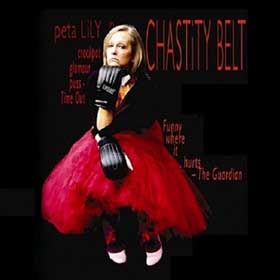 I remember Peta Lily from way back when she was working with the David Glass Ensemble. She was a mime, one of the best, brilliantly clever and brilliantly funny.

Her latest show, currently running at the Lion and Unicorn in Kentish Town, is very different, very much word led. A mix of standup and one woman play, the themes, loosely speaking, are sex, age, and womanhood. She performs easily, working the audience like the seasoned entertainer she is, dressed in red top and not quite matching long red fluffy skirt, which she removes after a while to reveal another shorter white fluffy skirt beneath, and bare legs. She riffs in a manner of styles from stand-up comedy to poetry on all sorts of not always linked topics such as Diana (the goddess, not the dead princess, as she assures us), Hindu goddesses with multiple arms and Lysistrata. She works with all sorts of props including a couple of tennis balls at the end of a piece of string that double as various body parts, female and male, a bow and arrow and a mini bottle of gin. And tonic. There is a bit of audience participation and a bit of panto archery, and a couple of songs.

The end result is patchy. Some of it is very funny – I almost fell off my seat at a throwaway remark about how chastity belts would actually have killed off the women with septicaemia caused by rust; and another not-so- throwaway line about the Virgin Mary’s ‘one-way vagina’. Having gotten over the surprise – and slight disappointment – that this was not going to be a mime show it was very easy to sit back and enjoy the nonsense. She dips her toes into potentially fascinating territory: what if, for example, Lysistrata – she who persuaded the women of Ancient Greece to withhold sexual favours from their menfolk in order to bring an end to the Peloponnesian Wars – were to come back today? Could a sex strike stop our wars? But having dipped the toe she doesn’t go much further in other than to suggest men could be prohibited from going to the gym.

Ultimately, therefore it is a slightly frustrating evening. I found myself looking for, longing for even, some kind of narrative, rather than a string of related yet unconnected sketches, some of which – the Hindu goddess for instance – were not really so funny or incisive. That said she is such an assured performer in her stylish, self-mocking and often quite goofy way, it is impossible not to be carried along. The audience last night were on their feet at the end.

Maybe it is churlish of me to feel just a wee bit saddened not to have seen more of the glorious physical-theatre talents of the Peta Lily of days gone by.

Veteran performer Peta Lily takes us on a cultural whirlwind as she resurrects the goddess Diana (but as an older woman), gives a startling evocation of Hindu Goddesses Durga and Kali, mourns the death of Matriarchy, celebrates Rakish behaviour and sings her heart out in a pell-mell 60-minute show.

Chastity Belt is a journey through shifting perspectives on Chastity. In the midst of our ‘over-sexualized society’ one woman has decided to pack up the pleasures of the past and embrace a new view on life. Swerving smoothly between sour grapes and celebration, she hosts her audience along on a journey from the personal to the historical and mythic and back again. She counts her ex-lovers, channels the goddess Artemis and updates Lysistrata.

If the audience were to be exposed to full versions of the seventy-four songs listed in the programme, it would be a very long show indeed. I suppose … END_OF_DOCUMENT_TOKEN_TO_BE_REPLACED

How can a play be both charming and devastating? Through its tight script, abundant humour and pitch-perfect performances, 4th Country manages to … END_OF_DOCUMENT_TOKEN_TO_BE_REPLACED

Britain, so a London cab driver once told me, is obsessed with the Second World War, as though it happened just recently. Power Luncheon would seem, … END_OF_DOCUMENT_TOKEN_TO_BE_REPLACED