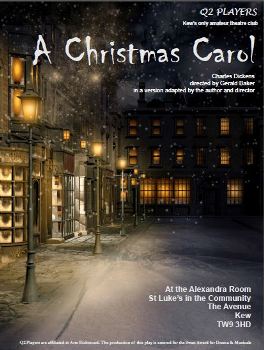 It’s beginning to feel a lot like Christmas! And heading down to St Luke’s Community Centre in Kew to see the Q2 Players in this year’s A Christmas Carol did feel very Christmassy indeed. The familiar story of the crabby, mean Ebenezer Scrooge who is warned about his miserable demise should he not discover the true meaning of Christmas and become charitable and loving, is one that is universally relevant, especially during these austere times. Scrooge, who shuns Christmas and family, is visited by the ghost of his late business partner Jacob Marley, and then the ghosts of Christmas Past, Christmas Present and Christmas Future who show him the error of his ways. It’s a hopeful fireside tale that everyone can learn from.

Beautifully directed, this version demonstrates that even a fairly busy story, like Dickens’ festive favourite, can be gorgeously portrayed by a small cast through innovative playing and without lots of involved set, lights or costume. The tale is narrated by the actors who each step into character to enact the scenes. Instead of using a script the Q2 Players have gone back to Dickens’ original words and it is lovely to be reminded of the descriptive talent that made Dickens so popular. It’s a great method because it allows for the easy blending of humour alongside the darker aspects of the story. Foregrounding the original text also lets the audience use their imagination with the players as aides and illustrators, and so the poverty of the Cratchits, the festivities of the Fezziwigs and the cold streets of London are rendered in the audience’s mind just as if one was reading the book. The characterisation which is inherent to Dickens’ style is faithfully portrayed by this enthusiastic and talented cast.

It was a lovely outing, and one that was enjoyable for people of all ages, children and adults alike. Immensely watchable, the Q2 Players rendition of A Christmas Carol gave me a warm fuzzy glow – exactly what one needs at this time of year.

Q2 Players: Kew’s only amateur theatre club
A Christmas Carol by Charles Dickens
Directed by Gerald Baker in a version adapted by the author and director
Alexandra Room
St Luke’s in the Community
The Avenue
Kew, TW9 3HD

It’s a production of Hamlet that starts at 7:30pm and manages to come down on the ‘right’ side of 10:30pm - the hardcore fans and followers of … END_OF_DOCUMENT_TOKEN_TO_BE_REPLACED

For seasoned theatregoers, this version of The Three Musketeers comes across as one of those shows that takes a similar format to something one has … END_OF_DOCUMENT_TOKEN_TO_BE_REPLACED

Already in a good mood because there is abundant free parking after 1.30pm on a Saturday (and all-day Sundays) near the venue, Little Angel Theatre’s … END_OF_DOCUMENT_TOKEN_TO_BE_REPLACED

There’s an air of familiarity for people who have been in the entertainment industry in this narrative. Global pandemic or not, supply always exceeds … END_OF_DOCUMENT_TOKEN_TO_BE_REPLACED

This was originally meant to be called West End Musical Christmas, and got postponed as the Government had no choice but to impose another lockdown - … END_OF_DOCUMENT_TOKEN_TO_BE_REPLACED