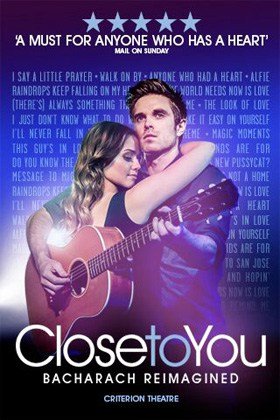 From the moment you enter the Criterion Theatre to see the amazing patchworked carpet effect of Christine Jones and Brett Banakis’ set design with its onstage sofas – some even suspended in mid-air – it’s clear to see that there’s something special about Close To You Bacharach Reimagined. Transferred from a successful summer run at the Menier Chocolate Factory (where it had the slightly different title of What’s It All About?), the show now offers its shimmering warmth and endless charm to get us through the darkening autumn nights.

And that patchwork effect is one that mirrors the nature of the show itself. Conceived by Kyle Riabko and David Lane Seltzer, Close To You offers up fresh reinterpretations of Burt Bacharach’s considerable songbook but rather than a straight set of song after song, the material is woven into a rich tapestry of medleys, repeated refrains, lyrical connections and snatches of melodies – an audacious reimagining but one that is hugely effective as it acts as a reminder of the extraordinary body of work Bacharach has composed with lyricist Hal David among others.

Steven Hoggett’s direction captures much of this fresh, contemporary feel with hints of his customary flowing choreography threaded through the performance, bathed in the wonderfully warm glow of Tim Lutkin’s lighting design with its myriad lampshades. And though there’s no formal narrative in the show, there’s always a strong impression of the stories behind the songs by the vastly talented company of singing multi-instrumentalists led by Riabko – Daniel Bailen, Greg Coulson, Anastacia McCleskey, Stephanie McKeon, Renato Paris, and James Williams.

And what songs they are, more than 30 appear with tunes like ‘Alfie’, ‘Anyone Who Had a Heart’, ‘Walk On By’, ‘Raindrops Keep Falling On My Head’, and ‘Magic Moments’ to name but a few. And Riabko gives them a fresh infusion of life here, respectful but reinvigorating as ‘I Say A Little Prayer’ gets a little funky, ‘I’ll Never Fall in Love Again’ becomes a touching male duet of forlorn hope, ‘Magic Moments’ sparkles as if enchanted, ‘Don’t Make Me Over’ transform into a scorching torch song. The genius of Close To You Bacharach Reimagined is to remind not just how good his song-writing is but also to demonstrate how timeless his musical gifts are.

Having triumphed in New York with rave reviews, the wildly successful celebration of Burt Bacharach’s songbook Close To You transfers to the heart of London’s West End.

The show premiered to critical acclaim at New York Theatre Workshop, original home of both Once and Rent, becoming the longest-running show in the history of that theatre, followed recently by a sold out and highly acclaimed run at The Menier Chocolate Factory.

Directed by Olivier Award-winner Steven Hoggett, performed by a young group of multi-talented musicians and led by the visionary musician and performer Kyle Riabko, the show features thrillingly fresh yet beautifully faithful re-interpretations of Bacharach’s classic songs, blending nostalgia and innovation, so that generations young and old can discover the magic of Bacharach’s music as if for the very first time.

Close To You: Bacharach Reimagined comes complete with Bacharach’s official blessing, the great man himself declaring: “It’s a love letter and truly unique. I love it!”