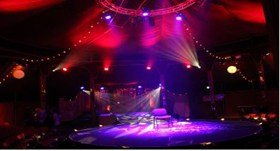 Ladies and Gentleman. They are back from down under. Brace yourselves for a summer of riotous and risqué comedy. That’s right, the marvellous EastEnd Cabaret are back on home shores.

Last night saw them announce their arrival home in style as they hosted Club Perverts in the beautiful Spiegeltent down at the Southbank Centre.

Of course, Mr Smith and I could never pass up an invitation to go and join the fun, especially as I had been granted an interview with the illustrious duo after the show. Outside the tent, the atmosphere is buzzing. Folk are perched aloft the faux dodgem cars and waltzers that serve as seating. The drinks are flowing and it is a balmy, early summer evening. It had the makings of a most romantic evening. However, I was alone with my thoughts (and my beer, obviously) as Mr Smith had wandered off somewhere. He said that he was looking for sustenance although the food stalls were right behind me and he had previously been giving the glad eye to one of the security staff. Make of that what you will.

Anyway, he returned in time for us to take our seats. In a break from the norm, EastEnd cabaret were hosting a show with other performers but needless to say they were the main attraction. The pair appear to have got a little more edgy since I last saw them (which seemed an impossible feat!) At the begining Victor/Victoria is sent forth out into the crowd to purloin two worthy gentlemen to become to a man-beast. This said beast is then required to chaperon the enchanting Bernadette onto the stage as she sits astride their backs. There is something rather tittilating at the site of two burly men, on their hands and knees being ridden by a bejeweld “mistress”. I am sure that the experience will linger in the memories of both them and the countless other gentlemen whom have been lucky enough to find themselves in the same (dis)position!

The beguilement continues as they launch into a musical selection, including a reworking of their song about deflowering virgins. There is absolutely no doubting the fact that the delightful, if somewhat heteroclite pairing of a dazzling ingenue and a heteromorphic hermaphrodite is the stuff of pure genius. Especially when they both hail from some ambiguous Eastern European destination and live their lives sharing a bedsit in the East End of London. When written down, it sounds like a premise that should have stayed on the drawing board but it has given us an award winning, international act that shows absolutely no sign of slowing down anytime soon. In fact, the first ever studio album has been produced and is available now! The album is appropriately called “Perverts” and includes such titles as “Accidental Anal”, “Golden Showers of Tokyo” and “Tiny Sex Robot”. (I’m guessing and indeed hoping that the theme need no more explaining)

As I mentioned, Club Perverts was also a vehicle for other acts. Le Gateau Chocolat is a larger than life gentleman whom, whilst somewhat compressed into a one-piece swimsuit sings with a commanding voice. If the audience were not already apprehensive about anymore participation, the invitation to some to lick his chocolate balls was enough to set off audible palpitations.

Ruth Less is a hard act to explain. She came out to a comedic voice over, telling us a story that was then represented before our eyes. It was funny, weird and somewhat disturbing. There are hardly any words to describe this masked creature who gave us some life lessons. Trust me when I say that you will not have witnessed anything quite like it before. 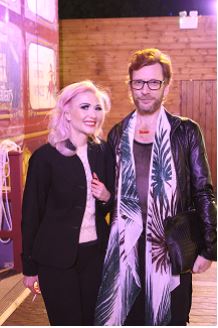 Gypsy Germaine Wood arrived in the guise of a beauty queen. Miss Teen, South Carolina 2007 to be precise. In true pageant style we heard her hopes and dreams for a better future and world peace and the like. She then went into her speciality act. I certainly won’t give out any spoilers but it is a piece of interpretive dance that will leave an impression (and possible a stain) on you long after you leave the tent.

The last of the special guests was Scotee. Imagine a fully grown man in a sequined baby-gro. (if you have read this far then this surely will come as no surprise to you!) Scotee performs origami, of sorts. With no words but subtle facial expressions he manages to have the audience in peals of laughter. The culmination of the act is a regurgitation that had everyone gagging and gives a whole new meaning to deep-throat!

Our starlets come back to end the show. There are more songs. A medley of some of the new material. The audience are also encouraged to ingratiate themselves with the person next to them. It is suggested that we all put our right hand on to the leg of the person next to us. Then, as the hands move higher, the lights go out. You are free to do what you will. I was sat on the aisle therefore left with my hand dangling in mid-air, somewhat redundant. Typical. Club perverts only has one more outing and that is next Friday.

The Interview
Me: So, how was Melbourne for you this year?
VV: It was lovely. It was the third stop on our Australian tour. It was really nice. A full comedy festival.
BB: It was intense as well. We did Perth and Adelaide and they were lovely fringe festivals. Like family. But then you go to Melbourne and it’s a full on comedy festival. The audiences just want to see men in jeans telling jokes. And we are not that. We have to work a bit harder to get them to take you seriously but then once you get them in, it’s amazing. They love the filth, they really do!

Me: So what were the highlights of the festival for you?
VV: Probably drinking at the Hi-Fi club and dancing, that was pretty good.
BB: But again, there was just a lot of weird comedians.
VV: I was mainly just trying to psyche them out on the dance floor. They’re trying to be really cool and I’m all “You aint got nothin’ on my moves”
BB: I didn’t hang around for that, I’m thinking “I don’t even know her”
VV: I didn’t even know that she was gone. I was like “Where did you go when I was psyching people out with my moves?”
BB: Victy calls them dance moves. I call them an embarrassment to humanity.
VV: On the recording [of the interview] you can’t see what I’m doing but I’m doing really cool hand movements! 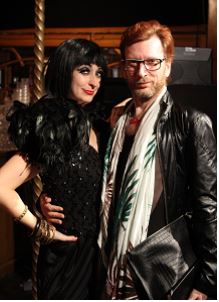 ME: OK, so you’ve got the new album out. How excited are you about that?
VV: Sooooo excited. It’s really f*cking great. When we got the delivery the other day I was “Oh my God, this is so great”
BB: She was sniffing the boxes!
VV: I was sniffing boxes.
ME: So, you’re now addicted to sniffing boxes?
VV: Is that a surprise to you?
ME: …….NO………
BB: it’s been a long time, even since we were little, you know making recordings on tapes. Then we moved into the bedsit and we’ve made recordings. It’s bad. You can hear the neighbours shagging and coughing.
VV: And shouting “Shut up!”
BB: So to actually go to a studio was pretty epic and they were really nice.
VV: And they were so good. You know we had a backing band. Sounds really rock and roll.
BB: Yeah, way more rock and roll than Victy!
VV: But I’m in it! I was also in the band. It was me and a bunch of  other dudes.

ME: Have you thought about getting in any of the big DJ’s to start doing some remixes of the tracks?
BB: Yeah, I wan’t that guy, what is he? Mighty Mouse?
VV: What, is he a DJ?
BB: You know, the mouse guy.
VV: Dangermouse?
ME: Deadmaus?
BB: Oh right. I’m really up with the DJ’s.
ME: What exciting plans have you got for Edinburgh this year?
BOTH: Erm….no. We’re taking a year off. At this point I scribble out the next few questions.
VV: Instead we’re staying in London. We’re doing two weeks at the Soho Theatre.
BB: We’re staying in London which is really exciting. We just haven’t announced that yet!
VV: (whispering) That’s an exclusive!
BB: We are also going to be doing some filming. We will be making some music videos. (Obviously at this point I proffered my services to try and shoehorn my way into one of those!)

ME: Now, have either of you ever considered going solo now that you’re getting so big?
VV: What?
BB: Well obviously me. I could always go solo. *interjections of NO, NO, NO are coming from Victy.
VV: Scrap that question. It’s EastEnd cabaret, there’s two people. The recording then became a cocophony of sound. I retrieved snippets of Victy claiming that the act could in no way work without her although Bernadette claims that she has been trying to go it alone since the age of 21. That’s definitely a can of worms that the lid has been firmly glued back on.

ME: You’re now a worldwide success. You’ve won awards. You have an album. Have you ever thought of getting out of the bedsit?
VV: NO. AGAIN. SCRATCH THE INTERVIEW. NO!
BB: At the moment, I’ve been trying to find two bedroom places.
VV: We don’t need them though.
BB: Things keep coming up. I find a great place and she’s like “this one has mice in it”. “This ones too expensive”
VV: (changing the subject) For the record, we have Champagne, well Prosecco. (to me) Would you like some?
ME: I would love some.
VV: You’ve never said no to anything. That’s why we like you! Once the cork was popped the rest of the interview wandered off on so many tangents that it’s probably best that for all the parties involved to say it’s a case of what goes on the tape, stays on the tape. Needless to say, EastEnd Cabaret remain my 1 and a half favourite ladies and half favourite man. I’m definitely looking forward to seeing much more of them in the coming months.

Titus Andronicus is not usually a comedy, it is usually a bloody, villainous and vengeful tale, but tonight it is a comedy and a rather amusing one at … END_OF_DOCUMENT_TOKEN_TO_BE_REPLACED

This show is not without clichés - there are three of note in this production. Firstly, the French horn of the show’s title is personified, speaking … END_OF_DOCUMENT_TOKEN_TO_BE_REPLACED

There’s very little in the way of set in this show: aside from chairs, a few crash barriers and at one point, a red carpet, the actors’ movements … END_OF_DOCUMENT_TOKEN_TO_BE_REPLACED

South African born, but raised on the Isle of Man, Pierre Novellie is a true raconteur rather than just another 'stand-up' comedian. He says about his … END_OF_DOCUMENT_TOKEN_TO_BE_REPLACED

This show, Willy Hudson began by saying, is about himself. It is written by himself, is directed by himself and executive produced by himself. Almost … END_OF_DOCUMENT_TOKEN_TO_BE_REPLACED