Home » Theatre News » Consequences and The Book at The Space – Review 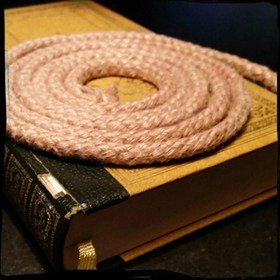 KinkyFish presents two plays by upcoming playwright Duncan Battman in this double bill of Consequences and The Book.

Does a confession of a murder matter if everyone affected by it is dead, including the murderer? That’s the question Consequences seem to ask. Two policemen discover a dead body that is already decomposing, and find a suicide note in the fridge which outlines a murder that the dead man Norman committed 15 years ago. When we enter the space, Norman is milling around the stage by himself, and as the policemen don’t notice his presence, we understand that he is the spirit of the deceased corpse in the bedroom, and he starts telling his story. The young woman he claims to have murdered, Cilla, also appears and some of their moments together is played out in front of us. Cilla, a prostitute and junkie, ends up living with the lonely librarian Norman as she’s hiding from a drug dealer she’s afraid will kill her. She’s a very complicated woman who at one point mentions having attempted to suffocate herself. Cilla tries to get clean while with Norman, and the two become close friends.

One of the policemen reveals he worked on this murder case, where someone else was convicted for the crime, and later killed himself in prison. Cilla’s mother has also died, and the policeman suggests that they should not reveal this suicide letter as it changes nothing, to his colleague’s horror.

At the end of the play, I was very confused. What did the policemen do with the information they uncovered? How did Cilla die? Did she genuinely want Norman to kill her? Is the Cilla we see his version of her or how she actually was? Did Norman also murder his own mother? Consequences doesn’t give you the answer to any of these questions, the audience has to make up their own minds. It’s deeply frustrating, but I like that the play doesn’t give you the satisfaction of a nicely wrapped up storyline, which is why I can’t stop thinking about it. Nicely done, Duncan Battman.

Compared to Consequences, The Book is both less engaging and even more confusing. After the interval, we are led back into the space, where one person is sat tied to a chair with a blindfold. He isn’t moving. Two guards dressed in black enter with a woman who is also blindfolded, and is tied to the second chair. While the first person says nothing, the woman recognises that there’s someone else in the room and tries to engage him in conversation. The guards enter and change the situation at times, removing the blindfold, and eventually untying them both. No one is ever tortured, which was my fear upon entering, and as the guards say nothing, there is no threat to the two characters on what will happen to them if they try to leave. You would think the first thing they would do is hatch an escape plan, but instead they engage in petty disagreements and banter. It is an interesting thought experiment, but it does drag on a bit. When it finally ends, you sit there wondering both what was the point of that and what the writer was trying to say. The best I can come up with is that we trap ourselves, because freedom is frightening. Perhaps I missed it, I don’t know. But after Consequences, The Book was a let down.

All in all, KinkyFish has presented two interesting short plays from a playwright I would like to hear more of. His themes centre around Freedom, justice and a sense of self – which are universally interesting. He has plenty of growth ahead of him and it will be interesting to see what he comes up with in the future. I enjoyed the performances of the KinkyFish Company and look forward to seeing them perform again. If I had to single out one person, it would be Pete Picton as Norman in Consequences. His performance was sublime, and his stage presence wonderful. I would love to see more of him.

All in all an interesting, albeit frustrating, evening.

8th-12th March 2016
KinkyFish Theatre Company proudly bring to The Space a unique double-bill of exciting new writing from contemporary playwright Duncan Battman, featuring the London première of THE BOOK alongside the company’s highly-acclaimed production of CONSEQUENCES.

CONSEQUENCES
Two police detectives find the corpse of an elderly man in the bedroom of his small home, whom they soon identify as Mr. Norman Watkinson, former head of a local public library. The discovery of a note complicates their investigation as they start to piece together Norman’s connection to a past missing-persons case – the disappearance of a young girl, Cilla Ward

Visually and stylistically intriguing, the present timeline of the detectives debating the impact and importance of the ‘suicide’ note – narrated by the dead man himself – is delicately and cleverly intertwined with the past timeline exploring the development of the relationship between librarian Norman and his alleged victim, young Cilla.

THE BOOK
Two strangers – thrown together as if by an unseen authority – find themselves blindfolded and bound within a stark and spartan cell. Uncertain as to why, or how, they ended up there, will they learn to trust each other as they come to terms with who is ultimately responsible for their own fate?

It is 2002 – another Royal Jubilee year, and HRH (Mary Roscoe) is due to open a new Science wing in a 'sink' comprehensive where Dr Derek Jones … END_OF_DOCUMENT_TOKEN_TO_BE_REPLACED

Dr Anna LaRosa (Dr Stefania Licari) has a lot to say. Just as well, as she’s the only one on stage in this medical comedy, which largely draws its … END_OF_DOCUMENT_TOKEN_TO_BE_REPLACED

Nikhil Parmar’s one-man show, originally written as a TV pilot, manages to touch on a wide range of themes from Islamophobia to modern fatherhood with … END_OF_DOCUMENT_TOKEN_TO_BE_REPLACED

Handel’s 1738 opera Serse (or Xerxes) is an exploration of power, love and human frailty. King Serse falls in love with the voice of his brother … END_OF_DOCUMENT_TOKEN_TO_BE_REPLACED

Lea Salonga has her fans. She also has some superfans, the ones who yell, “I love you Lea!” at almost every opportunity. If that wasn’t enough, there … END_OF_DOCUMENT_TOKEN_TO_BE_REPLACED