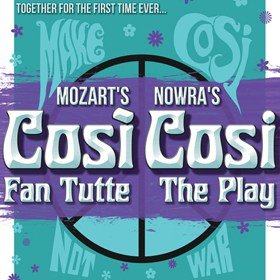 When you’ve been going to the London theatre on and off for fifty years, as I have, surprises are few and far between. This can lead to a disagreeable sense of “been there, done that” which is not just depressingly world-weary but especially unhelpful if you’re trying to be an objective critic. After all everyone sees Hamlet for the first time at some point in their life! Which is why, when something truly remarkable happens, as it did last night at the King’s Head in Islington, you really do want to shout it from the rooftops. Well an evening including a fine and original production of Mozart’s Cosi Fan Tutte and Australian dramatist Louis Nowra’s play Cosi sounded promising – and it exceeded all expectations.

The Theatre’s Artistic Director Adam Spredbury-Maher wanted us to know that it was the first time ever the two works had been performed together – sometimes (as last night) in succession on the same day. He was right to be proud and the reception the evening received from the many of us who attended both productions will have confirmed to him that it was all worthwhile.

Cosi, the play, was written in 1992 and is set in a Mental Hospital in Australia in the late 1960s. The Vietnam War is a very present backdrop to the drama. The authorities have decided that the patients would benefit from being involved in a theatre production and have hired Lewis, an actor and tyro Director, to do this. Roy, a bravado performance by Mark Little, is a once actor who has succumbed to chronic depression and been placed in the Hospital’s care. He wants to put on Mozart”s Cosi Fan Tutte – a preposterous notion given that the patients who have volunteered have no performing or musical experience.

Before Cosi the play began we enjoyed a complete performance of the Opera. The “King’s Head” has a small stage so there is limited room for a full-scale opera. But Cosi Fan Tutte is an ideal choice because it has few characters and no chorus. For both space and no doubt budgetary reasons the musical accompaniment was limited to an upright piano – beautifully played by Musical Director Elspeth Wilkes. The setting was the present day, in modern dress and with clever use of a couple of video screens. This was significant. A recent production at the Metropolitan Opera, set traditionally in 18th Century Naples was introduced, in the telecast I saw, by Renne Fleming with an extended apology for the misogynist nature of the plot and the idea that “there is no such thing as a faithful woman”.

Ms Fleming was all very politically correct – no doubt for her sensitive American audience! So by placing Cosi in the present day as this production at the King’s Head did there is an implication that the underlying idea remains valid! Well I certainly found nothing offensive – even on or close to International Women’s Day! The women are the stronger characters and the fact that the coquettish Despina persuades Dorabella and Fiordiligi to have a bit of fun whilst their soldier husbands are away seemed uncontentious, funny and authentic! After all can you expect “fidelity in a soldier” as Despina points out! No double standards!

The singing was quite excellent. The young cast was pretty experienced and clearly well trained in various schools of music and opera. If I single out Caroline Kennedy’s Despina it is only because her casting was very good – she is almost ideal in the role and I hope that the Royal Opera House and Glyndebourne were watching. She was, as a Despina needs to be, a delightful combination of naughtiness and sweetness – very pretty with a powerful melodic voice that belied her compact size ! A mention also for Steven East’s fine Bass-Baritone Don Alfonso – also beautifully sung and well acted. The ensemble singing was very good – Mozart wrote duets, trios, quartets and quintets for this opera and they were here all very well done. The voices have to work harder when there is no orchestral accompaniment and I felt that I heard the words (in English) better than I ever have before. The diction was good as well and nothing was missed. The production was bawdy without being vulgar but also very moving at times as well as being pacy without being rushed.

So the production of Cosi Fan Tutte set the scene for the play. What it did was show what a masterwork it is and how improbable it would be for in an untrained and largely unskilled team to take it on. What a silly idea. Well Louis Nowra has taken that silly idea and made a magnificent and engaging comedy out of it. It is very funny but at no time are we laughing inappropriately at the mental hospital patients who with varying degrees of enthusiasm try to do it. Each of the patients has their own mental health problems from Depression, through Obsessive Compulsive Disorder, to Pyromania and beyond. The Australian setting gives it an extra opportunity for laughter “Culture to most Australians is that stuff that grows on the Cheddar” says the Director at one point and there is more where that comes from! Julie the drug addict is a key character and she is beautifully played by the stunning Laura Garnier. Her addiction aside Julie is perhaps the sanest of all the patients and she is a marker – “I like it because I’m doing something” she says at one point revealing clearly what the whole idea is about. This is therapy, but not the sort that comes as a pill.

There is a subplot in Cosi which firms up the link with Mozart and Da Ponte. Lewis’s girlfriend Lucy (also played by Ms Garnier) is having an affair with his best friend Nick. This they both shrug off as if it is unimportant “I have sex with Nick but I sleep with you”. Cosi Fan Tutte – all women are like that. Now don’t tell Renee Fleming that and we know, don’t we, that is a joke! Or again is it real? Well one of the characters says “If I could handle reality I wouldn’t be here”. And the distinction between reality and fantasy is blurred. But the learning for the sane as well as the disturbed is profound “Working with these people has changed you” says Lucy to Lewis towards the end of the play. I’m not sure that she means it as a compliment but in fact it is. All the characters are changed for the better by the experience of putting on “Cosi Fan Tutte” and the climax of the evening, which I won’t give away, is quite outstanding.

I urge you to try and see both the opera and the play. This is something special I promise you!

Young theatre director Lewis is staging a production of Mozart’s comic opera Così fan tutte. The catch? The cast are patients from a mental institution, none of whom can speak Italian… or sing. Can this unlikely cohort, including an obsessive-compulsive, a manic depressive and a junkie, pull it off? Or will a patient with a penchant for pyromania spoil all the fun?

As Vietnam War protests rage outside and Lewis confronts the enormity of his task, he begins to realise the frightening and attractive power of madness, politics, theatre and love.

Have you ever loved two people at the same time?
Ever had an affair? Or wanted to have one?
Who says we’re monogamous anyway?

Everyone is seducible.
Tonight we’re going to put this to the test.
COSÌ FAN TUTTE by Mozart
Two couples. The boys swear that their girlfriends will always be faithful. The girls want to get married to their boyfriends. So where’s the problem?

A man called Alfonso gets the boys to play a game on their girlfriends. The boys just have to do exactly what Alfonso says. For 24 hours. Sounds like fun, right? What starts out as a game quickly becomes a car crash for lovers. It’s all played out for a TV audience. Come and find out who ends up with who, who throws the first punch and who is still in love with who at the end.

And the whole god-awful mess is set to some of the most sublime music Mozart ever wrote.
A new adaptation directed by Paul Higgins and Musical Direction by Elspeth Wilkes.

Some journalists get, as it were, a bad press, though some of them don’t help themselves with some of the things they write and do. This play doesn’t, … END_OF_DOCUMENT_TOKEN_TO_BE_REPLACED

Paul (Lewis Bruniges) and Freddie Metz (Oliver Yellop), who identify as cousins, are so desperate to get out of the German Democratic Republic, … END_OF_DOCUMENT_TOKEN_TO_BE_REPLACED

As you enter the auditorium of the Lyttleton, projected on a series of steep steps and onto the back of the stage are programmes, posters and other … END_OF_DOCUMENT_TOKEN_TO_BE_REPLACED

I was, and still am, greatly intrigued by Louise (Heather O’Sullivan) and the themes of control, I saw throughout Lowkey Dying. The play, written and … END_OF_DOCUMENT_TOKEN_TO_BE_REPLACED

Catch Me is a new musical written by Arnoud Breitbarth and Christian Czornyi and directed by Adam Lenson, that debuted in 2016 at the Arts Theatre in … END_OF_DOCUMENT_TOKEN_TO_BE_REPLACED