I once tried to explain in vitro fertilisation to a woman who was instantly dismissive: “Oh no, I don’t believe in something that’s not real.” I’m not sure how Alice Underwood would respond to such a remark, or even if she would, though her younger self, if this autobiographical production is anything to go by, might well have snapped at her to “shut up”. Alice – such is the informality of the show that it’s first name terms – tells her story in an unhurried manner. Despite claiming to be one of those people that assemble flat pack furniture by winging it and not bothering with the instructions, the show is structured well, introducing the audience to various parts of Alice’s life without flitting between decades. 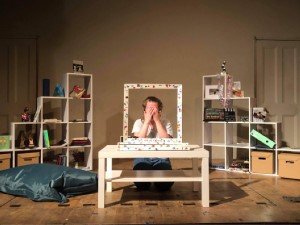 There’s no dropping a narrative on a cliff-hanger to start another one, only to return to the first one at some point later, forcing the audience to work to think back to where ‘we’ left off before. The staging as well as Alice’s good rapport with the audience give the production a living room ambience, and the audience is drawn into this refreshingly honest story, in which various family members are presented as gloriously human. They are no caricatures or stereotypes, there are no definitive antagonists or unequivocal protagonists. Even the fellow pupils that irritated Alice during her school years are portrayed as people who asked all sorts of questions because they didn’t know what they didn’t know, rather than people who were intentionally attempting to offend.

For reasons explained in the story, this ‘test tube baby’ doesn’t meet her biological mother, and as various life events are described, there are some deeply emotional scenes but also displays of sheer stoicism. Having the stage entirely to herself, there are occasional brief silences while Alice sets up the following scene, but these work well, giving some breathing space for both actor and audience, allowing the latter to take in whatever had just happened.

This is a story for anyone who has ever felt they were or are different from the majority, as well as for those who want a better understanding of what it is really like to have to deal with questions about one’s identity. An appropriate level of detail is given to follow the narrative easily, without being bogged down by too many minor technicalities. It also does well in overcoming a common shortfall in one-person stage shows, by providing an alternative perspective on the same event, allowing the audience to see both sides of the story.

At forty-five minutes long, the performance is relatively brief, but provides some astute observations on life and the world at large. This is, I think, the first time I’ve come across a production quite like this one – one that didn’t, after all, turn into an episode of Who Do You Think You Are? A one-act contemporary play without a critical incident (wow!) that helps one appreciate the good things in life.

“Donor Conceived Person? Honestly I think I prefer Test Tube Baby”
Alice has always been told she was special, but as she reaches adolescence she can’t help but think it’s just a nicer word for different.

Light-hearted but sincere, Don’t Ask Don’t Get, Baby explores a young woman’s coming of age as she comes to terms with being a Donor Conceived Person.

A love letter to Mums and Mothers, Donors and Doctors, this autobiographical storytelling invites you to  feel like part of it all. Intimate and informative, Alice takes you with her to make you laugh, let you feel and maybe make you call your mum more often.

Written and performed by Alice Underwood
Directed by Izzy Carney

Two sisters reunite after the death of their mother, and secrets pour forth. Robert Holman’s new play gently exhibits talented classical acting in a … END_OF_DOCUMENT_TOKEN_TO_BE_REPLACED

Everyone’s vexed in this show, though some have clearer reasons to be than others. Mrs Driscoll (Tameka Mortimer) is struggling with a home life that … END_OF_DOCUMENT_TOKEN_TO_BE_REPLACED

The penultimate production of the 2021 Tête à Tête Opera Festival, based at London’s Cockpit Theatre and showcasing contemporary and avant-garde new … END_OF_DOCUMENT_TOKEN_TO_BE_REPLACED

Relatively Speaking premiered in 1967 and is the sort of show that is, by contemporary standards, very much of its time, and not just because of … END_OF_DOCUMENT_TOKEN_TO_BE_REPLACED

For those who don’t know, MARIO is the title character of the bestselling video game franchise of all time, which began in 1983. These days he is an … END_OF_DOCUMENT_TOKEN_TO_BE_REPLACED