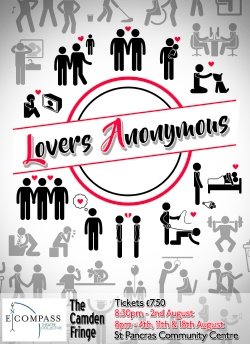 Interactive theatre can be tricky. When do you participate? Is it okay to keep quiet? What if you’re shy? Is this even really a play or did a friend just trick me into a self-help group? The latter question was posed by a woman sitting a few seats away from me, and if I hadn’t had the press release, I would’ve asked the same question. I was surprised when I walked into King’s Cross Community Centre and instead of a stage, I found an open room with a circle of chairs. I was welcomed in by Sandra, made myself a cup of tea and felt, to be frank very, very awkward and hid behind my laptop for a few minutes while observing people coming in.

Having a brain for patterns, I soon noticed several of the chairs were discreetly reserved with jackets or bags, and the people coming in to take the seats communicated with Sandra as if this was a regular meeting that most of them had been coming to for a while. Ah, these must be the characters. I shared this with the people next to me, who were just as bewildered as I was.

As the room filled up, the “meeting” eventually started, and I’m not going to lie, it was a bit awkward when the leaders Sandra and Mike opened up for people to share their stories about love. My sense of reality shattered completely when someone who did not have anything on their seat started talking. Now I truly didn’t know who were characters.

Thankfully the confusion was short-lived as the scripted characters started speaking and telling their stories and getting involved with the meeting. I don’t want to give too much away, but we were in the company of some rather sweet people who were unlucky in love and didn’t quite know how to get what they wanted, to truly connect with someone.

You can relate with some elements of every story and every character, and the show is both funny and rather sweet, with good physical comedy, interesting lights and sound effects (simple but effective with lights out, flashlights and using voice and foot taps to transform you into another moment), and the hour flies by before you know it. You do have to take part to a certain extent – I had to tell a complete stranger: “Wake up, you lazy bastard!” as if he was my lover falling asleep in bed, that was something else – and a piece of audience interaction towards the end could leave the show at a sweet or very awkward ending, depending on who happens to be in the relevant seat and how they respond.

This sort of theatre can be very exciting or very cringey, and thankfully it was the former. It was thoroughly enjoyable to step into the world of these characters, and the actors involved, who also devised the show, took every moment and ran with it, no matter what happens. This makes the show alive and truthful. It’s a bit silly, sure, but it’s also quite profound.

I would’ve liked to have spent more time with some of the characters, in particular, Mickey (Steven Calvert), whose story I wanted to know a lot more about. His moment was possibly the most interesting part of the play, with so much to unpack, and I felt it ended too abruptly. But I think there might be a whole play to be written about that character.

I absolutely adored every character in the show at some level, the slightly dysfunctional but well-meaning couple leading the meeting, Sandra (Rebecca Gibbs) and Mike (Edward Kaye), who clearly had problems with their own relationship, the outrageous Annie (Grace Wardlaw), who used every fibre of her being as a physical art therapist – with a random Mugabe name drop that made me laugh so hard!, the slightly sad but rather endearing Simon (Oliver Roy) and Clifford (Sebastian Porter) that made you feel for them. Not to be forgotten were the dynamic duo of the visiting experts Dr. Elijah Clunge (Joseph Prestwich) and Bianca Candida (Silvia Mannazone) that made us crack up so hard for very different reasons.

But the heart of the piece belongs to two characters, the quirky and slightly lost Olympia (Kelsie McDonald), who you just wanted to hug and had to root for, and the broken but hopeful Brian (James Dart), whose story got us back to remembering that love is rare and wonderful, and worth fighting for.

A beautiful hour of laughter and hope, which I would love to see developed further, possibly into a television show.

Funny and provocative, Encompass Theatre Collective’s ‘Lovers Anonymous’ is a brand-new comedy event devised by the company. We invite the audience to join a typical ‘Lovers Anonymous’ group-counselling session, where a variety of participants will tell their own stories, from Tinder thrills to courtly love, helping the group get a handle on sex, romance and love in 2018.

It is 2002 – another Royal Jubilee year, and HRH (Mary Roscoe) is due to open a new Science wing in a 'sink' comprehensive where Dr Derek Jones … END_OF_DOCUMENT_TOKEN_TO_BE_REPLACED

Dr Anna LaRosa (Dr Stefania Licari) has a lot to say. Just as well, as she’s the only one on stage in this medical comedy, which largely draws its … END_OF_DOCUMENT_TOKEN_TO_BE_REPLACED

Nikhil Parmar’s one-man show, originally written as a TV pilot, manages to touch on a wide range of themes from Islamophobia to modern fatherhood with … END_OF_DOCUMENT_TOKEN_TO_BE_REPLACED

Handel’s 1738 opera Serse (or Xerxes) is an exploration of power, love and human frailty. King Serse falls in love with the voice of his brother … END_OF_DOCUMENT_TOKEN_TO_BE_REPLACED

Lea Salonga has her fans. She also has some superfans, the ones who yell, “I love you Lea!” at almost every opportunity. If that wasn’t enough, there … END_OF_DOCUMENT_TOKEN_TO_BE_REPLACED