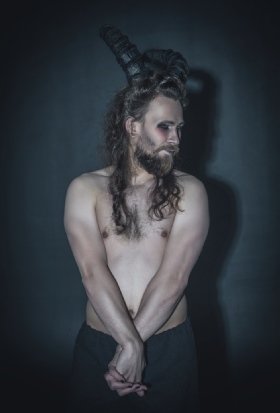 Faust Alberta is the second Time Zone production by Pamela Schermann at the Bridewell Theatre in the “Opera in the City” festival following the excellent Orfeo and Euridice. It is an original work by the composer Simone Spagnolo and this was its world premiere. A “Nameless Man” is in a remote cabin surrounded by frozen snowfields. He is not identified even to himself. The music is initially eerie – tonal and melodic but subtle and understated. The Man is indulging in self-analysis and a search for identity. He feels trapped and seeks an explanation. The musical rhythms strengthen to reinforce his existential dilemma and we become aware that this is to be an operatic monologue with some spoken words but mostly sung.

The man is played by the baritone Benjamin Bevan and his uber-musical voice seems to fit the part perfectly – there are no showpiece arias and the melodic theme flows. He is speaking to himself and we the audience are privileged but slightly wary, to be spying on him. Especially so when he starts to try and put his past together with artefacts – a record on a wind-up gramophone. A Teddy Bear.

He doesn’t know who he is nor where he is from, only that “something is after him” – a sinister but unseen and unexplained threat. The suggestion is that he has “fallen from grace” – has there been a Faustian pact with the Devil? This is implied as the explanation for his feeling trapped in a “debris of a life”. The libretto (by Giordano Trischitta) is as elusive as the music. You sense that it is up to us in the audience to make of it what we will over the nine scenes during which The Man tries to remember.

The music is consistently good throughout with changes in style to reflect the story. There are strong jazz influences at times and when The Man reveals that he has remembered Sarah, a lost love, we get a lyrical violin to support the theme that “There is no shame in loving“. He recalls that he once “looked ahead to his darkest night” – a night from which he is struggling to emerge. As the tension rises the music reflects it – the percussion part is exceptional and very well played by Ric Elsworth. At the end, The Man climbs a staircase to uncover a body covered with a shroud to which he is to say a “last goodbye“. Have the demons been banished? We cannot be sure but the man says there will be no Hell for him – but no Heaven either. A continued purgatory. There is a final enigmatic reference to “The Revenge Business” before the end. The allusions to the Faust legend implied in the title were, I thought, fairly subtle and the Opera works also as a stand-alone parable of our times. The Man clearly once had a choice – he had been born free. But now he was in metaphorical chains from which it was perhaps too late to escape.

A Nameless Man finds himself in a remote cabin surrounded by frozen snowfields. He doesn’t know who he is nor where he is from, only that something is after him – an unstoppable machine that hunts those who fell from grace. In nine scenes, he tries to collect his memory. Triggered by snippets from his past, he slowly starts to put the pieces together.

I was quite excited to attend this festive sold-out production. Going into Fairytale of New York, I had little idea about what I would be watching. I … END_OF_DOCUMENT_TOKEN_TO_BE_REPLACED

The beautiful game. Or not so beautiful perhaps. Score a goal, win a cup, get the car and the house and the girl. Bask in the glory. Drink in the … END_OF_DOCUMENT_TOKEN_TO_BE_REPLACED

The title character in Kerry Jackson (Fay Ripley) is a paradox, at least on paper, a Leave voter who runs a Spanish restaurant and, as her chef Athena … END_OF_DOCUMENT_TOKEN_TO_BE_REPLACED