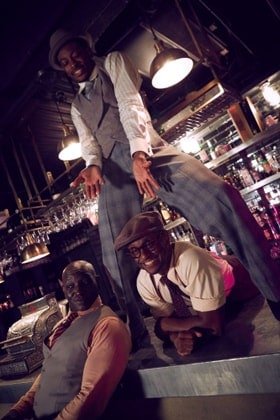 I usually try and start my reviews with a brief synopsis of the plot but in the case of Five Guys Named Moe that will be difficult because it’s pretty flimsy, to say the least.

Shambolic Nomax (played by Edward Baruwa) comes home all dishevelled after a heavy drinking session as he bemoans the fact that he’s having trouble with his girlfriend Lorraine he tries to call her but she won’t pick-up. He turns on the radio to hear the sound of Louis Jordan’s music coming out of the speaker. Then as he bemoans his fate, five men dressed in zoot suits from the forties emerge from inside the radio, from out of the drinks cabinet and even from the chair he’s is sitting on. These are the Five Guys Named Moe and they’re about to instruct Nomax about how to get Lorraine back – and that’s about it for the plot!

Five Guys Named Moe is all about watching some terrific performances, hearing some superb music and having a party to the jumping jive of Louis Jordan. Whilst it may not be the very first jukebox musical, it’s certainly one of the first and although it’s been re-imagined since it debuted at the Theatre Royal Stratford in 1990, it’s a lot of fun if you enter into the spirit of it.

Some of the songs such as “I Like ‘Em Fat Like That!” are sexist to say the least – one of the characters even apologises for any chauvinism in some of the songs. And as a piece featuring six black actors, at times it seemed a bit anachronistic in the twenty-first century. As Clarke Peters who wrote and directed the show says in his programme notes “Young black men today are not the same as they were twenty-five years ago” – “The Scottsboro Boys”, it ain’t. But if you’re into audience participation, singalongs and conga lines into the bar at the interval, then this is the show for you.

The Marble Arch Theatre is London’s newest performance space located in a Spiegeltent just a few feet away from the Arch itself. The foyer is decked out as a New Orleans jazz club with a band playing on a platform above the bar and real American candy available in the merchandise shop in the foyer. It’s a lively atmosphere which carries on into the auditorium with even the front of house people singing and moving to the pre-show music. The auditorium has cabaret tables in the middle and a circular walkway around it dividing those who paid a premium to sit in the bullring from the cheaper seats on the outside. There’s a stage at one end of the room with the band seated at the back but a lot of the action takes place on the walkway which revolves taking the performers around and keeping the action moving.

All five guys and Nomax are excellent. Ian Carlyle (Four-Eyed Moe) is the slightly camp, foxy character. Idriss Kargbo (Little Moe) is full of energy and pizazz and sings like a dream. Dex Lee (Know Moe) is the sexy one and along with Emile Ruddock (Eat Moe), tap dances superbly on the cabaret tables. The choreography and musical staging by Andrew Wright are animated and full of life and Steve Hill leads a terrific six-piece band that gives justice to the 27 Louis Jordan songs including the better known once such as “Saturday Night Fish Fry” and “Let The Good Times Roll”.

So, if you’re looking for a great night out and you feel like partying, this is the show for you. I suggest you get there early, have a couple of mint juleps and enter into the spirit of Five Guys Named Moe – you’ll have a ball.

Nomax is single, broke and drinking his sorrows away when five guys named Moe – Big Moe, Little Moe, Eat Moe, Know Moe and Four-Eyed Moe – appear out of nowhere to help him straighten out and sing and dance his way to love!

A once in a lifetime experience awaits as you enter the Marble Arch Theatre, designed specifically for the show. Be transported to a red-hot 1940s New Orleans jazz club, complete with a wonderfully authentic cocktail bar and band-stand.

Featuring the irresistible hits of the original king of jazz Louis Jordan, including Is You Is Or Is You Ain’t My Baby, Early In The Morning, Choo Choo Ch’Boogie and, Saturday Night Fish Fry, Five Guys Named Moe is a theatrical event like no other.

Directed by Clarke Peters (The Wire) with musical staging and choreography by double Olivier Award nominee Andrew Wright (Half a Sixpence, Singin’ In The Rain, Guys & Dolls), inspired by Charles Augins’ original choreography.