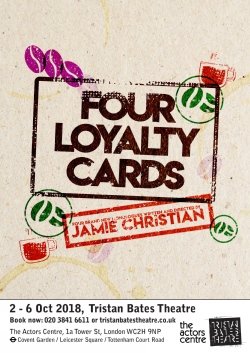 Four Loyalty Cards is a series of 4 monologues written and directed by Jamie Christian. It is currently playing at The Tristan Bates Theatre.

The concept is that the four monologues are unconnected apart from a small detail – each character is in the possession of a stamped loyalty card from Café Nero, and each piece begins its story within a Café Nero branch.

For me, it was a bit like an Alan Bennett’s Talking Heads but for a 2018 audience where Grindr, selfies and spinach smoothies are part of daily life!

Each of the monologues is short at around 15 minutes long, however, each piece is engaging and, in some cases, very funny. After reviewing the pieces, I am in admiration of Christian’s ability to craft complex characters with full backstories and showcase them in such a concise way in such a small amount of time. He succeeds in creating a universe where four separate worlds collide successfully.

The way in which Christian has juxtaposed the monologues is insightful. It provides the audience with a glimpse into various sub-sections of society; more so a version that we are not familiar with ourselves. The four pieces are all very different. They are performed by actors of different genders, skin colours and ages, however, as a collective piece, Four Loyalty Cards presents its audience with a beautiful one-hour production illustrating how different people deal with loneliness and fitting-in in differing ways. Maybe a comment here on how we all cry out for acceptance and want to fit in! The real loyalty we want being from others, rather than our coffee shops!

Throughout the production, all four characters are on stage in tableau. As each person performs the others sit waiting for their time to step into the spotlight: a chair at the front of the performance space, so they can tell us their story.

Due to the performance space being very intimate, it really does feel like each character is talking to directly to me. A great device to have with small audience spaces and especially effective for monologues and soliloquies.

First up is Alwyn, performed by Blake Aidan. Alwyn is a Welsh millennial living the gay scene in London. This is a clever and enigmatic piece which allows us to dislike the characterisation of Alwyn, but also feel for him. Alwyn feels his struggle is real, maybe first-world problems are the society he lives in.

Next up is Body Pump with Trump – this was my favourite monologue of the four. Sheree Kane is a pure delight to watch. Kane brought her character to life beautifully. Maybe a fantasist, maybe a liar maybe a woman suffering from mental health issues – either way, I believed that her character believed every word that she was telling us. Kane’s delivery allowed us to enjoy her stories and laugh along with her.

In third place was Victoria’s Secret, an interesting piece – this is the only character in a relationship, but it appears she may be the loneliest of all our protagonists. Marissa Joseph portrayed the character of Victoria as someone who isn’t relatable, someone who appears to be more in tune with her healthy living practices than the world around her.

The final monologue is Fast Fuse performed by Danny Parsons, an all-around good guy who likes to please, someone who goes over and above to leave a good impression with those he meets, but again in his quest for connections fails to find self-satisfaction or comfort. This piece was cast particularly well, you could see the pain in Parson’s eyes as he regaled his story with his brush with Hollywood fame.

Each character that Christian created was hugely interesting and I would be keen to see any of these characters explored more in full pieces.

Following on from a sold-out showcase as part of the John Thaw Initiative, Jamie Christian is proud to bring Four Loyalty Cards to the Tristan Bates Theatre. Four Loyalty Cards comprises of four monologues which are unconnected apart from a small detail – each character is in the possession of a stamped loyalty card handed out at a coffee shop – where each piece is set.