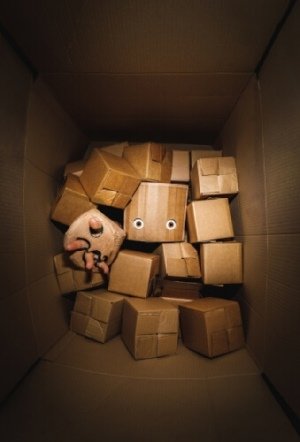 Pre-show, the cast are on stage. Unusual, perhaps, but hardly unprecedented. What is striking about the characters in Fulfilment is that before the lights go down and the show starts proper, they have got to be the glummest looking people I’ve ever come across at the Edinburgh Fringe. I’ve been high fived by stand-up comedians on entry, or otherwise been very warmly greeted, and one show I saw in 2018 even had its cast going around painting glitter on the faces on anyone who was happy to have some.

There’s a reason, however, for the sheer despondency. I happen to be an Amazon Prime customer and rather like the next day delivery service that’s available, and if I’m keen, for instance, to get started on reading a novel or a play script, I do that thing where I login to Amazon to track where my delivery is. Amazon is kind enough (sometimes, anyway) to tell me how many stops the delivery driver needs to make before arriving at my address. But what must take place to ensure that I, and many people like me, get their goods sooner rather than later?

The answer is gradually exposed in increasingly harrowing stories about working conditions at an Amazon Fulfilment Centre (one can’t call it a warehouse, apparently, in line with company policy). The demands on staff are relentless at best and opaque at worst – one employee is told she is not meeting her ‘targets’, when she asks for clarification as to what these targets are, her pathetic excuse of a manager simply replies that he doesn’t know, but absurdly reiterates she is falling short.

So far, so bizarre. If only the show had carried on in this way throughout, recounting stories supplied to the creative team by people who worked in Fulfilment Centres, going on to include what they did with their spare time (if they opted to do anything) and perhaps even including the opinions of friends and family, who no doubt would have been able to tell noticeable changes in behaviour on someone who is having such a hard time at work.

Instead, there are regular audience interactions with ‘Robox’, brilliantly voiced by Claire Parry, supported by Phoebe Hyder and Ronan Cullen, a device that is intent on learning about the audience’s preferences. These, in the end, form a kind of comic relief from the harrowing stories from Fulfilment Centre workers, and if the over-the-top nature of proceedings would be rather overkill outside the Edinburgh Fringe (at one point, the robot decides to propose to a member of the audience in the front row, and the said audience member goes with the flow and ‘accepts’), it works. A couple of exercises also engages the audience’s minds, particularly one in which our ‘dreams’ were to be jotted down – at the risk of giving too much away, Robox then suggests items from the Amazon catalogue that would assist to achieve those dreams.

It is away from the frolicking of the robot offering biscuits and then ‘learning’ that customers like food that the play comes into its own. The managerial style at Amazon is portrayed as draconian – one employee is reprimanded for being late although she used the shuttle bus service that Amazon told her to use, and one can’t help it if there is gridlock. Aside from the physical fatigue caused by rushing around the centre for more than ten hours a day, picking out item after item for despatch, it is the psychological and emotional toll that is palpably dramatized. I’m not the most empathetic of people, but even I wanted to hug Phoebe Hyder’s exhausted, burned out, and suddenly unemployed character.

This is an important and engaging show that rightly highlights the consequences of convenience shopping.

What really goes on in Amazon Fulfilment Centres? Award-winning company SharkLegs return to the Fringe with their new show Fulfilment, interrogating the true price of next-day delivery.
Disarmingly funny and playful, the show is created live every night aided by the desires of the audience. This shocking piece of theatre explores what it takes to fulfil our ever-increasing consumer demands.
Robox is your personal fulfilment device – the one-click wonder, the ultimate convenience. You dream it, he delivers it – instant fulfilment. Robox discovers what the audience need, what they want and what they dream of. They just sit back and let Robox deliver.