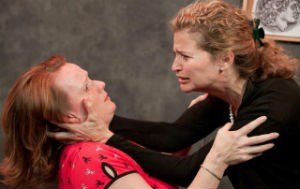 An impressively complex collage of issues and themes – pertinent and potent in their telling – motors Gidion’s Knot; a taut two hander by Johnna Adams. Courting the salience of acute sensitivity in the classroom (as embodied by the American programme, ‘Prevent’, which encourages teachers to ‘out’ would-be terrorists spotted in the place of learning), a delicate narrative unfolds between grieving parent and teacher.

Matters unfold as the mother (Miranda Wilson) attends her son’s school for a meeting about his suspension in spite of the fact that he has recently committed suicide. Obvious questions emanate: is the meeting too soon? His former teacher, Heather Clarke (Rachel Fowler), believes so. Does the appointment still even matter? The grief-stricken parent certainly thinks that it does. Well, after all, the mother’s questions are many; and yet the teacher’s reluctance to divulge is fierce. There is a cagey cat-and- mouse frisson to the exchanges between the pair, as hostility and sympathy collide.

Sometimes a little too stagey, it is nevertheless an engaging encounter and one that eventually pays off in the latter stages of the drama. The apex of the escalating tension is the reveal of the story that the boy had written and the source of his suspension from school. A shiver reverberates down the spine as the tale is told. A horrified teacher is narrator, a sympathetic mother its audience. Divergent views on his work prompts conversation, as we hear conflicting attitudes and views on the comprehension of art. We consider how, in times of panic and fear, freedom of expression can be censored by conservatism.

The success of the play’s regale falls heavily on the shoulders of the two leads. Both Wilson and Fowler offer compelling performances that ebb and flow with a satisfying dynamism. Lasting barely over and hour, this is theatre stripped to its most direct. Foregoing any interval is a sensible move by the director, Matthew Hahn, as this ensures that the crescendo is all the more powerful.

Adams’s work is not afraid to throw all the pieces up in the air without organising them once they land. This boldness is perhaps Gidion’s Knot’s greatest strength. There are no easy answers to this matter. It is worthy of discussion and debate, however, and this is what this material prompts. Too urgent to be placed on the outskirts of the fringe theatre scene, this deserves the attention of many, many more.