Home » Reviews » Heather and Harry at The Landor – Review 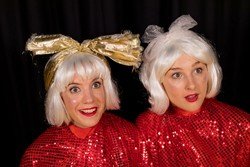 Heather and Harry portrays itself as “a story about the disease we call love”, but this isn’t, ultimately, a dark storyline. Sarah Kane’s play Cleansed crossed my mind as the show introduced love as a ‘disease’, something which causes destruction at worst and inconvenience at best. A sense of otherness (and perhaps absurdity, or at least absurdism) stops this production from being preachy: it certainly sends forth a message of ‘love thy neighbour as thyself’ without presenting a roadmap as to how people can live in relative contentment.

There is no need to forsake personal ambition, and no requirement to quit one’s employment and go off on some zany quest to achieve self-actualisation, whatever that may involve. It’s small – and thus highly achievable – steps that need to be taken: give someone a meaningful hug, phone an old friend you haven’t spoken to for some time, accept someone for who they are, and so on. (Yes, I did pinch that last one off Kinky Boots.)

Heather (Chloe Young) starts off as a heavenly creature who apparently enjoys bouncing on clouds in her spare time. She is under the control of Zeus (Grace Church), and theirs is a bizarre relationship. I might be either missing the point or being overanalytical, or both, but this version of Zeus doesn’t seem to have that much power over his subordinates. Or at least, for whatever reason, he chooses not to exercise it to its full extent, relying on tempting and enticing words reminiscent of the Adam and Eve forbidden fruit story to retain Heather within his domain.

Harry (also Church, making for some comical costume changes when the show is at its most confrontational, in a supernatural showdown – as peculiar as it sounds) encounters Heather in rainy London, after the (sort of) angel is chucked out of the sky when Zeus chucks his proverbial toys out of the pram. Heather’s observant description of how humans live is a little like the wizards of the Harry Potter series attempting to understand the ways of ‘Muggles’, or even Prince Harry in Mike Bartlett’s King Charles III, effusive in his recounting of a night out with a commoner: “We went to Sainsbury’s!”

For a while, the audience watches the pair indulging in people watching as they travel around the city, observing the beaming face of a proud parent or the miserable atmosphere of a journey on the London Underground. I borrow another line from a different show, this time The Retreat, by Sam Bain, which enjoyed a run in 2017 at the Park Theatre. One brother asks another whether he sees people in a happy state when they are on the Tube. “No,” comes the immediate retort, “because they’re on a f*cking Tube!”

Context notwithstanding, there’s something to be said about life being whatever people make of it. It’s difficult not to notice, in one’s own travels in and around the capital, how many people derive pleasure out of listening to music on the go. Music plays a significant part of this production too, and if religion of the ancient Greek variety seemed a little ethereal, the snippets of chart music tunes performed by Claire Parry furnish the audience with an accompanying sense of familiarity.

This is a show that considers itself still in development, so a questionnaire is provided for the audience to leave its feedback. One of the questions made me smile, “Was there anything you didn’t understand?”. It is sometimes irritating for a question to be answered with another question, but I take the risk here: given that the show is about love, is love still love if it is fully understood? As for how the story ends, let’s just say the show isn’t called Heather and Harry for nothing. This celebration of the human touch is a short, sweet and sincere production.

Combining clowning, cabaret, theatre and an array of dance styles Heather and Harry is an extremely silly unpicking of what it means to be human… and in Love.

Heather is cast from heaven by her gangster rapper husband Zeus. Finding herself in the midst of Londinian mayhem she seeks solace in the lonely cockney philosopher Harry. Harry shows Heather proof of beauty and love amongst the chaos.

Stumble Trip -the newest theatre company to be produced by the Jacques Lecoq School – will take you on a journey with just some sequins and impressive fake beards.