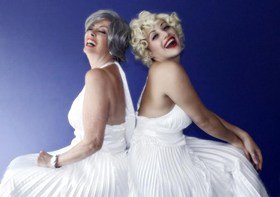 On August 5th 1962 at 12305 Fifth Helena Drive, Brentwood California, at the age of 36 Marilyn Monroe died. She may have committed suicide, she may have been murdered by anyone from the CIA – acting on the orders of the Kennedys – to the mafia or she may have taken an accidental overdose. These theories don’t really matter as the one irrefutable fact is that she died. Or did she? Welcome to Dylon Costello’s Hello Norma Jeane at Park Theatre.

In a seedy Hollywood motel room sits an elderly lady (Vicki Michelle). She is singing and talking to the ashes of her dead husband and seems to be pretty much enjoying saying goodbye to him and telling him who she really is for
even though everyone knows her as Lynnie, from Stockthorpe-on-Sea, Essex, she is in fact Hollywood legend and icon Marilyn Monroe returned to her natural home to tell the world of her exploits. Or is she? Enter grandson Joe (Jamie Hutchins). Joe, confused and upset about his grandmother’s actions but pleased to have found her so far away from home.

Joe has his own problems – involving a cheating and abusive boyfriend – and really could do without his grandmother’s delusions to deal with as well. He is a very confused boy and as he always does in these situations, Joe turns to his invisible friend/conscience (Farrel Hegarty) – who bares more than a passing resemblance to a young and beautiful Marilyn – for help and advice. Lynnie tries to convince Joe of her real identity and the arrival of a CIA agent, Bobby (Peter McPherson), seems to move him to thinking she may be telling the truth. To reinforce her story, Lynnie, sends Joe out to find bits of Marilyn memorabilia from various secret locations.

If you are going to write a story about one of the most famous people in the world, then it is imperative that you come up with a new angle on an old tale and writer Dylan Costello has really pulled out all the stops with Hello Norma Jeane. He could have taken the easy route and written about her life and death but instead opted for this wonderful idea that she faked her own death and moved to Essex for 40 years – an idea so preposterous that, when you stop and think about there is that grain of a possibility it could just be true. It is a credit to the writing that by the end of the second act, I had changed my mind a dozen times as to whether Lynnie was or wasn’t Marilyn. In fact, I have seen the second act twice – and not just because of Peter McPherson’s abs – and come to a different conclusion each time.

Of course this is a massive credit to the cast, particularly Vicki Michelle who moves between Essex grandmother – a figure so familiar to those of us from that region – to Marilyn at her most seductive and paranoid – such as the scene in the second act where she gets confused over who Bobby is. The rest of the cast work so well together throughout the play and the relationship between Jamie Hutchins’ Joe and his grandmother really feels just right. He is really a confused and bewildered young man who wants to believe his grandmother but knows in his head – as pointed out by his Marilyn companion (some wonderful acting from Farrel) that she can’t be Marilyn. Some of the most emotionally charged scenes are between Joe and his grandmother and there are moments of genuine emotion as they talk to each other about things best left unsaid during the second act,

Farrel Hegarty shines in the triple role of Marilyn, Norma Jean and truly horrible TV host Carla Carlyle, with a costume and personality change every time she comes on to help, advise or hinder. I also really liked the character of Bobby with Peter Mcpherson really bringing this unemployed actor – complete with cynical Hollywood attitude – to life. There are a couple of really lovely scenes when Bobby and Joe are together and seem to find that tiny spark that suggests there is potential there for more than just a probably very enjoyable fumble under the bedcovers.

Director Matthew Gould keeps the pace moving beautifully – the first act being faster and funnier than the second – and makes great use of the wonderful set designed by Zoe Hammond, which really does look like a motel room in the seedier side of town. I also really liked the video that was playing as we entered the auditorium, showing images of Marilyn and interviews with people who knew her. My only criticism was that it was difficult to hear the sound with the rest of the audience taking their seats and chatting before curtain up.

Overall then, I really enjoyed Hello Norma Jeane. It is a play with many levels to it. Loyalty, love, the unconditional love of family, self-respect and holding onto one’s beliefs. Each character went through quite a powerful journey over the course of around two hours and, certainly in the case of Joe I think he came out of it so much stronger than when he landed in LA and I left the theatre really wishing him well in his future life, whatever it brings and whoever he is.

Giant Cherry Productions in association with Park Theatre presents
Hello Norma Jeane by Dylan Costello
It’s Spring 2003 and Essex grandmother Lynnie has escaped her nursing home and fled 5000 miles across the Atlantic to Hollywood, Los Angeles, where she plans to reveal to the world her deepest secret – that she is Marilyn Monroe, alive and well after faking her death decades before.

As her gay grandson Joe turns up to take her home, he finds himself embroiled in his grandmother’s scheme, questioning his sanity as he wonders whether he really can be the grandson of Marilyn Monroe.

But is Lynnie really Marilyn? Or just a crazy old lady wanted to avoid ending her days alone inside a nursing home?  There’s only one way that the truth will be revealed in this funny drama that is full of surprises.

The background stays largely the same throughout the performance, and appears to resemble the hairstyle of Elle Woods (Courtney Bowman). Regardless, … END_OF_DOCUMENT_TOKEN_TO_BE_REPLACED

Everyman is one of the earliest printed plays, originally written in Middle English and first performed around 1510. It is a morality play, popular … END_OF_DOCUMENT_TOKEN_TO_BE_REPLACED

After being closed for over two years due to covid, the Arcola Theatre has re-opened with Barney Norris’s love song to the people who raised him, We … END_OF_DOCUMENT_TOKEN_TO_BE_REPLACED

Now in its 15th year, La Clique have firmly established their place on the world burlesque circuit and this year’s London cast bring their infamous … END_OF_DOCUMENT_TOKEN_TO_BE_REPLACED