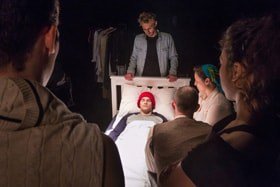 Is a play like Holding The Man still necessary in this day and age? It’s not like the AIDS virus is a great unknown, and we’ve come a long way since the days of that advert on British television in the 1980s – you know the one, with the proclamation, voiced by John Hurt, “There is now a danger that has become a threat to us all,” as though anyone could die of AIDS at any point for any number of possible reasons.

But there’s a certain universalism in what is, at the end of the day, a heartfelt love story, and a true one at that: there really was a man in Australia called Timothy Conigrave (Christopher Hunter) who really did have a long-term relationship with John Caleo (Paul-Emile Forman). And in any event, it is the sort of production that, 22 years after Conigrave’s passing at the age of 34, is beginning to serve as a historical piece, either reminding or informing its audiences of the struggles, both physical and psychological, faced by HIV/AIDS victims, well within living memory.

There is, perhaps inevitably, a hard-hitting aura in this narrative, albeit one laced with happiness and hilarity, particularly in the early stages of the play, when the central characters are still at school and the love between them is still blossoming. Even at this point, however, they come up against opposition, not only in the playground from classmates who are dismissive of homosexuality, but from Bob (Dickon Farmar), John’s father, who goes so far as to threaten legal action against Tim’s family (whether he could successfully prosecute as far as Australian law stood at the time is not explored in the show, which I thought was a missed opportunity).

Interestingly, the show’s programme dispenses with the usual ‘all other parts are played by members of the company’ line, and almost pedantically lists every character that appears, including one called ‘Door-Bitch’ (I have no idea). Of note is Sam Goodchild’s Marie, who consistently raised hearty laughs from the audience. He plays a she, y’see, and carries it off with such believable poise and mannerisms that it’s a performance, however brief, almost worth the price of a ticket in itself: it certainly added to the play’s engagement factor when it could so easily have subtracted from it.

The awkwardness of both the initial meetups between characters, and the ‘coming out’ later on, was captured so well. The scene changes are relatively slick, and both set and costumes firmly place the production as an Eighties piece of theatre, helped by a script also very much of its time. Back then, (and as I say, it wasn’t that long ago) parents banning the use of the landline telephone was all that was needed to throw teenagers’ plans into complete disarray. How the world has changed – so, so quickly.

The steadily-paced narrative can, on occasion, be downright crude in its fearlessness to discuss, um, personal matters pertaining to down below. Moments of comic relief intersperse the storyline, less frequently during the second half, appropriately enough as the play gets ever darker. in the first half, there’s quite the celebratory atmosphere, emphasised both in the display of the vitality of youth and a convincing enough recreation of a party in a nightclub.

Charged and intense, the intimacy of the play suits the Jack Studio space better than the 380-seater Trafalgar Studio One, where I saw a production of Holding The Man in 2010. The final half hour in particular, was so incredibly absorbing. The palpable chemistry throughout between Tim and John was a pleasure to see, and must have contributed to the emotional response from the audience – audible weeping could be heard as the play drew to a close. Not exactly enjoyable, this is nonetheless a fascinating and compelling production.

Holding The Man
stage adaptation by Tommy Murphy
based on the book by Timothy Conigrave
produced by Big Boots Theatre Company
Australia. Melbourne. 1976.

Tim catches a glimpse of handsome school-mate and captain of the football team, John. Their first kiss is an exciting game. Their 15 years of life together a constant battle against discrimination, separation and temptation, all set against the pivotal events that define the era they live in. But there is an enemy present that no love can conquer.

Holding the Man is a coming-of-age drama about first love and loss, conveyed with warmth and humour in this immersive stage production. It is a true-to-life story about growing up in Melbourne as a young gay man, and the fight for human rights and equality.

This multi-award winning play is adapted from Timothy Conigrave’s memoir, Holding The Man, which was given the 1995 United Nations Human Rights Award for Non-Fiction.

It is 2002 – another Royal Jubilee year, and HRH (Mary Roscoe) is due to open a new Science wing in a 'sink' comprehensive where Dr Derek Jones … END_OF_DOCUMENT_TOKEN_TO_BE_REPLACED

Dr Anna LaRosa (Dr Stefania Licari) has a lot to say. Just as well, as she’s the only one on stage in this medical comedy, which largely draws its … END_OF_DOCUMENT_TOKEN_TO_BE_REPLACED

Nikhil Parmar’s one-man show, originally written as a TV pilot, manages to touch on a wide range of themes from Islamophobia to modern fatherhood with … END_OF_DOCUMENT_TOKEN_TO_BE_REPLACED

Handel’s 1738 opera Serse (or Xerxes) is an exploration of power, love and human frailty. King Serse falls in love with the voice of his brother … END_OF_DOCUMENT_TOKEN_TO_BE_REPLACED

Lea Salonga has her fans. She also has some superfans, the ones who yell, “I love you Lea!” at almost every opportunity. If that wasn’t enough, there … END_OF_DOCUMENT_TOKEN_TO_BE_REPLACED