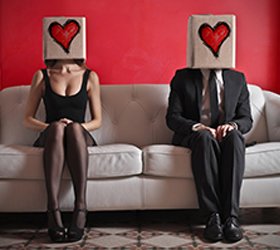 I have never bothered with dating sites, and it is only through shows like I Would Like To Get To Know You that I even have the faintest idea of what it means to ‘swipe right’, or indeed left. There are more definitions in this show, projected onto a large screen, including the acronym ‘IRL’ – in real life – and a hilariously over-emotional definition of ‘ghosting’ read out by Katherine Vince, taking on a character that has clearly been ‘ghosted’: a party in a personal relationship suddenly stops communicating because they no longer wish to continue the said relationship. “Many attempts to justify ghosting as a way to cease dating the ghostee without hurting their feelings, but it, in fact, proves the subject is thinking more of themselves, as ghosting often creates more confusion for the ghostee than if the subject kindly stated how he/she feels.”

The show is divided into six ‘parts’ – Tinder, singlehood, looking, sex, falling and love. Some good use of video projections and audio soundbites throughout the show enhance the spoken word and songs, the latter further supplemented by George Cheetham’s acoustic guitar. There aren’t central characters to speak of, and no beginning to the end of the storyline, linear or not. The short films in the show are not always a stand-and-watch affair for the performers – in one sequence, Vince takes a marker pen and makes a big drawing on the floor of the stage (paper is laid out beforehand), synchronised to the nanosecond with the video behind her.

Nothing in the show wants to make yours truly try out the world of dating apps and websites, not least when the ‘vox pops’ start mentioning how time-consuming online dating is, with the “endless messaging” being “dull as f—k”. As the show is about ‘love, lust and loss’, the sort of single people portrayed are the ones who are simply incomplete without a partner. Not that there aren’t people who are both single and satisfied, but that’s another show for another time.

Something of a revelation to me was the sort of photos (some) people put up on their dating profiles with a view to finding a partner. In a series of images, one young lady had a collection of selfies taken in the same lift, and a man had a similarly-sized collection of pictures with him holding different fish he had caught. I rather liked the observations about how Hollywood motion pictures portray love as being something that happens at first sight across a crowded room.

‘IRL’, so to speak, finding one’s true love is seldom straightforward. There are nine songs in the show, including re-worked covers of ‘I Will Survive’ and ‘Sexual Healing’. The stand-out for me was ‘Why Can’t We All Be The Obamas?’ an observational comedy tune about what the closest example to a perfect marriage looks like. As one of the comedy characters, ‘Dating PA’, puts it, “know your audience”. This show certainly seems to have attracted the sort of people who would appreciate a show of this nature (at the performance I attended, at least) with much to talk about in the bar afterwards. Hearty laughter abounds in this sharp and sophisticated production.

A showcase of real-life dating stories – from the humorous to the downright questionable – tackling everything from Tinder to zombie-ing. Join us as we navigate through the dating minefield, asking how, where and why we are searching for love today.

I Would Like to Get to Know You was developed with the support of Arts Council England, Norfolk County Council, The Garage Theatre – and our willing interviewees.

I Would Like to Get to Know You is the third show developed by Feral Foxy Ladies & Kaleido Film Collective.