The beautiful game. Or not so beautiful perhaps. Score a goal, win a cup, get the car and the house and the girl. Bask in the glory. Drink in the idolatry. Live the dream. But at what price? 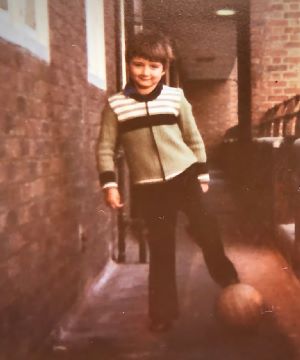 Here, in Idolatry, writer Paul Bridger tells us, in intricate detail, exactly what that price can be. For some boys, some up-and-coming stars, some football desperados who can’t see anything other than the prize of fame, those innocent dreamers who think they can only get it by doing what their coach wants – what their coach demands – it becomes a nightmare, not a dream: on the pitch, on the training ground and, in what should be the safety of their own homes, in their beds.

This is a powerful piece of writing by Bridger, a solo show in which he performs with intimate intensity, with knowing perception, and with articulate recognition. The character he plays is former footballer Glenn Richards and
Bridger convinces us that he’s been there, that he understands, and he gets us to feel the pain, to know the loneliness and, ultimately, to understand and experience the shame.

This is no fiction as recent high-profile cases have demonstrated. Bridger’s research is intricate, his anger is real and his motivation is to show us the truth. And he fully bares his soul. If I may use one football analogy – he leaves it all out there on the stage.

Using a simple set of a goal and a football Bridger recreates the glory and the despair, the passion and the doubt, the highs and the absolute rock bottom. It’s clever writing that creates a compelling narrative with its own engrossing rhythm that builds to a devastating crescendo leaving us hollow and bereft and seething at the end. It’s an emotional audience that leaves the theatre at the curtain: we’ve been prodded and provoked and challenged and rewarded with a theatrical tour de force that informs and gives us real pause for thought. Bridger gets us on a string and he never lets us off.

This is no shouty rant. Bridger uses vocal light and shade well, saving the full force of his articulation for a couple of key moments in the piece. But whether shouting or not the palpable anger is still there hovering under the surface, colouring every phrase, every word with a kind of furious sadness. Occasionally he becomes a little too sotto voce – particularly when lying on the floor – which is probably more to do with using a new space – the lovely Union Theatre has a cavernous feel in its railway arch and the occasional train rumbles overhead – neither of which are conducive to the actor’s art. But these moments don’t distract from what is a confident and compelling performance. And there is humour too. The anecdote about his best mate using sunglasses so that his Mum can’t see his eyes when he’s lying is priceless though we are never far from the simmering tension that underscores this emotive play.

Football, that ‘beautiful’ game is the backdrop to this powerful piece but it goes far deeper than that examining human nature and the worst form of exploitation there can be. It’s a story that needs to be told and I for one am thankful that we have writers like Paul Bridger who are strong enough and brave enough to tell it.

Ask any young lad to describe their first memories of football and most would recall the waft of liniment oil, or the roar of the crowd under the blazing floodlights – Glenn Richards was no different, except he was lucky, he lived his boyhood dream, pulling on the shirt of his beloved Rovers – but at what cost?

Idolatry, the new play by Paul Bridger, reveals the schoolboy innocence of sleepovers and step-overs, to overhead kicks, smashed windows and sunglasses, as we learn how the dark side of football took its hold with unacceptable consequences. Years later those effects would still devastate lives, but it’s a beautiful game… isn’t it?

Based on Bridger’s own personal experience as a youngster (in the photograph) growing up in Stockwell, and inspired by former footballers including Paul Stewart, who spoke out in 2016 about the sexual abuse suffered at the hands of their youth coaches, Idolatry raises awareness that will resonate long after the final whistle.

Think back. Has anyone ever said to you that looks don’t matter, its personality that counts’ Anyone that answered ‘No’ to that skip to the next … END_OF_DOCUMENT_TOKEN_TO_BE_REPLACED

A Streetcar Named Desire might just happen to be on the minds of regular theatregoers in London at the time of writing, on account of the Almeida … END_OF_DOCUMENT_TOKEN_TO_BE_REPLACED

Titus Andronicus is not usually a comedy, it is usually a bloody, villainous and vengeful tale, but tonight it is a comedy and a rather amusing one at … END_OF_DOCUMENT_TOKEN_TO_BE_REPLACED

This show is not without clichés - there are three of note in this production. Firstly, the French horn of the show’s title is personified, speaking … END_OF_DOCUMENT_TOKEN_TO_BE_REPLACED