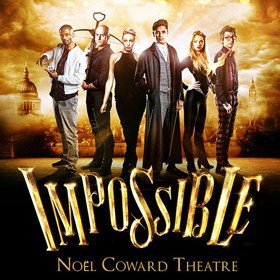 There have been magic shows since the dawn of time. From mystic ritual arcana to cheap fairground entertainment, from thrilling Victorian spectacle to end­of­the­pier sideshow, alternately feared, revered and despised, the magician’s journey has been a bumpy and varied one. Now, we are reliably informed, magic has become “cool” again. Derren Brown, Dynamo, David Blaine; magicians once again command respect, awe – and huge audiences.

And so, last year, magic once again returned to the London stage in the form of Impossible, a multi­faceted, multi­peopled show which promised to bring a breath of fresh air to traditional acts. It delivered to a certain extent; audiences were baffled, shocked and entertained in equal measure. However, it was generally agreed that one aspect remained firmly entrenched in the past – its inherent chauvinism. The enthralling, dynamic performers were exclusively male, while around them lissom, skimpily clad girls smiled winsomely, contorted themselves into boxes and stood bravely while balloons were shot from their heads. To be fair to the producers this was not entirely their fault; their one female act, Katherine Mills, pulled out at the last minute. Nevertheless, the overall impression was one of overweening male complacency. “You long for them to turn the tables and cut a man in two instead,” lamented Claire Allfree in The Telegraph. Well, the producers listened, and in the 2016 incarnation, she gets her wish.

The new Impossible remains true to the original vision of the show; it is a fast-­paced, glittering extravaganza which celebrates the beauty of the classic magic trick whilst at the same time dragging the art relentlessly into the 21st century. And now that there are women involved ­both supremely talented and esteemed artists in their own right – it is truly a show of its time.

Almost every aspect of magic is covered: there is a magician (Ben Hart); an illusionist (Josephine Lee); a Daredevil (Jonathan Goodwin); a street magician (Magical Bones); a conjurer (Sabine Von Diemen); and a very funny mindreader (Chris Cox). To make the production especially family ­friendly, they have also recruited Lance­ Corporal Richard Jones, a magician who won the last series of Britain’s Got Talent and who comes across as exactly the kind of man you would like to take home to meet your grandma.

This is not to say that they have eliminated all aspect of risk and terror from the show; it is chock­full of heart­-stopping moments and jaw­-dropping feats, none of which I will go into here for fear of spoiling the surprise. Suffice it to say that there is fire, water and electricity, there are straitjackets, sharpened nails and crossbows. Spectacle follows grand spectacle; lasers, teeth and sequins glitter, music thunders and smoke billows from the stage in a cloud of wonder.

Strangely, though, the act that most impressed and mystified me was a deceptively simple yet supremely baffling card trick. Quite how it was achieved has been intriguing – and from the post show chatter in the ladies’ loos, the rest of the audience – ever since.

This is the true joy and brilliance of the show; it shows you that although the dazzling special effects, modern technology and general hocus­-pocus can be great fun, they are merely smoke and mirrors for the real magic. This is a show which brings out the wide-eyed child in all of us, and in these days of adult turmoil and anxiety, that is no bad thing.

Impossible, the breath-taking magic spectacular thrilling audiences worldwide, is back by popular demand, returning to its home in the West End for a strictly limited season.

Featuring the world’s greatest illusionists live on stage in a daring, jaw-dropping display of magical artistry Impossible will electrify and amaze theatre-goers of all ages.

Fusing death-defying stunts, technological trickery, grand stage illusions and close-up magic, Impossible reinvents the biggest and best illusions in history in the greatest magic show on earth. This family-friendly live entertainment has to be seen to be believed!

Whatever you do, don’t try this at home!

Booking Until: 27th August 2016
Important Information: Latecomers may not be permitted until a suitable break in the performance. The Producers of Impossible cannot guarantee the appearance of any particular artist, which is always subject to illness and holidays. Performers, times and prices subject to change without prior notice.