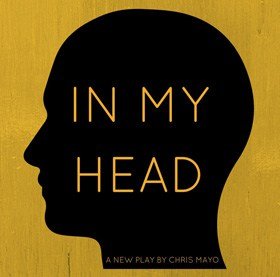 Given the number of characters involved and its relative brevity, it’s a surprise In My Head never feels rushed through. With elements of physical theatre, a sparse set means that visually, more often than not, we could be anywhere, with the script relied on to set time and place. It’s one way, I suppose, of ensuring audiences pay attention.

It doesn’t, however, feel like a single play. While some characters are returned to as the play progresses, some aren’t, which makes this production more of a series of vignettes, all with an overarching theme.

There are shows with large casts and many characters, of course, but here, there’s sometimes a lack of connection between one scene and the next, with different storylines unconnected. Too much time is therefore spent setting up scenes and introducing ever more characters and situations. At least the play does so successfully – every time.

It is, mind you, an effective and efficient way of covering the sheer breadth of what constitutes having a ‘mental health problem’ (as the Mental Health Foundation terms it). The play does not, pointedly, depict the more outwardly obvious forms of mental health problems. Someone does hear voices in their head, but it is (I assume deliberately) unclear whether this is a sign of a mental health problem, or mainly for dramatic effect.

The show’s point about mental health problems being difficult, if not impossible, to identify by looking at someone’s physical appearance, was therefore already well-established by the time a forced and overly long scene set in a television studio came along. Further, there are a few regular theatregoers I know who are getting a little tired of the slow-movement scenes so popular in contemporary theatre. I will only say here that I am (slowly, funnily enough) coming round to their point of view.

This play is rather informative, especially for people like me who have never experienced what it is to use mental health help services. It is hard enough, I should imagine, even having a mental health problem in the first place is not easy, without having to deal with the bureaucracy and hoop-jumping that would frustrate us all. Elsewhere, there are plenty of moments of humour, mostly in the banter between characters; none of the gravity of the issues raised in the play is lost as a result.

Not satisfied with looking at what constitutes a mental health problem, In My Head also looks at a mental health care system in this country that appears to be at breaking-point, and has been for some time. It is quite possible to write a series of plays, each one exploring a different issue relating to mental health. Although this is an interesting and pertinent piece of theatre, there’s not much in the way of character development with some of the many characters in the show: too many are simply forgotten about. A pity, really, as the script in itself is strong and the actors themselves do a decent job with what they’re given.

Still, this is a play that asks more questions than provides answers, and in so doing, leaves plenty of room for post-show discussion. That people are talking about the show must be a good thing; the show certainly achieves its purpose in highlighting a very important but sometimes neglected aspect of community healthcare.

In My Head
by Chris Mayo

“It’s seen as a flaw, a weakness, people don’t understand it, people are scared of what they can’t see.”
A bold, funny, angry, touching and honest portrayal of mental health in the modern world, In My Head is a part verbatim, part fictional exploration of those who struggle, those who help, and those who fail to notice.

Cuckoo Bang are committed to producing fresh and provocative work and creating an accessible platform for the best emerging artists in the country. With their ethos of exploration, limitless creativity and a firm dedication to new writing Cuckoo Bang presents theatre that packs a punch.

This play was first put on at The Mill at Sonning in early 2010 - the world has, of course, changed significantly since then, and the script has been … END_OF_DOCUMENT_TOKEN_TO_BE_REPLACED

It’s easy to see why the Orange Tree has brought this one back for another run, less than a year after its first outing here. This is a bold, … END_OF_DOCUMENT_TOKEN_TO_BE_REPLACED

I always loved Choose Your Own Adventure books. Definitely not the Steve Jackson ones where you had to roll dice (who did that?) to find out whether … END_OF_DOCUMENT_TOKEN_TO_BE_REPLACED

Well, there’s a bit about Pablo Picasso’s (1881-1973) paintings in this show that bears his name. But it’s mostly about his approach towards women. … END_OF_DOCUMENT_TOKEN_TO_BE_REPLACED