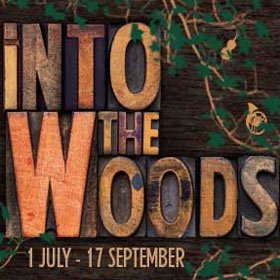 As a child, I sat on my mother’s knee and learned all the great fairy stories. Cinderella, Jack and the Beanstalk, Snow White, you name it, I’ve been told the story and probably seen the pantomime as well. Composer Stephen Sondheim and writer James Lapine obviously spent their own childhoods in such simple pleasures, and then one day, decided to write the fairy story to end all fairy stories, and so Into the Woods was born. It’s a show which has been produced many times and even been turned into a pretty dire movie IMO. However, forgetting all those imposters, a new show is in town as Fiasco Theatre bring their version of Into the Woods at the Menier Chocolate Factory.

In a small town, a baker (Ben Steinfeld) and his wife (Jessie Austrian) are serving Little Red Riding Hood (Emily Young) and lamenting the fact that they do not have a child of their own. As Little Red sets off into the woods to visit her grandmother, the Baker’s next door neighbour, a witch (Vanessa Reseland) comes in and explains that she has cursed the Baker’s house and they will never have children, unless they go into the woods and obtain various items that the witch requires to make a special potion to lift the curse. Elsewhere in the Kingdom, Jack (Patrick Mulryan) and his mother (Liz Hayes) are living in poverty and the only solution seems to be for Jack to sell his cow Milky White (Andy Grotelueschen) for as much money as he can get. Jack is upset as to him the cow is more than a non-milk giving animal but is also his friend, but eventually he accepts he must do it and sets off into the woods to find a purchaser. In yet another location, Cinderella (Claire Karpen) is cleaning while dreaming of going to the festival organised by the Royal Family and meeting the prince (Noah Brody) much to the amused derision of her mother and stepsisters. Very upset at her family’s attitude, Cinderella sets off into the woods to seek solace at her mother’s grave. Now everyone is in the woods, how will fate treat them, will they all get their heart’s desire and who is the mysterious Man (Paul L Coffey) that seems intent on helping everyone he meets as they go into the woods?

Having sat through (and fallen asleep twice during) the movie version of Into the Woods, I was apprehensive but this was not going to be that good. The first thing that strikes you as you enter the Menier’s auditorium is Derek McLane’s beautiful set which is absolutely stunning. There is so much to see on and around the stage that I’m glad I took my seat early so I could get a good look at everything. My thinking was that if the set was this good then the show must be pretty awesome and I was right.

Into the Woods is a really good fun musical. The story itself is slightly convoluted which is not surprising considering the number of characters and their own stories that are interwoven together and this means that it is probably the epitome of ensemble productions. All ten actors/instrument players along with Pianist Evan Rees really throw themselves into delivering a fantastic production that shows off music and lyrics and explains why Sondheim is considered a master of musical theatre.

Directors Noah Brody and Ben Steinfeld have paired the show back so there is little that is superfluous. The cast are on stage virtually all the time and costumes, by Whitney Locher, are simple but effective and at times – such as those worn to illustrate Cinderella’s sisters, extremely innovative. The simplicity of the production really highlights the skill and professionalism of the cast who are extremely energetic and really seem to be enjoying not only the show but also each other’s company on the stage. My one criticism of the production is that I would have prefered a more traditional theatre band/orchestra, particularly in the second act where some of the songs would really benefit from a string section adding to the haunting melodies. Being an ensemble piece it is difficult to praise anyone in particular as every actor gets their opportunity to shine and makes the most of it. If I had to name a favourite then it would be Andy Groteleuschen’s Milky White – that boy can really pull off an impressive cow performance.

Finally then, I have to say I thoroughly enjoyed Into the Woods. It is fun and exciting and gives adults a chance to enjoy themselves in a child-like way that would not be acceptable anywhere else. This particular production is extremely well devised and presented and the only advice I would give is to forget anything you may have seen before and get yourself a ticket booked for Into the Woods as soon as you can.

INTO THE WOODS with Music and Lyrics by Stephen Sondheim and Book by James Lapine at Menier Chocolate Factory from 1st July to 17th September 2016.

Following great critical success in New York, innovative and ground breaking theatre company Fiasco bring their enchanting reinvention of Stephen Sondheim and James Lapine’s masterpiece Into The Woods to the Chocolate Factory this Summer. The production opens on 12 July, with previews from 1 July, and runs until 17 September 2016.

Using ten actors, multiple musical instruments and boundless imagination, this fairytale classic is reimagined as never before. This production, which received the 2015 Lucille Lortel Award for Best Revival, will include the original US cast.

This production is presented in association with Michael Harrison Entertainment and David Ian Productions.

I have seen some outstanding acting recently at the intimate Finborough Theatre, and this new play is no exception. The highly talented cast quickly … END_OF_DOCUMENT_TOKEN_TO_BE_REPLACED

In the pandemic (remember that?) I worked in adult social care. My role was to help older people in their own homes with daily tasks - I’d cook meals, … END_OF_DOCUMENT_TOKEN_TO_BE_REPLACED

The world-famous Wilton’s Music Hall and the children’s classic The Wind in the Willows make perfect bedfellows. Piers Torday has written a version … END_OF_DOCUMENT_TOKEN_TO_BE_REPLACED

Some journalists get, as it were, a bad press, though some of them don’t help themselves with some of the things they write and do. This play doesn’t, … END_OF_DOCUMENT_TOKEN_TO_BE_REPLACED

Paul (Lewis Bruniges) and Freddie Metz (Oliver Yellop), who identify as cousins, are so desperate to get out of the German Democratic Republic, … END_OF_DOCUMENT_TOKEN_TO_BE_REPLACED