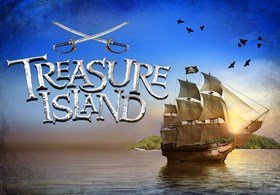 In the show Charlie and Chocolate Factory, there is a wonderful song which really sums up the magic of theatre with the following words “Come with me, and you’ll be in a world of, pure imagination, take a look and you’ll see into your imagination”. I mention this because in the heart of Covent Garden you will find St Paul’s Church which, thanks to to the power of imagination has been magically changed into the world of Robert Louis Stevenson’s novel Treasure Island.

In an old inn, young Jim Hawkins (Harold Addo) dreams of adventure whilst helping his mother run her business. One day, an old sailor by the name of Billy Bones comes to the inn and tells Jim to keep a look out for a one-legged seafaring man. Later, a blind man arrives and frightens Billy so much he pretty much drinks himself to death. Jim and his mother search Billy’s possessions and find a treasure map. The local Squire (Nick Howard-Brown) gets very excited about the prospect of finding the missing treasure so determines to set off and find it. He heads to Bristol to find a boat and crew and promises Jim that he will take him and the local medico, Mrs Livesey (Rebecca Todd) on the voyage with him. The Squire is as good as his word, procures his ship, The Hispaniola, and Captain Smollett (Adrian Quinton) to run it. The Captain is not entirely happy with the crew thinking them a scurvy lot, especially his Bosun Black Dog (Dominic Garfield), Forecastle worker Isabelle Hands (Anne-Marie Piazza) and the affable one-legged cook, Long John Silver (Dafydd Gwyn Howells) who takes an instant liking to Cabin Boy Jim. As the ship sets sail, looking for Skull Island and the buried treasure, Jim is excited to be going on this adventure surrounded by men (and women) of stout heart and brave soul. Oh, if only it were that simple.

I have to say, this production of Treasure Island was a lot of fun. From the bewhiskered chap welcoming us at the gate to the final goodbye from the ushers as I left, I had a thoroughly good time. When you arrive, you become either a pirate or a privateer and which way you go will affect the story to experience. I was a privateer and had a great time with my half of the story. St Paul’s and the churchyard really lend themselves well to promenade theatre and Director Daniel Winder – who also wrote this version – uses the space extremely well, fitting in the ship, stockade and Skull Island itself with great sets by Valentina Turtur. There can be issues with sound, especially when the church bells ring, but on the whole, I was surprised at how quiet and peaceful the churchyard is considering its surrounded by the hustle and bustle of Covent Garden. The story has been pared back a bit so that it is suitable for younger children but without, to borrow the phrase ‘dumbing down too much’ and losing the adults. I have to say that from where I sat, the children looked most excited during the various quite realistic sword fight scenes – nice work by fight director Roger Bartlett who showed no favour towards the ladies and got them into the thick of the action as well as the men.

The cast of seven do a fine job of bringing the story to life, and my personal favourite was old Long John himself, played with a wonderfully over-the-top pirate campness by Dafydd Gwyn Howells. There was a wonderful geniality about his portrayal that made him a hero and a villain who would happily share his grog with you just before stabbing you in the back. Harold Addo’s Jim had the right mix of reticence and wilfully disobedient young scallywag who loves his mum as much as he loves a good adventure.

Without going into too much detail – even if you know the story, there are surprises aplenty in this version – Iris Theatre have put together a really splendid production of one of the classics of children’s literature. At a running time of just over two hours, the time flies by and it comes as a bit of a surprise when the final scene occurs and Long John raises a really great point about morality that had me thinking as I left this lovely show.

All hands on deck!  Get set for the adventure of a lifetime.
Iris Theatre presents a new adaptation of Robert Louis Stevenson’s swash-buckling novel in an outdoor promenade production this summer.

Join the young Jim Hawkins aboard the Hispaniola on a daring voyage across the seven seas. Meet Long John Silver and his madcap crew on the hunt for Captain Flint’s hidden gold, but beware of the Black Spot!
This is an immersive theatre performance where the audience is part of the action.
Perfect for buccaneer boys and pirate lasses aged 8+. Pirate costumes encouraged. Argh!

It is the duty of every citizen to answer the call to support and protect the United Kingdom and its allies so last night, while the rest of the … END_OF_DOCUMENT_TOKEN_TO_BE_REPLACED

Harold Pinter only ever wrote one novel. And, let's be honest, he didn’t rush into this literary endeavour. He started it in 1950 and the book was … END_OF_DOCUMENT_TOKEN_TO_BE_REPLACED

How far would you go for the people you love? What lies would you tell? What sacrifices would you make? That’s the question at the heart of The … END_OF_DOCUMENT_TOKEN_TO_BE_REPLACED

“All political lives, unless they are cut off in midstream at a happy juncture, end in failure, because that is the nature of politics and of human … END_OF_DOCUMENT_TOKEN_TO_BE_REPLACED