The hyperbole in this varied play provides the audience with something to think about – I was intrigued by an early idea of a shadow having a shadow itself, for instance. It’s the sort of thing that would come somewhat naturally to Derek Jarman (1942-1994) (Mark Farrelly), being a stage designer and film director. This isn’t, of course, the first time Jarman’s life and career have been highlighted – in 2021, for instance, a documentary commissioned by The Guardian called Saintmaking: Derek Jarman and the Sisters of Perpetual Indulgence, is about Jarman’s canonisation by an “Order of queer and trans nuns”, as the Sisters of Perpetual Indulgence call themselves. 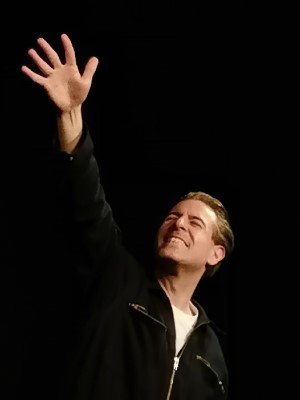 But this is the first time I’ve come across a stage show about Jarman, and no prior knowledge is required – the story goes as far back as his schooldays. He knew then that he was homosexual, and found “millennia of Christian hatred” exhibiting itself through the moral strictures of what constituted school discipline at the time. His time at University College London’s Slade School of Fine Art seemed happier, inasmuch as Farrelly’s Jarman saw no reason to be vehemently critical of it.

The dreaded term ‘audience participation’ is a part of proceedings, though here it is quite harmless, so long as the old maxim about sitting in the front row at one’s own risk is observed (an earlier draft of this review provided further clarification on this point, but in the end, I took it out as it was giving too much away). While Jarman was a ‘gay rights activist’, according to the English Heritage blue plaque at Butler’s Wharf in London, the play channels his opinions through portrayals of his film directing as well as more personal scenes. It’s a better approach than lecturing about Section 28 and AIDS awareness.

Farrelly’s performance gets quite physical when it wants to, and in line with plays such as Holding The Man and Angels in America, dying of AIDS is a drawn-out and harrowing process. Given the relative hedonism and borderline party-like atmosphere Farrelly generates, complete with flashing lights and vivid descriptions of events that left little, if anything, to the imagination, it was evident the good times were going to end at some point. The predictableness of the narrative arc, however, doesn’t stop the final scenes from having a significant emotional impact.

It comes across as an honest life story – I do not have the inclination to fact-check everything asserted in the show, and it wouldn’t surprise me if dramatic license was deployed. But this is not, either way, a sugar-coated account, and Jarman doesn’t immediately seek to apportion blame to others the instant something doesn’t quite work out in his favour. Farrelly makes good use of the available performance space – and beyond, repeatedly breaching the fourth wall, as though the show were a coffee shop conversation amongst friends, providing added rapport to what is already an intimate venue.

It is difficult, then, not to pay attention to such an engaging performance about someone who relished challenging conventions. The production itself is far from ordinary, and is best enjoyed by patrons looking for something different and incomparable.

Derek Jarman: film-maker, painter, gardener at Prospect Cottage, activist, writer… his influence remains as strong as it was on the day AIDS killed him in 1994. But his story, one of the most extraordinary lives ever lived, has never been told. Until now.

This vibrant new solo play written and performed by Mark Farrelly (Quentin Crisp: Naked Hope, Howerd’s End ) brings Derek back into being for a passionate, daring reminder of the courage it takes to truly live while you’re alive.
A journey from Dungeness to deepest, brightest Soho and into the heart of one of our most iconoclastic artists.

Everyman is one of the earliest printed plays, originally written in Middle English and first performed around 1510. It is a morality play, popular … END_OF_DOCUMENT_TOKEN_TO_BE_REPLACED

After being closed for over two years due to covid, the Arcola Theatre has re-opened with Barney Norris’s love song to the people who raised him, We … END_OF_DOCUMENT_TOKEN_TO_BE_REPLACED

Now in its 15th year, La Clique have firmly established their place on the world burlesque circuit and this year’s London cast bring their infamous … END_OF_DOCUMENT_TOKEN_TO_BE_REPLACED

Warm, funny and lacerating, Satinder Kaur Chohan’s new play opens with a fly-on-the-wall look at the daily attempts women make to be accepted and … END_OF_DOCUMENT_TOKEN_TO_BE_REPLACED