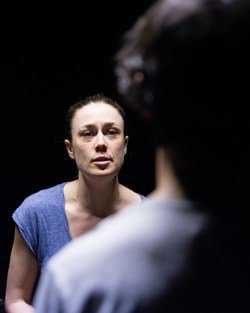 The creative team behind the explosive Sid the Play certainly don’t do things by halves, and Kicked in the Sh*tter takes a similar approach in its sheer intensity. A short play, not a minute longer than it needs to be, there is, perhaps mercifully, no thrashing around of the set this time around (the producers of Sid the Play were left with a repair bill after one of the walls of the Above the Arts Theatre sustained damage during a particularly explosive performance). Despite the infinitely subtler approach here – the play’s title is a metaphor, y’see – this production is no less impassioned.

Him (James Clay) and Her (Helen Budge) are siblings. The play flits between school days and adulthood and back again, making proceedings unnecessarily complicated in a narrative already packed to the rafters with a number of issues and themes affecting their lives. Given the realistic storyline, the set is comparatively absurdist – if such a thing is possible – just a few boxes and other props to depict anything from outdoors to the local Jobcentre Plus.

From time to time I will hear about someone on benefits who lives in the vicinity of others who hold down full-time jobs, and the lifestyle sustained by the benefit recipients makes my employed friends and acquaintances wonder whether it really does pay to work. Here, Her (I do wish this play could at least have dignified their characters with proper names, though I understand the point about being invisible to those with influence and society at large) is genuinely unable to make ends meet – and no, she’s not one of those people with designer clothes, a convertible car and stables for a collection of horses.

I’ve come across stories like Her’s before, but this is on another level. I’ve read middle-class woes of those who find themselves sandwiched between supporting their children through their school years and then on through university, whilst having to oversee the care of their elderly and frail parents. This leaves them without the funds for a cruise or safari holiday. I would love for these people to sit through a performance of Kicked in the Sh*tter and consider what it is to be Her, on the breadline (if not below it), choosing between ‘heat’ and ‘eat’ despite not having a gambling, drug or alcohol habit to satisfy.

They are worried about how much more expensive trips abroad are during school holidays. Her is worried about whether she must send her children to school the next day hungry. With Him, there are mental health concerns and anxieties that prevent him not only from paid employment but from functioning as a person, and Clay’s performance puts across an ‘I wish I could change but I just can’t’ perspective with considerable conviction. There are digs in the play at the social security system, more specifically at the benefits ‘sanctions’ brought in by the previous Work and Pensions Secretary, Iain Duncan Smith, applied rigorously as a tick-box exercise and without much consideration for extenuating circumstances.

But if it’s a Tory-bashing bonanza you’re after, the show will disappoint. This isn’t a production that seeks to apportion blame, but rather to supply food for thought. A powerful and poignant play.

Depression. Sanctions. Anxiety. Self-harm. Back to work. Substance Abuse.
JSA. AA. ESA. FA. PIP. It’s grim out there. It’s grim everywhere.
Sibling love and sibling dependency; Kicked in the Sh*tter is a tale of brother and sister struggling to live with mental health difficulties amidst the labyrinthine wreckage of a decayed welfare state.

Leon Fleming’s new play is a story of struggle and hope for those who fall through the cracks today and every day.
Kicked in the Sh*tter is co-commissioned by Theatre in the Mill, Bradford and comes from the team that created the ★★★★★, award nominated West End hit Sid.