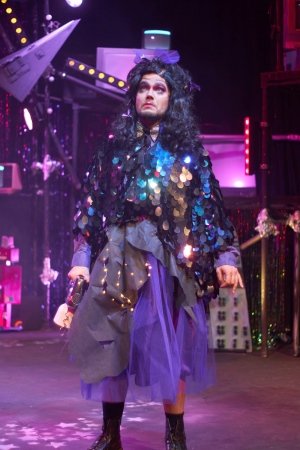 Teddington Theatre Club’s pantomimes are always a seasonal highlight and King Arthur in Space is no exception. Doing away with anything as superfluous as a plot, and subverting almost all of the “rules”, the writer Loz Keal has produced a script that includes aliens and space weaponry, interplanetary travel and a gender-shifting villain straight out of Dr Who.

The large almost entirely female cast is hard-working with particular highlights being a well-drilled rendition of Tom Sutton’s panto favourite ‘Jobs’ and a very entertaining ‘Behind you’ routine. While it always seems wrong to single out anyone in of a production such as this, some warrant special praise. While the part is under-written, Scott Tilley is a suitably heroic Arthur King (see what they did there) and, as a very modern heroine, Jessica Hunt sings superbly while her alien sidekicks, Kelly-Marie Tuthill and an endearingly sweet Naomi Pink are enchanting. But, as always, the villain has the best lines and Danielle Thompson is very funny as one half of the evil Mrs Morgan, supported by her useless henchmen, brought to life by Anna Strain and panto veteran Dave Dadswell.

Choreographed by Tuthill and Syreeta James, the ensemble dance very well and – mostly – sing well too, with outstanding contributions from Patrick Troughton (channelling the Duracell bunny) and Anna Maria Christopher as a marvellously louche Rapunzel who is clearly no stranger to letting her hair down. Directed briskly by Marc Batten and with superb costumes and a wonderfully busy set, this is a lively and exciting production that will have you cheering by the final curtain.

In a galaxy that isn’t very far away…
Join us for TTC’s annual pantomime – cheer the clean-cut Arthur and space vixen Gwen, boo the evil and greedy Mrs Morgan and her comedy henchmen as we re-imagine the Arthurian legend with added robots, aliens and Merlin, the talking computer.

All the pantomime conventions you’d expect including bad jokes, plenty of audience participation and a few surprises!

The thing about Panto is not to over-think it. It’s about having fun and surrendering to the Christmas spirit. Like Christmas crackers, there is a … END_OF_DOCUMENT_TOKEN_TO_BE_REPLACED

Anyone who's worked in investment banking knows it's largely an intellectually-free zone, polluted with people who calculate each other's value … END_OF_DOCUMENT_TOKEN_TO_BE_REPLACED

By the production’s own admission, the version of events as detailed in Bonny & Read is unlikely to equate to an exactly full and fair account of … END_OF_DOCUMENT_TOKEN_TO_BE_REPLACED

This early Rattigan play has had an interesting life. Set in the Second World War and premiered while that conflict still raged, it has since found … END_OF_DOCUMENT_TOKEN_TO_BE_REPLACED