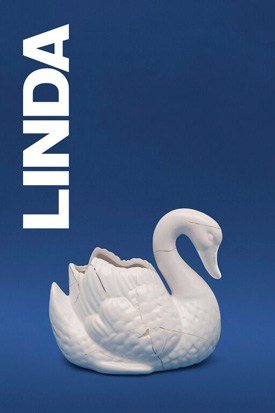 There has been a lot of discussion in the press recently about what happens to the lives of women as they get older. This is particularly true of ladies that work in the media and suddenly seem to disappear off our screens as soon as they turn 50. What is needed is a good way of raising this issue and bringing it to the attention of the general public. Luckily, playwright Penelope Skinner has done just that in her new play Linda currently running at the Royal Court.

Linda (Noma Dumezweni) is Senior Brand Manager for Swan Beauty Products. She is fifty five and has been in the job for a long time – possibly too long – and although she once won awards for her campaign “True Beauty – Changing the world one girl at time”. Unfortunately, her latest pitch, aimed at appealing to ladies of a certain age is not going down well with her 60-year-old boss Dave (Ian Redford) and he along with the Board have decided that their advertising needs revamping. To that end, they have head-hunted 25-year-old Amy (Amy Beth Hayes) – hungry for promotion and the perfect life – to join the team. Linda not surprisingly resents the input of the young whippersnapper but can at least find some solace with her temp Luke (Jaz Deol) – who has an ulterior motive to everything he does – as she engages in harmless flirting with the handsome thirty year old.

At home, Linda, on paper at least, has a perfect home life. Living in a wonderful, modern apartment with Husband Neil (Dominic Mafham), a 54-year-old schoolteacher and band member who, is often distracted by his work with 28-year-old singer Stevie. Neil is, obviously devoted to his wife and their two children, even if he doesn’t always show it. There is Alice (Karla Crome) 25 and refusing to take off her skunk onesie and fifteen year old Bridget (Imogen Byron) a wannabee stage school child appalled at the lack of good female parts and who produced the most amazing summation of Hamlet.

Linda’s life starts to fall apart with the arrival of Amy, which is closely followed by changes at home and, as a storm gathers outside of the office, and truths hit home inside, Linda is confronted by the reality of her life and what it really means to be a woman of a certain age.

Before anything else, I really want to compliment the amazing set by Es Devlin which is absolutely stunning and really catches the eye the moment you enter the auditorium, and is amazingly flexible as it turns around bringing the various locations of Linda’s life into focus. Now, let’s talk about Linda. Much has been written about the fact that Noma Dumezweni took over the role only a few days before the opening. And I for one have got so much admiration for her in doing this. Linda is an amazingly complicated woman to play and is the lynchpin of the entire show. Noma does a superb job of bringing her to life and making her a real person with real problems as she moves through the show. There are some truly wonderful moments when Linda is alone, talking passionately to the audience about what she believes in and why, that are really moving to watch and Noma delivers them brilliantly. However, this isn’t a one-woman show and the rest of the cast also produce first rate performances throughout the play. This is due both to the quality of their acting and also the excellent and sensitive directing of Michael Longhurst.

I suppose if I have a criticism, then it’s that Penelope Skinner has maybe tried to put too much into the narrative. Although the play is ostensibly about Linda every character is having some form of problem to contend with and while this does reflect real life, I did find, particularly in the case of Linda’s daughter Alice, that it was a bit of an unnecessary distraction – although I have to say it was a great example of how things that happen during childhood can be with you for a very very long time.

However, that minor point aside, I did think that Linda was a really good story that perfectly shone a massive light not only on the problems encountered by ladies – and I have to say gay men – when they hit a certain age but also the way in which society can make them feel like they are invisible all of a sudden. It is not some feminist rant and although it might make uncomfortable viewing for some men, it is definitely a play that is relevant to them as much as to a female audience.

Linda is a thoroughly great production. Excellent writing, brilliantly staged and superbly performed I can see it being the next big, and very welcome, transfer from the Royal Court to the West End.

I’m an award-winning business woman. I’m happily married with two beautiful daughters and I still fit in the same size ten dress suit I did fifteen years ago. What could possibly threaten me?”

Linda Wilde has dedicated her life to changing the world. She’s won awards for her efforts, at the same time as working hard to become an inspiring mother, and an independent, loving wife.

Now, at 55, she seems to have it all. But Linda isn’t satisfied. She’s a woman in her prime and she’s embarking on her most ambitious plan to date. But beneath the surface, the cracks are starting to show.

“Old for a woman means worthless. Invisible. Of course we’re terrified. You tell us we peak at sixteen and it’s downhill all the way from there. Well I haven’t worked this hard to be pushed aside at the last hurdle. I refuse to be silenced. I will not disappear. I am Linda Wilde. And I’m still here!”

People are like swans. Hopefully, that’s got your attention and while you may be questioning my statement, it is true.  We all have a surface that we … END_OF_DOCUMENT_TOKEN_TO_BE_REPLACED

In case anyone in the audience didn’t know what a toilet looks like, a neon sign reading ‘Toilets’ hangs in between, well, two toilets. There probably … END_OF_DOCUMENT_TOKEN_TO_BE_REPLACED

Dolly Parton’s musical 9 to 5 sets out to do one thing: ENTERTAIN, and it does this superbly. The show has just started an extended tour at Wimbledon … END_OF_DOCUMENT_TOKEN_TO_BE_REPLACED

I feel so comfortable here in this large airy Church, seating is socially distanced and face mask compliance is at a level that some large West End … END_OF_DOCUMENT_TOKEN_TO_BE_REPLACED