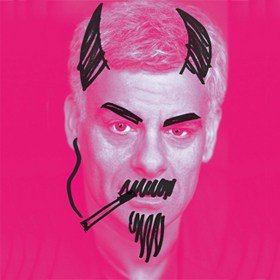 Actors can be a pretty interesting bunch. It is the nature of their profession – moving from town to town, playing different parts at different venues with different actors – that when it comes to telling tales of their lives, they are more often than not more interesting than old Joe Soap in his 9-5. And this is certainly true when you spend an evening with Mark Lockyer and his one man show Living With the Lights On which I saw recently at London’s Young Vic Theatre.

Getting into the theatre is an interesting experience in itself as Mark is at the door shaking hands with each member of the audience and offering them a cup of tea. Now, this raised warning signs in my head and I had this awful feeling that I was in for an hour’s worth of reminiscences of when Mark met and worked with dear Larry, Johnny and the rest. I could not have been more wrong.

Instead, over the course of production, Mark tells a story without a beginning and really and truly without an end but which covers the time in 1995 when he was playing Mercutio at the Royal Shakespeare Company. The story, which I’m not going to go into here, is intensely personal and totally riveting from the moment Mark started until the end. Mark has an amazing voice and stage presence and really brought every aspect of the tale he was telling to life so that, even in the more bizarre moments, it was easy for me to build a picture in my own mind to accompany the narration.

Ramin Gray is listed as Director and I didn’t initially realise there was one as Mark’s movements seemed so natural, wandering around the ‘stage’ area, making sure that he engaged with the audience – in front and at his side – and left nobody out. And it really worked. I was fascinated by his story and wanted to hear more, especially if he still sees Beez and how he has moved from the events of 1995 to talking about his story at a sold-out venue full of strangers – something that would give me a case of the screaming heeby jeebys.

All in all then Living With the Lights On is a fascinating evening giving a deep and powerful insight into the life of Mark Lockyer and the battles he has been through to get to where he is now. I travelled the entire journey with him and by the end I wanted to do two things. Firstly give him a massive hug and thank him for sharing his story and secondly, thank him from the bottom of my heart for introducing the awesome phrase “had a celebratory fumble” to my vocabulary. An amazing story told by an amazing man and I would heartily recommend it to anyone.

Actors Touring Company
Presents
LIVING WITH THE LIGHTS ON
Written and performed by
MARK LOCKYER
Directed by
RAMIN GRAY
Meet Mark.
The thing is I’ve got myself into a bit of a mess…
Mark’s an actor.
I keep forgetting my lines. I’ve left my girlfriend and I’m beginning to stink.
Mark was an actor.
And to make matters worse I’ve met the Devil.

I have spent much of the last thirteen months of Lockdown (it seems a great deal longer!) in trying to avoid ZOOM meetings, but Dr Will Houstoun’s The … END_OF_DOCUMENT_TOKEN_TO_BE_REPLACED

Diplomacy is better than brute force, though in Ali Stroker’s case it wasn’t so much consultation and dialogue that secured her roles across film, … END_OF_DOCUMENT_TOKEN_TO_BE_REPLACED

This was like an eighty-minute meeting that could have been an email. The only worthy bit of narrative was a few sentences, printed white text on a … END_OF_DOCUMENT_TOKEN_TO_BE_REPLACED

I do wonder whether the German accent was strictly necessary. Elizabeth (Alison Reid), or Lizzie, as she was invariably called, is excited at the news … END_OF_DOCUMENT_TOKEN_TO_BE_REPLACED