Home » Theatre News » Liz Miele: Mind over Melee at the Museum of Comedy 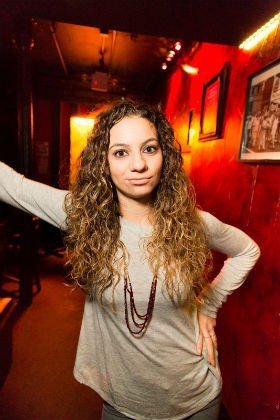 Tucked back from the footpaths of Bloomsbury, the Museum of Comedy’s tiny underground performance area lit up with Liz Miele’s brand of relatable yet hard edged comedy, a preview ahead of her visit to the Edinburgh Fringe.

I have to confess: a more sympathetic reviewer probably couldn’t be found – as a small, Gen-Y of Italian descent, I identified strongly with Miele’s experiences, her feistiness very familiar. With her angry-New- Yorker charm in full swing, Miele talks on sex, feminism, dating, family, health, culture and cats, the balance between awkward and funny skilfully handled and not a single moment wasted. As a relative newbie to a big city, honest stories about her transport rage definitely hit close to home.

Likewise, stories of her travels across Europe as a comedian hit all the right notes, and her observations on life as a young woman just trying to make sense of it all cannot fail to ring true for anyone who has ever experienced confusion about adult life. A dark family history and health problems pepper the otherwise tough, confident observations, giving Miele a depth and versatility which is compelling. Her stories come from a specific, personal place, but don’t be fooled: Miele speaks to the heart of issues that are universal and timeless.

She is small but packs a punch. Her performance is poised and despite her youth, you can feel the power of her capability and commitment to the craft of comedy – something she’s dedicated herself to from the tender age of 14. The drive is infectious. She is smart and direct, her anxieties and achievements laid bare with the best kind of self-awareness.

Miele is one to keep an eye on; her performance is charming, and most importantly of all, tremendously funny. This is my favourite kind of no-bullshit comedy, delivered by a very talented and charming performer. I left the show not only wanting to hear more of her unique view of the world, but with a definite new girlcrush – she’s relatable, real and very ‘now’.

Liz Miele’s hour stand-up show, “Mind Over Melee,” is about her experiences traveling through life and Europe as an anxiety ridden American. She jokes about her struggles with her physical health, mental illness in her family, dating, traveling through Europe alone, and coming to grips with getting older and being an adult, all with a skewed logic of an angry New Yorker trying to make sense of it all.

DEBUT – mentored by George Carlin, versatile and outspoken US comedian Liz Miele is known for her forthright routines, not least ‘feminist sex positions’, a huge viral hit. Liz has also enjoyed great success with her first album, Emotionally Exhausting. After foraying to the UK for club sets, Edinburgh 2016 marks her solo hour debut.

It is the duty of every citizen to answer the call to support and protect the United Kingdom and its allies so last night, while the rest of the … END_OF_DOCUMENT_TOKEN_TO_BE_REPLACED

Harold Pinter only ever wrote one novel. And, let's be honest, he didn’t rush into this literary endeavour. He started it in 1950 and the book was … END_OF_DOCUMENT_TOKEN_TO_BE_REPLACED

How far would you go for the people you love? What lies would you tell? What sacrifices would you make? That’s the question at the heart of The … END_OF_DOCUMENT_TOKEN_TO_BE_REPLACED

“All political lives, unless they are cut off in midstream at a happy juncture, end in failure, because that is the nature of politics and of human … END_OF_DOCUMENT_TOKEN_TO_BE_REPLACED