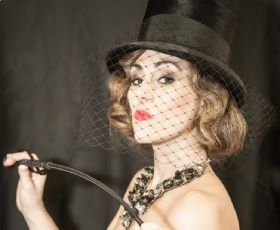 Where is satire? Alive and kicking in the shape of the uniquely talented Melinda Hughes. Melinda writes, acts and sings her own material. Her latest venture is a show recreating the Berlin cabaret era of the late 1920s until the Nazis came to power on the 30th January 1933. I saw the show last night at JW3 in Finchley which gave added poignancy to the evening as it centres around the life of Margo Lion and her Jewish lover the lyricist Marcellus Schiffer.

Melinda writes, acts and sings, her own material accompanied by the pianist Jeremy Limb and the Robert Rickenberg on Double Bass. The set features a chaise lounge and Margo’s effects, shoes, knickers, handbag, purse, jewellery box, champagne and glasses from the night before. Margo enters in a nightie and like all anxious performers turns straight to the reviews. She is delighted and calls Marlene Dietrich to share the good news. They agree to meet for lunch at two, but on second thoughts Margo says “can we make that three my heads spinning“. And with this dialogue, Melinda has set up the pattern for the rest of the show. A few minutes of acting and narration followed by a song which develops those thoughts and feelings. Her first number is ‘Here In Berlin’ which adapts a Kurt Weill song of 1928 of the same title. Melinda moves effortlessly from German to English. She sings it first in German and then in English, the effect is electrifying as one appreciates the same lyrics in two languages. She recreates the Berlin of 1928 before our eyes and one gets as close as one ever will to the feeling and atmosphere of those times. She starts slow ‘Paris is Passé’, her puns and alliterations are clever witty and amusing, and then shifts gear as she celebrates Berlin for its openness to ‘Gays, Russian Jews, Jewish Gays’ and its vibrancy which means you can be what you want to be, “… have no fear and be queer in Berlin“.

Melinda’s vocal and acting range is astonishing, she can go from a vulnerable drug addict on the verge of suicide in ‘Monotonous Night’ with its repetition of the haunting line “And I wish I were dead and I wish I were dead” to a militantly marching martial feminist in ‘Chuck all the men out of the Reichstag’. The bilingual switching from German to English is especially effective in this song as we feel the power of the German language come through in Melinda’s voice. She marvellously captures the topsy-turvy nature of Weimar Germany in the way she switches psychologically from the manic energy of ‘Life’s A Swindle’ to the lassitude of ‘I am a Vamp’. Everyone knows about the inflation of those Weimar years but Melinda/Margo brings it home to when she takes out 3,000 marks from her purse and considers giving it to the beggar outside her window. Thinking better of it she hides the money in her chaise lounge. Her dilemma caught between empathy and personal fear for the future exactly parallels the impossible position of Weimar Germany crushed underneath the perfect storm of unemployment, inflation and political extremes of left and right. The middle ground was overwhelmed much as Margo and Marcellus were on the opening night when the Brownshirts stormed the premiere of Hundert Meter Gluck. Margo stands helplessly asking why no one is calling the police. This moment of the impotent helplessness of the artist in the face of the mob powerfully encapsulates the tragic nature of both the Weimar Regime and the Avant-Garde in 1930s Berlin.

Melinda appropriately ends the evening on a sombre note with her haunting rendition of ‘Illusions’ originally written for Marlene Dietrich in the 1948 film A Foreign Affair. Margo in her love for Marcellus was “… in love with pain”, and as for Weimar Germany it was pursuing “lovely illusions reaching high but ultimately built on sand, and so they just wouldn’t come true, and they all fell apart as dreams so often do”. With this show, Melinda Hughes has recreated anew for us a perennially fascinating moment in political, musical and social history that was the Weimar Republic from 1919 to 1933. Christopher Isherwood in his iconic novel Goodbye to Berlin( 1939) laid the basis for the musical Cabaret 1972 and now Melinda Hughes has added a new dimension to this great tradition in her witty, entertaining and profoundly moving show about the life of Margo Lion. Melinda is the living embodiment of a supremely important and much needed satirical tradition from Berlin in the 1920s to That was the Week That Was in the 60s to Spitting Image in the 1980s, from the sketches of Harry Enfield and Paul Whitehouse to Have I Got News For You and The Mash Report. She is a national treasure in the true sense of that term. An important voice that needs to be heard. Chuck all the men out of your diary and book a space for Melinda Hughes.

Margo Lion, celebrated Weimar cabaret star and lover of Marlene Dietrich was gripped by the decadence and debauchery of 1920’s Berlin. Married to the leading lyricist of the day, Marcellus Schiffer, she performed at the famous music hall Shall und Rauch, but theirs was a tempestuous relationship, fuelled by alcohol, cocaine and jealousy.

Margo brings to life the famous cabaret songs of the day against a backdrop of highly charged sexual fever, political unrest and the rise of Fascism, while marking the fact that 2018 is the 100-year anniversary of the Weimar Republic being formed.

Performed by Melinda Hughes and directed by Sarah Sigal.

Reviewed at JW3 in Finchley Road.

It’s a show of its time. Well, it isn’t really – it’s a show first produced in the 1950s, with this production placing the action in 1913. The set … END_OF_DOCUMENT_TOKEN_TO_BE_REPLACED

The whole narrative in Lift is almost totally implausible, at least to me, until the penny dropped about two-thirds of the way through. The central … END_OF_DOCUMENT_TOKEN_TO_BE_REPLACED

“Three Decembers is the finest modern opera that I have seen.” So wrote Chicago reviewer Tom Williams, having seen its premiere in 2008, and I can do … END_OF_DOCUMENT_TOKEN_TO_BE_REPLACED

There’s a surrealness to Mission that the production’s own script readily acknowledges, with more than one character admitting, separately, that they … END_OF_DOCUMENT_TOKEN_TO_BE_REPLACED

In June 1988, Bob Dylan set off on what has become known as “The Never-Ending Tour” and apart from a break due to the pandemic, it’s still going 34 … END_OF_DOCUMENT_TOKEN_TO_BE_REPLACED