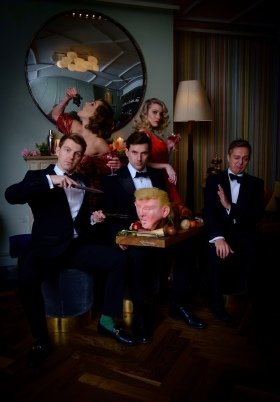 Melinda Hughes is indubitably the most glamorous goddess of comedic cabaret Britain has produced since Millicent Martin and the legendary That Was The Week That Was back in the 1960s. Relevant and irreverent her every pun packs a punch, her satirical surgical strikes take down the pompous, the preposterous and the powerful without fear or favour. She is delightfully playful, devastatingly funny and deliciously entertaining.

Playing to a full house in the appropriately intimate surroundings of the art deco Crazy Coqs, Melinda swept onto to the stage in a dazzling turquoise ball gown and in medias res sang “This Is my opening Song” a piece which satirised the conventions of opening numbers in which one has only 30 seconds to make an impression and capture the audience. This knowingness and undermining of the conventions of show business are just one of Melinda’s many tricks to prick bubbles and point out that the emperor has no clothes. Her topical satire takes in the strained relations between Britain and America in “Britannia waives the rules” (which has the wonderful line “you’ve got lots of Mormons we’ve got lots of morons”) , or the abuse of the online world in “Trolling song”, the addiction to likes in “ Selfie Song” , the sexual appetites of the older woman in “Cougar Song” or the pretensions of the sailing set in “Sailing Song”. Whatever her target she skewers it with the rapier, the scalpel and the dart. Forget Prozac go and see Melinda Hughes. It is laughter as therapy, therapy as laughter.

A classically trained opera singer Melinda’s vocal range is comprehensive. She is equally at home in the high style or rap. She is also a brilliant actor and impressionist. With the aid of a few well-chosen props she can morph from Melania Trump in safari hat to drunk upper-class gal in tiara meeting Prince Harry, or donning a Stetson in “Old Fashioned Guy” she becomes an American middle-aged man bemoaning the Me Too movement as he recalls the good old days “when calling a girl sugar tits just meant hi.” Every routine was convincing. She captures Melania’s central European accent brilliantly in “Melania’s Rap” by emphasising her Vs as in “I push his hand avay, avay”. She hits home with reference to Melania’s surgical tucks as she touches her cheeks and says “I have veelings but I can’t veel them”. But she defies expectations as she goes onto imagine Melania joining the resistance and putting agent orange in his fake tan or a scorpion in his Vig. In ‘Melania’s Lament’ she demonstrates her perfect comic timing. Fantasizing about putting arsenic on his balls, Melinda stops looks knowingly at the audience and says “golf balls”. Melinda’s ability to move back and forth between the cutting remark and the comic aside never going too far down either road is one of her great strengths. She never gets preachy or takes herself too seriously. She is that rare unique performer able to walk a delicate path between the comic and the serious, the satiric and the silly.

Following her sell-out shows last year and five-star reviews at the Edinburgh Fringe, the ‘Princess of Satire’, Melinda Hughes, returns to perform her hilarious songs which lampoon celebrities, politics, the aristocracy and Melania Trump. Backed by a live three-piece jazz trio, her witty, up-to-the-minute show with brand new songs including The Trolling song, Melania’s lament where she phantasies about killing Donald Trump, and Old Fashioned Guy about a sex-pest cowboy. This show is unmissable.