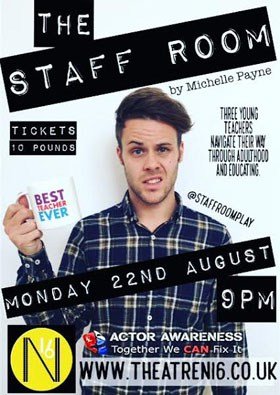 Theatre N16 (Balham) is an integral and vital component of the ever evolving performing arts industry. In an industry where the right name can often be very influential and money can help ease an array of difficulties, Theatre N16 are dedicated to supporting and showcasing new theatre companies, writers and performers. Theatre N16 is exactly what this industry needs and what new talent depend on.

One of their latest productions, The Staff Room, is a brand new one act play by exciting new writer, Michelle Payne. In a short space of time, Payne has been working extremely hard to find her creative voice and put her work out there for people to enjoy and take notice of. This must be admired and applauded. The Staff Room started life as a 15 minute piece, created for a scratch night, hosted by Theatre N16 and Actor Awareness. Having made a massive impact with the audience and the creative team at Theatre N16, The Staff Room has been given a new lease of life and turned into this superb one act play.

I am sure that most of you will agree, as children we all wondered what happened in the staff room at school. What exactly did the teachers talk about? Who did they talk about? I am also sure that most teachers will agree that the staff room is so much more than just a room. It is a sanctuary, a haven, a space void of students, where teachers can just be people for a short space of time. Payne has taken this very notion, in all its simplicity and created a fantastic, insightful and hilarious portrayal of life inside the staff room of a state school.

The Staff Room follows three young teachers as they attempt to navigate their way through the world of education and the added extras that come with being a teacher in 2016. Students, parents, a heavy work load, personal lives and the government, are all highlighted in this one act wonder. Due to the play being shorter in length than usual, the audience are hit with the characters straight away, you are left in no doubt as to who these characters are. The magic of these characters is how they themselves resemble students, their neurotic body obsession, their intrigue with celebrity culture, their social lives, their fears, aspirations and goals. The only difference between them and the students they teach is their age. The stereotypical image of the boring, middle aged, disciplinarian style teacher is nowhere to be seen. Payne introduces the audience to a new generation of young educators, which is much more reflective of the society we live in. Very refreshing indeed.

Alison, played by Hilary Murnane, is the epitome of the wide eyed, newly qualified, fresh and unaffected teacher, determined to change the face of education and make a positive difference to each and every single one of her students lives. Murnane absolutely nails the character, right from the start. She has taken Payne’s writing and has created a memorable character.

Hugo, played by Craig Webb, injects a tremendous amount of energy into this short piece. Webb portrays a character who clearly stumbled into teaching because his degree allowed him to do so. Hugo epitomises the type of teacher that most secondary school students would love to have. Hugo finds everything funny and at times seems to resemble Joey Essex. As a teacher, Hugo is pretty much void of interest and barely knows his own students names. By his own admission, Hugo only became a Geography teacher because he was attracted to many exciting trips he would take the students on.

Ria, played by Faye Derham, is a no nonsense, straight talking P.E teacher. Derham has created a character of wonderful balance, displaying equal measures of sarcasm and dry wit, yet also tender and extremely caring.

The appeal of Payne’s writing is in its beautiful simplicity, razor sharp wit and hilarious observational humour. At times, it’s almost as if the script had been written by a group of people, each bringing their own experiences to the table, rather than just one person. Payne has written three distinct, stand alone characters with their own individual story, which gel together perfectly.

Set in the same staff room, the audience witness the journey these three teachers take over the period of one academic year. The only downside to this superb piece of theatre is that it isn’t longer. Whether she realises it or not, Payne has created something which could easily become a two act play or even a television sitcom.

Michelle Payne possess an incredible talent as a writer, she is obviously a skilled people watcher and has an evident flair for comedy. If you ever have the chance to watch this superb play, make sure you do.

They’re teaching our children, but are they teaching the right things? Three young teachers navigate their way through adulthood and educating.

A peak inside a state school staff room. With fad diets, Instagram abs and the government imposing a sugar tax, do the educators even know what is good for us? The Staff Room catapults into a world of body dysmorphia for teachers and students alike where parents and teachers exist on opposite ends of the spectrum and an ever-growing workload does no one any favours. A Geography, History and PE teacher form an unlikely friendship within the dynamics and the solace of the staff room, bonding over all that matters; biscuits and banter.

Michelle’s first version of The Staff Room was a short play that previewed at the Actor Awareness Health Night at Theatre N16 in May. Following audience acclaim, Michelle has extended the play to one act, snapshotting the experiences of three young teachers who, through their daily coping mechanisms, crazed eating habits, and delightful cynicism, offer a behind-the-scenes view of the grievances of state education systems today.

The Staff Room
by Michelle Payne

Directed by Alula White and featuring Craig Webb, Hilary Murnane and Faye Derham, The Staff Room is an hilarious glimpse into the lives of those guiding the next generation.

It is 2002 – another Royal Jubilee year, and HRH (Mary Roscoe) is due to open a new Science wing in a 'sink' comprehensive where Dr Derek Jones … END_OF_DOCUMENT_TOKEN_TO_BE_REPLACED

Dr Anna LaRosa (Dr Stefania Licari) has a lot to say. Just as well, as she’s the only one on stage in this medical comedy, which largely draws its … END_OF_DOCUMENT_TOKEN_TO_BE_REPLACED

Nikhil Parmar’s one-man show, originally written as a TV pilot, manages to touch on a wide range of themes from Islamophobia to modern fatherhood with … END_OF_DOCUMENT_TOKEN_TO_BE_REPLACED

Handel’s 1738 opera Serse (or Xerxes) is an exploration of power, love and human frailty. King Serse falls in love with the voice of his brother … END_OF_DOCUMENT_TOKEN_TO_BE_REPLACED

Lea Salonga has her fans. She also has some superfans, the ones who yell, “I love you Lea!” at almost every opportunity. If that wasn’t enough, there … END_OF_DOCUMENT_TOKEN_TO_BE_REPLACED