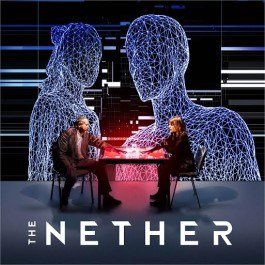 Back in the dark ages, when I was a sprog, role-playing computer games like ‘The Hobbit’, involved typing words on a Commodore 64 and was considered a marvel of the age. Nowadays, we have first player games such as ‘World of Warcraft’ or even current ultimate role player ‘Second Life’ where it is possible to completely immerse oneself in a virtual world and leave reality behind. But what’s next for role-playing games and how much further can virtual reality go? In Jennifer Haley’s “The Nether” at the Duke of York’s Theatre we go forward to the year 2050 where the internet has expanded to become The Nether a new virtual wonderland providing total sensory immersion where users log in, choose an identity and indulge their every desire.

But, and this is a huge but, what does the last part of that sentence mean in reality? Morris (Amanda Hale) is investigating a special site – The Hideaway – owned and operated by Sims (Stanley Townsend). A site that is a virtual world where men with certain urges go to indulge them in complete anonymity. One of the users is an old man called Doyle (David Calder) who is being pressured by Morris to deliver Sims so that the site can be shut down.

During the course of the investigation, the audience are taken to the site itself where we see how it works through the eyes of a young man Woodnut (Ivanno Jeremiah) introduced by Sims, in the guise of papa, to his pretty 11 year old daughter/worker/virtual reality creation Iris. There is an innocence and at the same time a knowing quality about Iris as she verbally encourages Woodnut to indulge fantasies he didn’t even know he had, and lose himself in the world created by Sims. Its obvious fairly quickly what this site is for, and I’m going to be honest, the subject matter left me feeling very uncomfortable. As the investigation continues and more is revealed about the investigator and those being investigated, the play gets more unsettling as both the characters and the audience face massive moral dilemmas. The ending to the show was both surprising and shocking but at the same time strangely poignant and unexpectedly touching.

“The Nether” is a limited 12-week run transfer to the West End from the Royal Court and is an amazing play. I read recently that video projection was going to be the next big thing in theatre and “The Nether” uses it superbly. Video Director Luke Halls and Designer Es Devlin provide a wonderful link via line drawings building layer by layer into full size virtual reality images that totally match the sets themselves as we move from the austere interview room ruled over by Morris to The Hideaway, Sims stunning 19th Century house with Poplar trees in the garden. The direction by Jeremy Herrin is gripping in the extreme, turning what could be a flashy ‘whodunit’ into a really enthralling piece of theatre. Credit has to go to the young actress playing Iris (Zoe Brough on the night I saw the show) who gave a measured and very mature performance throughout. In fact, credit must go to the entire cast for their outstanding performances delivering a complicated and superbly written, if at times unsettling, script in this compelling show.

There are two parts to the subject matter to consider, the move to true virtual reality – which is not as far away as you might think – and secondly what they are going to do once they are in there. If someone has unnatural desires and lives them out in a what to them is a 100% believable virtual world, then is society as a whole safer, since they are not attempting to bring their perversions into the real world? I honestly don’t know the answer to this, but it was the subject of a long and complicated conversation with my companion afterwards even though we weren’t able to satisfactorily resolve the moral dilemmas thrown up by this absolutely stunning show.

The Nether offers complete freedom – a new virtual wonderland provides total sensory immersion. Just log in, choose an identity and indulge your every desire. But when a young detective uncovers a disturbing brand of entertainment, she triggers an interrogation into the darkest corners of imagination.

Winner of the 2012 Susan Smith Blackburn Prize, The Nether is both an intricate crime drama and a haunting sci-fi thriller that explores the consequences of making dreams a reality. This new play follows an investigation into the complicated and disturbing morality of paedophilia in a digital world.

Age Restrictions:
16+. Contains adult content and language and scenes of a disturbing nature