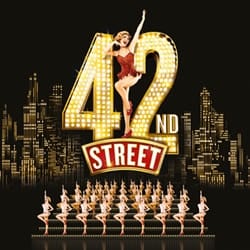 Everyone heading off to drama or stage school has a dream. They all want to be a star. Now some may deny it and say they would just be happy with an established career but secretly every one of them wants that five-pointed gold star on their dressing room door. The best way to achieve that stardom may be to start in the chorus then work your way up to lead actor. But, for the hero of 42nd Street at the Theatre Royal Drury Lane, there is a shortcut.

1933 and as the Great Depression really starts to bite, it’s announced that famous musical theatre director Julian Marsh (Tom Lister) is putting on a new show. Every hoofer in New York wants to be working on it and none is more determined than former Miss Allentown Peggy Sawyer (Clare Halse) but she’s too late to audition and everything seems to be going wrong for her. Can anything be done to rescue Peggy’s dream and get her on a Broadway stage performing in the same show as the beautiful Dorothy Brock (Sheena Easton)? Luckily, Peggy has a winning personality and makes a friend in juvenile lead Billy Lawlor (Stuart Neil) and he promises to help and so her hopes and aspirations are given a little more breathing space but, in a world where the choice is, get a job or join the bread line, can naive innocent young Peggy win through?

Now, just imagine the most splendid show you’ve ever seen. On every level, 42nd Street will beat it. For a start, there is a cast of nearly 60 performers. Then there are the sets by Douglas W. Schmidt, the dazzling costumes – seriously I have never seen more sequins in one place, well done to Roger Kirk – and the orchestra under Musical Director Jae Alexander, This is West End musical theatre on the grandest scale. No expense has been spared – it has been rumoured the show cost around 6-8 million to put on – and every penny has been spent ensuring that the audience has a fantastic evening.

Based on the story by Bradford Ropes and the subsequent 1933 movie of the same name, this version’s Book by Mark Bramble – who also directs – and Michael Stewart stays pretty faithful to the original. The story itself is not that complicated, nor does it really have any deep meaning – although the reconciliation of Dorothy and Pat, when the former chooses love over money has a nice moral tone – but it really doesn’t need one. 42nd Street is about music and dancing. Making sure Harry Warren and Al Dubin’s excellent songs are given the best possible setting, which choreographer Randy Skinner does spectacularly. There is a real touch of the Busby Berkeley’s in some of the big dance numbers – particularly in ‘Keep Young and Beautiful’ with a mirror flying in to give the audience a wonderful view from above the dancers. As with all well-known musicals, the big number has to be perfect and ‘Forty-Second Street’ is just that. It is a long song which must really take it out of the cast but it is a truly wonderful spectacle to behold.

To the cast and, as with everything else, only the best will do. Nearly sixty performers and not a weak link anywhere in sight. Unfortunately, Sheena Easton was indisposed on the two occasions this week – yes, that’s how good the show is, I went twice in three days – but her understudy CJ Johnson was fantastic in the role. And there is not enough praise that can be heaped on the head of Clare Halse as Peggy Sawyer. On stage for most of the show, she never seems to get a minute to draw breath between the singing and really intensive dancing. To be able to pull off performances as good as I saw – and then be smiling at the end of it – takes real talent and Clare has it in bucketfuls. Julian Marsh is a difficult character to perform. He must be ruthless, at times vicious but at the same time, there has to be a real show of humanity in him so that the audience doesn’t turn on the character. Tom Lister, manages to bring all the elements together in great style and, as he sings the final song, the audience is with him and really understands what drives Julian and the fact that no matter what, his first love will always be the theatre.

So, all this praise, was there anything I didn’t like? Let’s be honest, if I have been to see a show twice in three days then the chances are I liked pretty much everything. And that is the truth. From the overture to the ‘Finale Ultimo’ 42nd Street is everything and more than you can ever hope to see in a West End Musical. I first saw the show back in the 1980s at the same theatre and going back this week, it felt as if the show had come home and hopefully, is going to stay there for a very long time. A final word to sum up 42nd Street – awesome!

42nd STREET, ’The mother of all showbiz musicals’ (The Daily Telegraph) is the song and dance, American dream fable of Broadway. Broadway’s biggest show has arrived in London to rave reviews and nightly standing ovations, featuring the iconic songs 42nd Street, We’re In The Money, Lullaby of Broadway, Shuffle Off To Buffalo, Dames and I Only Have Eyes For You.

Young Peggy Sawyer is fresh off the bus from small-town America and just another face in the chorus line on Broadway’s newest show. But when the leading lady gets injured, Peggy might just have the shot at stardom she’s always dreamed of?

Think back. Has anyone ever said to you that looks don’t matter, its personality that counts’ Anyone that answered ‘No’ to that skip to the next … END_OF_DOCUMENT_TOKEN_TO_BE_REPLACED

A Streetcar Named Desire might just happen to be on the minds of regular theatregoers in London at the time of writing, on account of the Almeida … END_OF_DOCUMENT_TOKEN_TO_BE_REPLACED

Titus Andronicus is not usually a comedy, it is usually a bloody, villainous and vengeful tale, but tonight it is a comedy and a rather amusing one at … END_OF_DOCUMENT_TOKEN_TO_BE_REPLACED

This show is not without clichés - there are three of note in this production. Firstly, the French horn of the show’s title is personified, speaking … END_OF_DOCUMENT_TOKEN_TO_BE_REPLACED