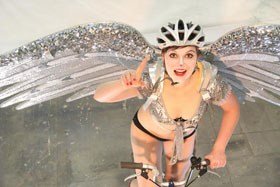 Although I wasn’t at all sure what to expect from the cryptically named ‘The Norm All Day with Dorothy Fale’ at the CogART Space in Old Street, it wasn’t a feminist clown in a red suspender belt, six foot wings, a platinum blonde wig and a cycle helmet. However, despite her silence, the clown had plenty to say and somehow melded outright comedy with hard hitting statements about the position of women today.

The night got off to a good start with a 10 minute warm up act by a stand-up comedian, recently returned from Edinburgh. Amusingly self deprecating and rather witty he in no way heralded the arrival of an exhausted and wing-burdened angel in sexy lingerie. Nonetheless she burst onto the scene and the meat of the performance began. With voice overs from Heidi Klum, pronouncing banal and conflicting pieces of life advice to lesser women, and from interspersed cleverly with extracts from Kafka’s ‘Metamorphoses’, and testimonials from other women, Jonna Nummela soundly dispatches a verbatim theatre version of the insanities that women unquestioningly play out in their everyday lives in a bid to make themselves heard. From juggling three babies to multi-tasking at work Nummela manages to deconstruct the days that women accept as normal and show just how ludicrous some of their aspects are – such as wearing four inch stilettos to work day in and day out, just to be taken seriously. The whole piece truly summates the life experiences women don’t even think about any more, and in unpatronising terms slices them open for comedic observation. The resounding piece of advice I was left with was to be happy without making a fool out of oneself, which in efforts to please can be only too easy to do.

The show at the CogARTSpace is relatively short, running at only 50 mins, and yet it packs a punch that resonates for a lot longer than that. It feels like it may become a seminal piece of fringe theatre and is an awful lot more adept and intelligent that the other feminist cabarets I’ve seen on the London fringe scene. I’d see it while you can, because it feels like Nummela might be a Greer at the start of her career, and I’m very interested in anything she might have to say again in the future.

Inspired by Kafka’s Metamorphosis, Victoria’s Secret and the recent beach body controversy this surreal one-woman show is ready to take Camden Fringe by feminist storm. Combining elements of stand-up, verbatim theatre and cabaret, a silent clown Dorothy Fale embarks on a journey through a regular day of everywoman. There’s only one twist; she’s turned into a model of a famous international lingerie brand. Yes, the one with those wings and all. She has become the ultimate fantasy but the reality is she is late for work. With a narrative fuelled by real-life testimonies of women of many shapes and sizes living in the UK today Norm All Day is hilarious expedition into womanhood, body image and the uplifting life philosophy of supermodel Heidi Klum.
@Born_to_Fale

Written by and starring: Jonna Nummela, an award-winning Finnish playwright and comedian is a current member of Soho Theatre’s Young Writers Programme and co-founder of Footnote Collective. Their recent work includes a playwriting residency at Arcola Theatre and a stand-up play ‘Suicides and Small Talk’ performed at Lost Theatre One Act Festival 2015, Old Red Lion Theatre and Ventnor Fringe 2014. Winner of Association for Amateur and Professional Theatres in Finland’s Playwriting Competition. @JonnaNummela

It is 2002 – another Royal Jubilee year, and HRH (Mary Roscoe) is due to open a new Science wing in a 'sink' comprehensive where Dr Derek Jones … END_OF_DOCUMENT_TOKEN_TO_BE_REPLACED

Dr Anna LaRosa (Dr Stefania Licari) has a lot to say. Just as well, as she’s the only one on stage in this medical comedy, which largely draws its … END_OF_DOCUMENT_TOKEN_TO_BE_REPLACED

Nikhil Parmar’s one-man show, originally written as a TV pilot, manages to touch on a wide range of themes from Islamophobia to modern fatherhood with … END_OF_DOCUMENT_TOKEN_TO_BE_REPLACED

Handel’s 1738 opera Serse (or Xerxes) is an exploration of power, love and human frailty. King Serse falls in love with the voice of his brother … END_OF_DOCUMENT_TOKEN_TO_BE_REPLACED

Lea Salonga has her fans. She also has some superfans, the ones who yell, “I love you Lea!” at almost every opportunity. If that wasn’t enough, there … END_OF_DOCUMENT_TOKEN_TO_BE_REPLACED