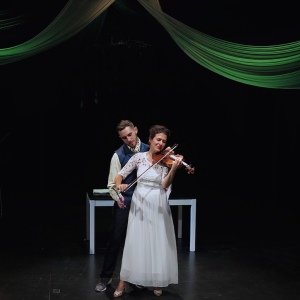 Vivaldi’s four violin concerti depicting Spring, Summer, Autumn and Winter, which we know collectively as ‘The Four Seasons’ are probably some of the most well-known music composed in the early eighteenth century. Pamela Schermann, the director, had the idea of performing them using five-string players and what sounded like an electric piano, breaking up the sequence of twelve descriptive movements with excerpts from Goethe’s novel ‘The Sorrows of Young Werther’ recited by an actor, and showing how Werther reacts to unrequited love over the course of a year.

Alda Dizdari is the solo violinist, giving a very romantic interpretation of the music and the sort of lush sound from her violin that Vivaldi would not recognise. She is ably accompanied by a string quartet led by Maria Gillicel, a very strong young player and certainly one to watch, Tayfun Can Bomboz, Anna Barsgjana and Adir Shyti. The solo violin is meant to represent Charlotte, whom Werther loves but who does not return his love: this does not work as Alda Dizdari’s playing is very emotional in style as if she is head over heels in love with him and especially as we do not see Charlotte’s real love, Albert, at all! All her playing seems to be directed at Werther.

Werther is portrayed by Samuel Lawrence who must be congratulated on his feat of learning Goethe’s poetic lines in an uncredited English translation. He is most successful in Spring and Summer when his youthful enthusiasm carries the day, but does not have quite the necessary pathos or depth of characterisation when it comes to Winter. The programme states that Goethe’s novel was so successful that men began to dress in the clothing style described in the book: it is a shame that the costume and set designer, Yole Lambrecht, has not been able to emulate this in her designs.

The director clearly found it difficult to give Werther much to do whilst the music was playing. Occasionally he spoke over the music, as in a melodrama, but too often he seemed either to be standing on the table and/or throwing his papers around. The rather cavernous set (just drapes) did not help here: a more confined acting space would have aided communication with the audience; as it was the 65-minute piece was surprisingly uninvolving.

One wonders if, as this was a production staged as part of “Opera in the City”, whether excerpts from Massenet’s opera ‘Werther’ might not have worked better than the spoken word, especially given the passionate music that Massenet supplied!

Vivaldi meets Werther: Four Seasons is part of Opera in the City Festival, London’s new summer opera festival from 20 August – 7 September at Bridewell Theatre. Now in its third year, it champions new works, reimaginations and UK premieres by the most exciting British and international artists.
https://www.opera-in-the-city.com/