It is a story not told often enough, at least not on stage, even in cosmopolitan London. I am reminded of a conversation I had some years ago with a black cab driver, after yet more Tube problems forced me to fork out for a taxi home – Britain is obsessed, my cabbie insisted, with the Second World War, with too many people not understanding that the Germany of today is a very different place to what it was in the days of the Third Reich. Our War capitalises on this ‘obsession’ with World War Two, looking at the additional challenges faced by black soldiers and their families. 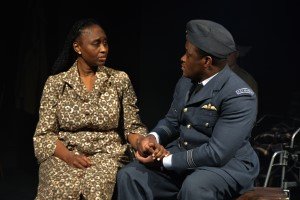 Black American troops stationed in Britain found a more inclusive society, at least relative to the segregationist policies of the US armed forces, which included restrictions on when they could go to the pub (enforced by American commanding officers, and nothing to do with landlords) – they had designated ‘colored’ (US spelling) evenings. This play focuses on the experiences of Nigerians who answered the call from the ‘mother land’ – Nigeria being a British colony at the time – though as far as Christian (Beko Wood) is concerned, the prejudice is just the same, with different (as in inferior) uniforms and a feeling that there is no point in indulging in any recreational activities, such are the rules and regulations on what black soldiers cannot do. Even his letters are vetted, read by colleagues and superiors, and commented on. Their remarks, unsurprisingly, were not exactly supportive.

Tommy (Tobi Olutayo) does his bit for the air force, and Olayinka (Lola Oteh-Cole) is a nurse, overworked and underpaid – some things, evidently, haven’t changed. Tommy begins enthusiastically but eventually becomes embittered by the manner in which he is treated. ‘The General’ (a suitably officious Ed Petrie) will only say in response to concerns raised by black troops that their ongoing commitment is vital to the war effort, so they can either put up with their lot and keep fighting, or otherwise the Allies can just lose the war, in which case their (and everyone else’s) contributions will have been in vain. It’s the sort of pompous approach that contributed to African nations seeking independence from Britain in the years following World War Two.

The play’s narrative doesn’t go as far as that, ending as it does on a positive note (one could even deem it to be a happy ending, but only for certain characters). The production does well to portray the ugly events of war in a manner that didn’t sugar coat anything – there was even racism when it came to who was allowed into an air raid shelter – and the death and destruction are as unforgivingly relentless as they must have been during the war itself. But any sense of urgency was questionable to say the least, and the show was never anything other than steadily paced, even during scenes where the soldiers on the frontline were engaged in combat.

Switching between different plotlines wasn’t problematic or overly complicated here, but it really could have picked up the pace. A scene with slow motion marching said it all, and the show should heed its own instruction, repeated in an opening sequence of movement and poetry, and “come on, come on, come on”.

‘Remember me more than a fighting man and the choice I made for the greater plan.’
Our War tells the compelling story of Ola, Tommy and Christian, as they travel from their native land Nigeria to war-torn Britain during the height of World War II.

Tommy & Christian enlist to fight with honour for their Mother Country, Ola is a nurse. Once they arrive, they experience the horrors of war on the battlefield and the indignities of being Black in the army and in the local community.

This new work by Andrew Ashaye brings to life two different worlds: the Mother Country, who claims to need them but not want them, and Nigeria who wants them but feels it has no choice but to let them go.

Our War dramatizes the bravery of these forgotten heroes, Black African & Caribbean men and women who contributed and made sacrifices for the war effort in Britain.

EverAfter, A mixed up fairy tale at the Chickenshed Theatre, is a great Christmas show. As the title suggests, this is a concoction of stories. The … END_OF_DOCUMENT_TOKEN_TO_BE_REPLACED

The thing about Panto is not to over-think it. It’s about having fun and surrendering to the Christmas spirit. Like Christmas crackers, there is a … END_OF_DOCUMENT_TOKEN_TO_BE_REPLACED

Anyone who's worked in investment banking knows it's largely an intellectually-free zone, polluted with people who calculate each other's value … END_OF_DOCUMENT_TOKEN_TO_BE_REPLACED

By the production’s own admission, the version of events as detailed in Bonny & Read is unlikely to equate to an exactly full and fair account of … END_OF_DOCUMENT_TOKEN_TO_BE_REPLACED