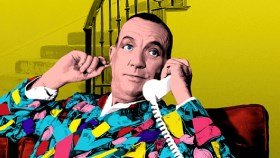 The poster should perhaps have been a clue. Noel (or is it Rufus Hound?) as Garry Essendine dressed in what looks like a clown’s outfit. This was not going to be a conventional production of “Present Laughter”. Coward fans are generally agreed that peak Coward as a dramatist (and performer) were the five undisputed comic masterpieces of the interwar years – “Hay Fever”, “Private Lives”, “Design for Living” “Present Laughter” and “Blithe Spirit”. In all of them wit is paramount – the display of an effortless talent to amuse with words. There is situation and character as well of course and in all of them, at times, the action borders on farce. As Frances Gray (1) puts it in respect of “Present Laughter” “The play contains episodes which come closer to French farce than anything else in Coward’s oeuvre” – but the farcical episodes do not make it, or indeed any of Coward’s work, pure farce. In ignoring this basic fact Director Sean Foley has vulgarised “Present Laugher” to such an extent that whilst it does get some belly laughs from some in the Chichester audiences those of us who understand Coward better left the theatre spluttering with anger.

Coward was not called “The Master” for nothing and his “Talent to amuse” relies on dialogue and character rather than slapstick. “Present Laughter” is full to the brim with brilliant lines many of them requiring study and practice to get them right. As Michael Billington in his coruscating review of this production put it “Coward was fastidious verbal stylist who had a faultless ear for the right word and the rhythm of a sentence”. Much of that subtlety is lost as the actors indulge in “… an orgy of stylised exaggeration”. I discussed an earlier production of “Present Laughter” with its Director Stephen Unwin. He said that the characters are “…real human beings, albeit ones who crack good jokes”. In farce the characters are generally unreal, exaggerated and often stereotypes.

The first scene of the play has the excited deb Daphne phoning a friend to tell her that she has spent the night in Garry Essendine’s house (and implicitly in his arms). Lizzy Connolly has been directed to play this character as if she was in a pantomime with grossly exaggerated gestures and a comic cuts upper-class voice and braying laugh. She trips around the stage as if the play is a Monty Python sketch. Subtle it isn’t. But that sets the tone for the rest of the play. The key role of Garry Essendine is played by Rufus Hound who unusually is the right age for the part (approaching 40) – it is an interesting casting. His brief acting career on his CV looks unpromising for the subtleties of Coward and he does not have matinee idol looks or physique. I have a feeling that despite this under more intelligent and sympathetic direction he might be able to play Essendine quite well. That we will never know. As it is he shouts and pratfalls his way through the role as if he was a character in pantomime at a third-rate provincial theatre. To be fair in the (relatively) calmer seduction scene with Joanna (Lucy Briggs-Owen) he impresses suggesting there is more to him than the loud and boorish style the rest of his performance offers.

Coward’s writing for women, especially his character creation, is good in most of his work and Present Laughter is no exception. Ms Briggs-Owen has a jewel of a part in Joanna and despite the constrictions of the director’s wishes restraining her she does well. The same applies to Tracy-Ann Obermann’s Monica (another terrific role) and Katherine Kingsley’s Liz Essendine. I wonder what these excellent three actresses felt about finding themselves in such a dumbed-down production. The reviews for this production are mixed, some are along the lines of Billington in condemning it as a travesty others more complimentary – excessively so in the case of Ann Treneman in The Times who says it’s an “absolute hoot” and enjoyed the fact that “gestures are coordinated to corps de ballet perfection” – which for this reviewer was probably the low point of a truly gruesome disaster.

Moritz von Stuelpnagel, who directed last year’s revival of Present Laughter with Kevin Kline as Garry Essendine, which secured three Tony Award nominations including Best Revival of a Play, says that “…each production needs to be built around the lead actor playing Gary”. That makes sense but not to the extent that you move out of genre from light comedy to raucous farce just because you’ve cast a comedian not an experienced actor in the main role.

Sean Foley in a promotional video says “They sent me this play, will you read it and will you direct it?” Having revealed that he only came to the play when somebody sent it to him (!) he then goes on to lambast and mock the traditional way of presenting the Master’s work. If you want to understand the reasons why this production will be anathema to all of us who believe that Noel Coward is “something of an English Chekhov” (as Stephen Unwin put it to me) rather than an English Feydeau then watch this video. Both Foley and Hound profess admiration for Noel Coward and for the play. But (in that gruesome phrase of our times) want to bring a “new audience” to Coward. Well fine, but the way to do that is to be true to the author’s intent to write a charming, funny often subtle and always superbly crafted light comedy. Not to turn it into a Whitehall farce.

Actor Garry Essendine is at the height of his fame. He’s handsome, witty, surrounded by adoring fans, and about to take his latest theatrical hit overseas. He’s also in the middle of a raging mid-life crisis.

Holed up in his studio, he is assailed from all quarters: a beautiful debutante wants to bed him, an aspiring playwright from Uckfield wants to worship him, and his own producer’s wife wants to… well, what exactly does she want?

Under the sardonic eye of his long-suffering secretary and the unshockable gaze of his estranged but determined wife, Garry struggles to keep all the balls in the air.

This play was first put on at The Mill at Sonning in early 2010 - the world has, of course, changed significantly since then, and the script has been … END_OF_DOCUMENT_TOKEN_TO_BE_REPLACED

It’s easy to see why the Orange Tree has brought this one back for another run, less than a year after its first outing here. This is a bold, … END_OF_DOCUMENT_TOKEN_TO_BE_REPLACED

I always loved Choose Your Own Adventure books. Definitely not the Steve Jackson ones where you had to roll dice (who did that?) to find out whether … END_OF_DOCUMENT_TOKEN_TO_BE_REPLACED

Well, there’s a bit about Pablo Picasso’s (1881-1973) paintings in this show that bears his name. But it’s mostly about his approach towards women. … END_OF_DOCUMENT_TOKEN_TO_BE_REPLACED