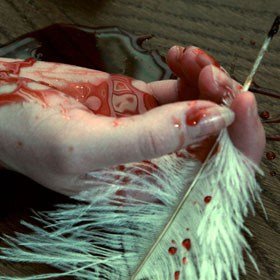 Two of my greatest loves in the world are whodunnits and theatre so when I got a chance to combine these on a sunny afternoon, I didn’t need to be asked twice. So, this afternoon saw me at Theatre N16 in Balham taking part in a promenade murder mystery The Killing of Charles Bravo.

Now, the first thing that you must know about this production is that it is based on a real event that happened in 1876. Lawyer Charles Delauney Bravo (Matthew Harrison-James) was a resident of The Priory in Balham and had been living there with Florence (Claire Gordon) his wife of four months when he suddenly was taken ill and died of poisoning. Although initially it was thought that he had committed suicide, eventually foul play was suspected. As an observer of these events, the audience first attend an auction presided by The Auctioneer (Tom Whalley) and then are split into three groups, guided around the wonderfully atmospheric Bedford Arms by Florence herself or Dr Gully (Richard Darnton) or the Housekeeper, Mrs Jane Cox (Kaitlin A Feeney). I’m not going to go into many details of what you are told or what you see or hear as you move around in your groups but I can promise that this is a fascinating delve into a real-life tragedy. And a word of advice, never underestimates the knowledge of servants. Both Fanny Plascott (Laura Hawkyard) and Mary Keeber (Saria Steel) may just have something interesting to impart.

Writer Katie Gibson has put together a taut thriller where there are clues and red herrings aplenty – part of the reason being that this murder, despite two inquests, has never been solved (though historian James Ruddick came up with an interesting theory in 2003) – and it is up to the audience to make up their own minds as to who the guilty party or parties was/were. The Bedford is an amazing pub with a truly superb and complex layout and Director Sarah Chapleo makes fantastic use of the space available to keep everyone on their toes. Starting in the pub itself where the audience receives a copy of The Times dated June/July 1876 and we are introduced to our group ‘leads’ and the story instantly transports us back to the late 1800s. My group was with the Doctor and we went round with him learning much. Various parts of the promenade stood out for me but I particularly loved the scene at the inquest.

I think if I have two criticisms of the production my first is that, for me, it could have gone on longer and the second, related to the first is that I was a bit disappointed that there didn’t seem to be an opportunity to question suspects. I was poised Marple/Poirot-like with a list of questions in my head that I had prepared for the three suspects and the rest of the household, and was a little frustrated I didn’t get a chance to prove my sleuthing skills. But this is probably more about me than the production which would have run considerably longer if everyone had got questions in.

Overall then The Killing of Charles Bravo was a very enjoyable way to spend some time this afternoon. It is based on a real event – part of which took place in the location where the production is being staged – and the acting is first-rate all the way through. As a promenade piece, it works extremely well and overall it was well worth a trip to Balham to see it. As to who the guilty person was, well only two people know for sure, the murderer and me (unless I got it completely wrong of course).

The Times called it “the most disgusting exhibition to have been witnessed in this generation”, with many writers and novelists, including Agatha Christie, exploring this dark and sinister side of the Victorian Era.

In 1876, a lawyer named Charles Bravo was murdered in his own house, by an unknown assailant, using the most devastating of poisons. To this day, no one knows the truth, or the real murderer, despite many motives and characters that have now been etched in history.

In May 2016, for an extremely limited run, Twenty Seven Live Ltd and Theatre N16 will play host to an exclusive, site specific, promenade performance, based on a real life murder case that took place right in the heart of Balham. Meet the very people who wandered these corridors, contemplating their fate, whilst exploring the historical rooms at The Bedford Arms.

It is 2002 – another Royal Jubilee year, and HRH (Mary Roscoe) is due to open a new Science wing in a 'sink' comprehensive where Dr Derek Jones … END_OF_DOCUMENT_TOKEN_TO_BE_REPLACED

Dr Anna LaRosa (Dr Stefania Licari) has a lot to say. Just as well, as she’s the only one on stage in this medical comedy, which largely draws its … END_OF_DOCUMENT_TOKEN_TO_BE_REPLACED

Nikhil Parmar’s one-man show, originally written as a TV pilot, manages to touch on a wide range of themes from Islamophobia to modern fatherhood with … END_OF_DOCUMENT_TOKEN_TO_BE_REPLACED

Handel’s 1738 opera Serse (or Xerxes) is an exploration of power, love and human frailty. King Serse falls in love with the voice of his brother … END_OF_DOCUMENT_TOKEN_TO_BE_REPLACED

Lea Salonga has her fans. She also has some superfans, the ones who yell, “I love you Lea!” at almost every opportunity. If that wasn’t enough, there … END_OF_DOCUMENT_TOKEN_TO_BE_REPLACED