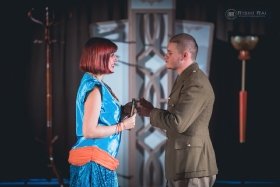 The intimate performance space at The National Archives in Kew was a unique and unusual experience. The set fitted nicely in with the theme and 1920s time period of the play. The plot can only be described as organised chaos as the sheer improbability of the play highlights the comedic value, enhanced by comic timing demonstrated by all characters. The nature of a farce is completely understood by the cast and audience as Bascom Barlow’s (Hugh Cox) greed and level of social class constantly override his sanity. This is featured through his dire need to own one of the correct bags, filled with either diamonds or money. He gets himself and others around him into worse situations by trying to fix the problem. From the larger than life characters in the Barlow family to the concise butler Jenkins (Christopher Hodges), each character clearly establishes a certain level of absurdity which continues to drive the plot.

Brilliant directing from Tony Cotterill allows the audience to feel totally immersed in the play by breaking the audience to performer barrier. The audience became a part of the performance as many of the cast enter and exit the stage from the rear of the auditorium.

Hugh Cox, as Bascom Barlow is a superb leading man for this play, he rarely leaves the stage and creates a character that, really allows the audience to gradually understand on a deeper level and feel sympathy for, whilst still holding comedic value. Neelaksh Sadhoo, as Richard Foyle, Bascom Barlow’s long-serving clerk, enters the stage on roller skates. The immediate lack of similarities between Barlow and Foyle strikes the audience as Barlow explains why spending £300 of the organisation’s money on roller skates was an awful idea. The imbalance and contrast of their character’s personalities produce an immediate element of humour as the audience wonder how they ever came to know one another. Christopher Hodges, as Jenkins slogs back and forth to answer the door, whilst acknowledging the audience. He appears to be the only calm amongst the inevitable storm and therefore creates a sense of stability throughout the play’s comic disarray.

All the cast had very strong characters and were extremely well rehearsed and this only further enhanced the comedic timing and value to the production. The costumes worn by all characters and music that was played upon entering the auditorium were very fitting of the period. A very enjoyable show.

After announcing their exciting move to The National Archives earlier in the year, Q2 Players are pleased to announce details of their first production in their new prestigious location.
When mogul Bascom Barlow is embezzled out of a fortune by an artful employee, he risks losing not only the money but also his fearsome reputation. With one bag full of diamonds, one bag full of cash and one bag full of – something else altogether – will the frantic Barlow be able to hold onto his business, his family – and his sanity?
With proposals, pregnancies and a chauffeur who can’t drive, can Barlow ensure he gets the right bags before he loses everything?