When we listen to or watch Shakespeare’s Romeo and Juliet, our attention is naturally on the titular characters and our minds are concentrated on following their story. Other people in Verona can easily be not so much forgotten about but skipped over in our pursuit of the star-crossed lovers. Think of Rosaline, thrown over by Romeo when he meets Juliet, or Friar John, sent to deliver Romeo’s letter. Or Mercutio, friend of Romeo who ends up dead by the end of Act I. Luckily, Writer Danielle Pearson didn’t overlook the unlucky lad, and taking the first few lines of his one major speech, has turned into a one-act play by the name of Queen Mab which has had its world premiere as the first show in Iris Theatre’s Summer Festival at St Paul’s Church Covent Garden. 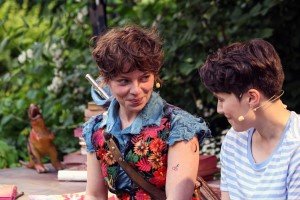 As night falls and the mortals move from waking to sleeping, Mab (Erica Flint) walks abroad through the darkened streets. As she goes, she dispenses dreams and nightmares to the sleeping mortals. Mab has been doing this for years, decades, centuries even and is pretty much bored with the human race. Tonight though, she stops at a particular house in a suburban street. The house belongs to the Roberts family and inside is fifteen-year-old Freya (Jo Patmore), asleep and dreaming of the love of her life. Mab stops to look in and Freya wakes up. Initially believing she is dreaming – as most people would when encountering a faerie in their room in the middle of the night – Freya eventually comes to realise that Mab is real and the two begin a friendship that takes them through emotional triumphs and anxieties as the world goes from normality to lockdown and living with a global pandemic.

I don’t normally start like this but let’s talk about the set for Queen Mab – I don’t think they could have picked a more perfect spot for a play about a magical being than the garden of St Paul’s Church. You leave the hustle and bustle of London and Covent Garden and go into this magical place where the worries of the outside world disappear. Isobel Nicholson’s design really makes the most of the space, with a small stage area (Freya’s bedroom) consisting of piles of books and the bed, and a large performance space dominated by a well-utilised tree stump in the middle, which gives great views for all the audience. Just entering the space, you knew magic was in the air, and Georgie Straight reinforces that with their assured direction. I really liked the fact that we only heard but never saw other characters, enabling the full focus to always be on Mab and Freya and their reaction to events around them.

This is the first play I’ve seen that is lockdown-related and the first to combine a 500-year-old bringer of nightmares with a global pandemic. And it really works. Danielle Pearson’s writing is spot-on throughout. The story is touching and absorbing, and the script mixes the language of the faerie kingdom with that of a contemporary teenager beautifully. They talk about the difficulty of communicating between the generations, but Mab and Freya seem to form an instant bond – I think it was the Swiss roll – that transcends their respective language forms. The story itself is a lovely mixture of the shallow and the deep, as teenage angst meets centuries of world-weariness.

Eric Flint and Jo Patmore completely inhabit their roles as Mab and Freya, respectively. Not only talented actors but musicians and singers as well, the two of them have a genuine rapport as their take their character’s relationship from a tentative start to a real friendship. They both look the part. Flint has really mastered the art of faerie movement as Mab, sinuous and ephemeral with more than a touch of otherworld-ness about it. Patmore ably demonstrates all the problems of youth and is utterly convincing as a love-struck teen dealing with family issues at a time when the world is going to hell in a handcart.

Running at around 70 minutes, Queen Mab packs a lot in but never seems rushed and the ending left me with a bit of a mental conundrum. Was Mab real or just the product of a teenage girl’s overactive imagination? Actually, ignore that as it doesn’t matter. Whether real or imagined, this tale of star-linked friendship is a truly lovely way to spend a summer’s evening.

Mab is an ancient being who doles out dreams and nightmares to her sleeping victims. She has watched humans for centuries, knows our worst fears and wildest fantasies – and quite frankly, she’s bored of us. That is until a chance meeting with Freya Roberts, a locked-down teen watching her best years slip away. As Mab and Freya strike up an unlikely friendship, the faerie is reluctantly drawn into the laughter, squabbles and anxieties of the Roberts’ family. But when grief threatens their world, can Mab maintain her impartial role of observer?

Inspired by Mercutio’s famous speech in Romeo & Juliet, Queen Mab brings this mythic dream-weaver into the mundanity of pandemic life. A coming-of-age tale for a fifteen-year-old and a five-hundred-year-old alike. Through music and storytelling, Queen Mab examines the euphoria, confusion and loneliness of youth.

Lizzie Boone (played by Selina Helliwell) is in therapy and we are about to find out why. From bullying at primary school to sexual assault in sixth … END_OF_DOCUMENT_TOKEN_TO_BE_REPLACED

An exhilarating evening at the uniquely atmospheric Sam Wanamaker Playhouse. Watching Shakespeare’s Measure for Measure here is the closest one can … END_OF_DOCUMENT_TOKEN_TO_BE_REPLACED

Clive Rowe and Tony Whittle have appeared on and off in Hackney Empire’s glorious pantomimes for the last 25 years. This year, for the first time, … END_OF_DOCUMENT_TOKEN_TO_BE_REPLACED