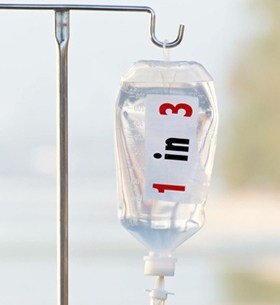 We’ve all heard the frightening statistic that 1 in 3 of us will be diagnosed with cancer at some point in our lives. What that means is that pretty much everyone knows someone who’s either had or been affected by the disease – and yet, for something so common, we find it incredibly hard to talk about, let alone deal with when it affects us directly.

Writer and director Anthony Orme’s 1 in 3 aims to tackle that difficulty head on, by sitting us down in a room where we can’t avoid the subject. 42-year-old Jeff (David Keogh) has just arrived for his first chemotherapy session. He’s scared, confused, bewildered by the whirlwind of medical tests and terminology going on around him – and alone, because he couldn’t face putting his wife of 20 years through the stress of coming with him. Enter Jasmine (Alice Merivale), a whirlwind of an entirely different kind. Just 17 years old, she’s been living with cancer most of her life, and along the way has learnt to make every second count, because she never knows how many she’s got left. She’s certainly not about to put up with any wallowing from Jeff, who’s already had more years, and achieved more in them, than Jasmine can even dream of.

So begins a friendship between two very different people who just happen to be going through the same thing. Through Jeff and Jasmine’s conversations, we meet their families, learn about their lives, and get a sense of the monotony of their treatment, nicely captured in a montage of scenes set to Oasis’ Half The World Away. But we’re also forced to confront a powerful lesson: life really can be far too short, so why on earth would we waste it feeling sorry for ourselves, or held back by fear of what might happen around the next corner?

It’s not a new lesson, perhaps, but that doesn’t make it any less important – and 1 in 3 delivers it in such a way that by the time the show ends, you feel like you’ve just been hit repeatedly by something very heavy. I’ve rarely heard such a stunned silence at the end of a show, or felt quite so affected by a story about two fictional strangers. What’s particularly effective is that this is a play about cancer – but cancer doesn’t get to be the hero. It doesn’t even get to be the villain. We never hear its name at any point; it’s relegated to no more than the circumstance that’s brought together two people, who are ultimately defined not by their illness but by every single moment that makes up their life – however long or short that might be.

Orme’s script is brought to life by a strong cast of four. Alice Merivale gives a very natural performance as Jasmine; a restless bundle of energy, she can’t sit still for more than a few minutes, living up to her own advice to make each second count. David Keogh’s personal experience of cancer is evident as he journeys through a range of emotions in front of our eyes – disbelief, terror, anger, optimism, despair – often without saying a single word; his body language alone speaks volumes. And there’s excellent support from Laura Ellis as the sympathetic but overworked Dr Hall, and Emily-Jane Ashford as nurse Sam, who tries to be there emotionally for Jeff and Jasmine, because there’s literally nothing else she can do. The inclusion of the medical staff, particularly Sam, is a nice touch, because it reminds us cancer doesn’t only affect patients; it also has an impact on those who care for them, become close to them and – all too often – end up losing them.

Now You Know Productions want to get people talking about cancer, and they’re also donating a share of the profits from 1 in 3 to Cancer Research UK. For that reason alone, I’d recommend buying a ticket. But in addition to raising awareness, the show has a broader message about the importance of appreciating the little moments in life, while we still have the chance. Expect to feel simultaneously devastated and uplifted by this incredibly powerful and essential piece of theatre.

Life is more than the days you have left. Jeff & Jasmine are two very different people, at very different stages, sharing one life threatening disease. But through each other they learn why life is worth being threatened.

Written & Directed by Anthony Orme, the play tells the uplifting story of how life is measured in friendship and the experiences had, not hours.

I wouldn’t exactly say Ben Forster appearing as himself in this musical comedy is a career highlight (he is, after all, someone who has played the … END_OF_DOCUMENT_TOKEN_TO_BE_REPLACED

It’s an intricate plot, laced with some subversive humour - that the female character is simply called ‘The Woman’ (Molly Lynch), for instance, is … END_OF_DOCUMENT_TOKEN_TO_BE_REPLACED

Andrea McArdle didn’t, when the 1978 movie Rainbow was released, look or sound like Judy Garland, and she still doesn’t. You’d be forgiven for … END_OF_DOCUMENT_TOKEN_TO_BE_REPLACED

TENNIS ELBOW is the first play that John Byrne has written for thirteen years, and is in fact a companion piece to his critically successful Writer’s … END_OF_DOCUMENT_TOKEN_TO_BE_REPLACED

It’s all a bit banal, really - or perhaps I’m too heavily influenced by some of the other online productions that I’ve seen recently, which deal with … END_OF_DOCUMENT_TOKEN_TO_BE_REPLACED