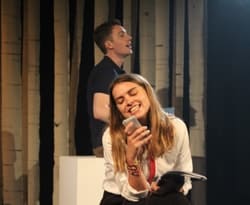 I begin by quoting two exit poll verdicts from separate fellow theatregoers, if only because I don’t entirely agree with either of them. One deemed Adam & Eve to be “depressing”; another asserted the storyline was “clever”. The former viewpoint is too reductionist, and doesn’t take into consideration the famous Tennyson quote, “’tis better to have loved and lost than never to have loved at all”. The latter viewpoint is (albeit with the benefit of a car journey’s hindsight) dangerous if taken at face value. This is a hard-hitting tale, with devastating consequences for the title characters. ‘Cunning’ seems more appropriate; ‘manipulative’ even more so.

The story is set in contemporary England, but this doesn’t stop it from having – broadly speaking – some parallels with the biblical story that the show’s title suggests. Nikki (Anuschka Rapp) manages to deceive both Adam (Christopher Adams) and Eve (Jeannie Dickinson) to achieve her own purposes. Perhaps unintentionally, Adam even eats a fruit at one point, though it does not take Eve to physically bite into it herself for her to fall for Nikki’s bait. And why should it? After all, a husband and wife are “one flesh” (Genesis chapter ii, verse xiv).

Things start off rather jovially, as is the case with many a modern play, trotting along steadily until a critical incident comes along, which changes the course of the plot and its characters suddenly and permanently. I’ve seen it so often I’ve almost come to expect it from new writing. What is extraordinary here is that Tim Cook’s script deviates from this trend. There isn’t a figurative multi-vehicle pile-up that appears out of nowhere, but a gradual build-up, layer on layer.

The increasingly strained relations between Adam and Eve are not helped by Adam’s reticence to keep Eve fully updated with everything he knows with regards to a career-changing development at his place of employment. From his perspective, if I’ve deduced it correctly, he doesn’t want to unnecessarily upset Eve or to get her worried. But the candidness only leads Eve to wonders if there is anything else that is being hidden from her.

As with the best of plays, the attention to detail is remarkable, and despite a relatively short running time of just over an hour, a lot of topics come under discussion, in some depth, including the choices younger couples face with regards to (for example) buying a property and starting a family of their own. The character development is admirable, and the twists in the plot keep coming, right up to the final moments of the play.

I began to wonder if Nikki’s part was underwritten, as she started to become conspicuous by a prolonged absence from the stage. Though she has a pivotal role as the play draws to a close, some events involving her and her supposed conduct are described rather than dramatized. Whilst I appreciate that the advancement of the narrative in forward chronological order keeps things straightforward, the odd flashback wouldn’t have gone amiss.

But as far as one-act plays go, this is, as my fellow reviewer Terry Eastham might (probably) put it, a first-rate production. All three actors perform brilliantly. The depth of the drama is just right, as is the varied pacing. The scene changes were rapid enough, assisted by a sparse-ish set. A decent script is brought to life so well that it was never remotely dubious as to where any given scene was set, despite only negligible changes to the stage layout. The audience is taken on a fascinating and compelling journey. Uncomfortable but thrilling, in an era of relative truth and ‘alternative facts’, this thought-provoking production is utterly phenomenal.

What does it say about the state of our relationship. If one small thing comes along.
And destroys it forever?
Newlyweds Adam & Eve are moving to the countryside, leaving the city behind for good. They’re going to buy a house, start a family and live happily ever after. But when Adam is suspended from work and accusations are made, they’re forced to question how well they really know each other.

What lurks beneath the surface? And how can their marriage survive in a post-truth society?

Adam & Eve is a startling new play about trust and the nature of accusations from award-winning Royal Court Young Writer Tim Cook.

It wasn’t that long ago when anyone who gave warnings about Sleeping Beauty would be dismissed as more than a little ridiculous. The concern is that … END_OF_DOCUMENT_TOKEN_TO_BE_REPLACED

Alby hates themself, but can't work out why, and that irks them, even if they don't quite realise it. In this witty, occasionally unsubtle, but … END_OF_DOCUMENT_TOKEN_TO_BE_REPLACED

I have seen some outstanding acting recently at the intimate Finborough Theatre, and this new play is no exception. The highly talented cast quickly … END_OF_DOCUMENT_TOKEN_TO_BE_REPLACED

In the pandemic (remember that?) I worked in adult social care. My role was to help older people in their own homes with daily tasks - I’d cook meals, … END_OF_DOCUMENT_TOKEN_TO_BE_REPLACED