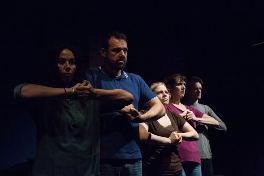 Blackout is often a play’s final stage direction. However, at the Hope Theatre in Islington it is both the title and the starting point of a journey through the ravages of alcoholism.

You often hear stories of pub theatres where an errant drunk has taken a wrong turning out out of the toilet, lurched through a couple of doors and stumbled out into the show. This didn’t happen on the night we were there, but if it had, the bloke – it’s usually a bloke – would have found himself upstaged and surrounded by a human zoo of degradation.

Here are young men and women lolling in and out of consciousness – hence the play’s name – by tipping industrial quantities of liquor down themselves, forgetting what they’ve done or where they did it, hence also where they left their clothes, their so-called friends, their youth, their lives; then knocking themselves back into oblivion with the booze-cosh in case some dire spiked memory should have the nerve to barge into their space with the pain of daylight. “Sometimes I would come out of a blackout half way through a sentence,” pleads one character. One of the things that puzzles non-alcoholic partners and friends of active alcoholics is the memory loss of blackout and the assumption is often made that the alcoholic is lying when they say they cannot remember, but they really can’t.

Clicking back into the body on the way out of blackout is one of the more terrifying experiences of alcoholism but all credit to author and actor Mark Jeary for also making it one of the more amusing. There is dark comedy inherent in the illnes and in the recovery from it and this is used to good effect by Jeary.

So no room for reflection when there are so many pressing japes to be enacted: the teetering on the parapets of tall buildings, the urinating from the top of the Scott Monument in Edinburgh – this by a woman, the kitchen farce involving a microwaved garment and fire-melted floor tiles; not forgetting (though that would be nice) the killjoy hangovers that arrive like an invoice the following morning, or is it the following night, or have weeks passed? Or years? Plenty more where this came from. Just neck another bottle and there it is. 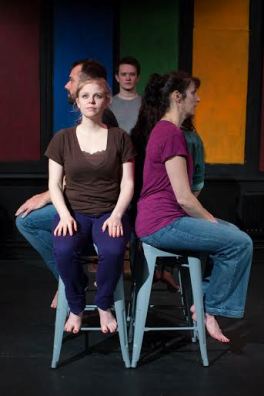 Inebriation – other people’s of course – can be so boring through its repetitiveness that it is a tribute to this piece that it holds our attention unflaggingly. It can be seen, and heard, as a kind of chamber work for five human instruments, presented in three movements. The first of these is played in a mood of circling darkness, shot through with jags of blissed-out dazzle and intimations of a happiness that can only be had by escaping from the self down some bright wormhole away from all that is daily, therefore dull, and moored to what those boring abstainers and unbelievable moderates would class as present actuality.

If this movement can be described as paralytic, then the second is chastened and yearning, touched by the real (that word again) hope of some joy that does not lapse with the curdling of the last excess.

Hard to imagine how such a show might have been devised by someone without first-hand experience of addiction; no need to try however since Jeary has, as they say in the States, walked the walk. You could even cite the influence of Stanislavsky were it not for the fact that while Jeary was living the nightmare it was from compulsion rather than from the demands of a method-actor’s research.

He has likewise lived the contents of the third “movement,” which can be summarised as wellness. This section is the nearest you’ll get to a meeting of Alcoholics Anonymous without stumbling through that particular door. The world has been turned on its head, or rather feet. The old notions of liberty through drink are shown up as the frauds they were and the agents of bondage they could become again if you slip. From this clear-eyed, demanding perspective the old euphemisms like out-of-it and well-away take on an awful aspect.

Here – if he gets here – the had-enough drinker – would run into hard words, phrases and concepts: abstinence, sobriety, amends and  – God (or Higher Power) help us – serenity. Not forgetting recovery. Yes, you have been sick – just think of those symptoms – but need be no longer. The vocabulary cannot help but sound carbolic and Victorian. But surely better this, runs the argument, than the lush deceptions and toxic knockabout of the old way: well oiled, loaded, rat-arsed, zonked, pick your own. God is one of the nubs of the play, as the Higher Power is for AA. God becomes for many an excuse to get drunk again because many an alcoholic finds the notion of a metaphysical being unbelievable. It requires hard work and a suspension of cynicism for such a person to work through the Twelve Steps with their emphasis on the Higher Power. But whether God exists or not is in fact beside the point and the Higher Power can be whatever a person finds helpful, even the “atheist bus” if they so choose. Borrowing the language of Freud for a moment, although it was his one-time disciple Jung who most influenced the formation of programme, the point of the “spiritual” side of the programme is to deflate massively the “ego” in order to enable the “super-ego” defend the “id” against the degradation of taking another drink. The alcoholic, if they are to recover, has to realise they are not the most important thing, or the only thing, in the universe. Embracing a concept of a Higher Power, whether that is God or simply the power of the rooms, is a significant step towards that healthier understanding of a person’s place in the world.

But in this play, as in the rooms, we see this both working and failing. There is plenty of drama as the process of recovery takes place, or doesn’t. Drunk behaviour can have a dreadful allure; think of Oliver Reed. Its tales are cautionary; think of George Best. It is precisely because of its demonic power that its wrestling-to-ground by mortals makes for a strong narrative. Partly for these reasons Blackout comes across as a member of the verbatim drama category, the kind that makes its dialogue from actual quotes from actual people, as did, for example, David Hare in The Permanent Way.

As such, this one could have a continuing life as an educational resource. The stories embodied by these five actors would resonate, with hope as well as sadness, for countless children and young adults. This play could surely have an extended life touring schools and colleges, an engaging and literally sobering journey through the illness, and the AA solution to recovering from it.

Jeary himself is worryingly convincing as the active volcanic drunk, as are his four accomplices, with Rory Farbairn outstanding and supremely watchable as the gay, sensitive but self-thwarting party animal, the “newcomer” to the rooms.

Sarah Barron, playing a woman sober a year, is consummate and committed, both to drinking and then, sobriety. She is the woman we meet daily at 7am in Tesco whose troubled face hints darkly at the paddling that takes place under the surface just to stay afloat. Beth Kovarik, whose charter is sober six years, is enchanting innocence, the recovering alcoholic who must struggle because none of her friends or colleagues could ever believe she is one and press her ceaselessly to have another drink. Kim Maouhoub, eight years, is the wise, earnest focused member who knows, and lets us know, that she will not survive if she ever picks up. This is supremely talented, passionate cast that takes us to the edge of the illness and into its recovery. Under Gavin Curtis’ direction of their sharp, painfully funny dialogue, they are never less than – sorry about this – tight.

I wouldn’t exactly say Ben Forster appearing as himself in this musical comedy is a career highlight (he is, after all, someone who has played the … END_OF_DOCUMENT_TOKEN_TO_BE_REPLACED

It’s an intricate plot, laced with some subversive humour - that the female character is simply called ‘The Woman’ (Molly Lynch), for instance, is … END_OF_DOCUMENT_TOKEN_TO_BE_REPLACED

Andrea McArdle didn’t, when the 1978 movie Rainbow was released, look or sound like Judy Garland, and she still doesn’t. You’d be forgiven for … END_OF_DOCUMENT_TOKEN_TO_BE_REPLACED

TENNIS ELBOW is the first play that John Byrne has written for thirteen years, and is in fact a companion piece to his critically successful Writer’s … END_OF_DOCUMENT_TOKEN_TO_BE_REPLACED

It’s all a bit banal, really - or perhaps I’m too heavily influenced by some of the other online productions that I’ve seen recently, which deal with … END_OF_DOCUMENT_TOKEN_TO_BE_REPLACED