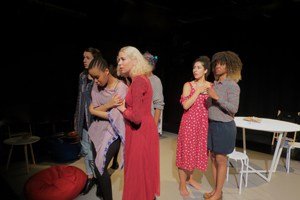 The New Wimbledon Theatre continues a run of quality productions at its Studio theatre with Blown Youth. Despite not knowing what to expect, I was quickly impressed by this new play by Dipika Guha.

Blown Youth follows the intertwined lives of seven young women, centring around Celia (Lydia Bakelmun), an aspiring actress who struggles with her anxiety surrounding her artistic pursuits – it’s such a strong compulsion and yet inspires such a huge degree of paralysis, a feeling I felt I knew all too well. Her attempts to navigate her life as a creative queer woman serves to bring up much confusion and self-doubt, which Guha’s writing and Bakelmun’s performance handle with delicacy. There are moments where some dialogue causes cringe in its abrupt level of drama, but that didn’t mean that I did not relate to what was being said. In fact much of it was all too familiar, issues which are always hard to talk about (but should be discussed). Guha has handled difficult subjects with finesse, and the wealth of female talent on stage serves it well.

Depression in particular is an extremely hard subject to talk capably and sensitively about, but Blown Youth does an excellent job of it. Anne (Comfort Fabian) embodies the sheer exasperated pain one can experience in this situation – her desire to spend her money to the point of distraction, her inability to really engage with the consequences of her actions, is relatable and does not belittle the depressed condition. It should be noted that Fabian is particularly iridescent during the Shakespeare scenes, which feature towards the end of Blown Youth.

There are so many likeable characters here, and that is a joy to experience in a world where 2D female characters still crop up. Ray (Sophie Kilburn) and Shia (Lukwesa Mwamba) are both relative newcomers, but provide flawless performances – Mwamba in particular does not fail to shine with every line she delivers, certainly a talent to be watched. Audre (Laila Bouromane), Jo (Sophia Lockhart) and Margaret (Lola May) round out the cast, though they each do not get as significant an amount of time to prove their stuff. I would normally not go to the length of mentioning so many performers in my reviews, but this play features a cast most deserving of admiration.

Each scene opens with projected text, which is occasionally hard to read around certain staging arrangements. The amount of information given is often not required, however, this comes to be used to great effect with the final projection piece (though it could have been shortened a little). This adds a unique dimension to the play, embracing its desire not to oversimplify complex emotional issues.

Choreographed even in the dark, Dominic Cooper’s direction and Lucy Brown’s set design enable a play that is visually compelling, the arrangement and subtler details of the performance/set combinations providing an aesthetic experience without faff.

The scenes are each subtle and delicate in their composition, even if they are occasionally peppered with slightly overdramatic dialogue undermining the natural quality; the ladies on stage are just so excellent, however, that they imbue each and every line with a real, relatable quality.

The play does feel long at 90 minutes without an interval, and given the sheer number of characters vying for stage time, a few remain less developed.

However, Celia’s final moments of frustration – with her inability to exert her creativity, her feelings of having failed – feel very truthful, particularly as the play comes full circle, with scenes of Hamlet facilitating a unique look into the madness and indecision Celia faces. The demand falls on her to find more outside her creativity, a difficult challenge for someone who is both as enlivened and strained by their creative pursuit as Celia.

In all, I cannot fault the ambition and delicacy of this play. There were so many elements of the story which spoke to me intensely, and I was left very moved by the experience. It might not resonate with some the way it resonated with me – but I am a young woman living in London, trying to pursue a creative career. This play spoke directly to my experience, and I can therefore only look forward to whatever Guha writes next.

Blown Youth
Inspired by Shakespeare’s Hamlet, Blown Youth asks what happens to the universe if a woman is at its centre.

All Celia wants is to play a great role. But unlike Hamlet, there isn’t one for her to inherit. Despite her sophisticated education and a profound intellectual commitment to helping other women somehow Celia, like her counterpart, cannot act. Still, it seems that her consciousness doesn’t only lie inside her. It seeds and sprouts amidst her twenty first century kinships: her friends.

Think back. Has anyone ever said to you that looks don’t matter, its personality that counts’ Anyone that answered ‘No’ to that skip to the next … END_OF_DOCUMENT_TOKEN_TO_BE_REPLACED

A Streetcar Named Desire might just happen to be on the minds of regular theatregoers in London at the time of writing, on account of the Almeida … END_OF_DOCUMENT_TOKEN_TO_BE_REPLACED

Titus Andronicus is not usually a comedy, it is usually a bloody, villainous and vengeful tale, but tonight it is a comedy and a rather amusing one at … END_OF_DOCUMENT_TOKEN_TO_BE_REPLACED

This show is not without clichés - there are three of note in this production. Firstly, the French horn of the show’s title is personified, speaking … END_OF_DOCUMENT_TOKEN_TO_BE_REPLACED