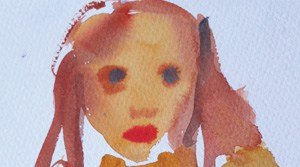 The fragile frame of Ruth, a patient in a York psychiatric ward, is the centre pin of Bridlington, an emotionally flooring new play addressing the at times tragic and at times spectacularly funny sides of life in an institution for the mad. Addressing the audience Ruth weaves an engrossing narrative of her life over a decade during which the lines between reality and fantasy are virtually indistinguishable. It is, as Ruth would declare, ‘gobsmacking’ how this production has managed to pin down at one and the same time an experience of how it feels to suffer from mental illness and an accurate sense of onlooker perception of the ‘mad’.

It is Julia Tarnoky playing Ruth that stuns the audience into both seeing and understanding with her sheer transformative ability. Nothing short of brilliant, she is a perfectly mad embodiment of the dichotomies that manifest in people suffering from mental health issues; she is vulnerably self-assured, childlike and nurturing, enrapt in fantasy that breaks through into incongruous practicality.

Putting Ruth the individual, front and centre, Peter Hamilton has given a sympathetic voice to the mentally ill, he has found the beautiful aesthetic in this person and used it as a window onto a world that is underrepresented.

Hamilton’s desire to explore the damage that has been done to the human connection with nature, the ‘nature-deficit-disorder’ is a timely extrapolation of literature that has concerned these themes from the time of the industrial revolution. Dickens, Shelley and the Brontes among others were enraptured by the effect that the change in industry was wreaking on the individual. Hamilton demonstrates that these considerations are infinitely relevant to mental health. We live in an unnatural world and it strikes me that those like Ruth, who can’t deal with the reality that they crave, are actually far less mad than the rest of us who pretend that the world is normal. Ruth and Bernard, her co-inhabitant, friend and lover, are living in parallel to the world, both recoiling from it and wanting access to it. They are not quite sure if they desire or despise the suburban semi-detached and all its trappings. Ruth has in her wardrobe both a punk kilt and a 1800s dress. Her affectations range from the demure flirtations of a Bronte heroine to the outraged protestations of the trapped and angry. And above it all her mental health issues help her to deal with a world that has turned her into a victim and made her vulnerable to supposed caretakers such as Eric, played exceptionally well by Steve Hunt.

This smelting pot of different elements works perfectly together and from Wuthering Heights to the illusion of the German WW1 submarine captain, the contrasting images and antagonistic ideas manage to pull together into a convincing and compelling narrative. It is beautifully ordered chaos.

Hamilton had a desire to write plays about provincial towns in England that begin with the letter ‘B’, a seemingly arbitrary decision that has led to the creation of amazing theatre. It is perhaps noteworthy that the oldest and most famous institution for the mad also begins with ‘B’ – Bedlam.

And so the play as a whole takes place in and mirrors the whole crazy dance that is life. And it questions who is medicating the mad and what their right is to do so. It is interesting that for the entire play the doctor remains invisible. And at the end Ruth’s haunting repetition ‘It’s not right, it’s not right’ demonstrates the conflict that we have come to in our relationship with both nature and the co-inhabitants of our planet. This play is surprising and a revelatory piece of new writing. It deserves audiences who are willing to both laugh and cry.

Ruth and Bernard are both psychiatric in-patients. Ruth is the leading light of the Therapy Unit’s Poetry Workshop and has read Wuthering Heights forty-nine times, whilst Bernard is obsessed with anti-submarine warfare in the North Sea 1914-18. They enjoy a lively but ultimately doomed relationship.

This will be the third marvellously surreal play that Ken McClymont has directed at the Rosemary Branch. Previous work includes The White Whore and The Bit Player (2011) and No Picnic (2012).
With Christopher James Barley, Richard Fish, Steve Hunt, Antoinette Sym and Julia Tarnoky.

How can a play be both charming and devastating? Through its tight script, abundant humour and pitch-perfect performances, 4th Country manages to … END_OF_DOCUMENT_TOKEN_TO_BE_REPLACED

Britain, so a London cab driver once told me, is obsessed with the Second World War, as though it happened just recently. Power Luncheon would seem, … END_OF_DOCUMENT_TOKEN_TO_BE_REPLACED

William J Dunleavy, author and star of this monologue play, is a writer and face to watch. He enters the room (as the staging is more geared towards … END_OF_DOCUMENT_TOKEN_TO_BE_REPLACED

Cirque du Soleil’s Luzia is a joyful whirl through a psychedelic Mexico, which reminds us why live theatre is so special. Anyone who goes to … END_OF_DOCUMENT_TOKEN_TO_BE_REPLACED