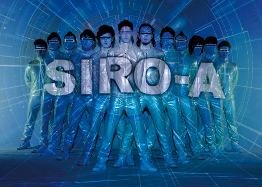 If you can imagine a mixture of electronica, street dance, ballet and geisha performance then you have a rough idea of what Siro A is all about (as well as a particularly abstract imagination). Siro A draw inspiration from a variety of art forms to create something that defies classification. This group of artists from Japan gave us a fantastic, ultra-modern show at Leicester Square Theatre. Starting off with a tribute to the UK, they led us through a series of sketches which included retro computer games, Pharrell Williams’ song Happy and Disney’s Frozen; there really is something for everyone.

Funny, creative and occasionally beautiful, Siro A has put together a mesmerising show that effectively combines traditional art forms such as mime with the best of what modern technology allows us to achieve. There are plenty of “how did they do that?” moments that gets your eyes glued to the stage and your brain just a little confused. Perhaps remarkably, the sketches are coherent and easily accessible to people of all ages.

Japan is well-known for precision engineering. In this case, split-second timing and meticulous use of movement are required to achieve the desired effects and the four performers do this near-perfection; Toshiya Arai, Yohei, Fumiya and Keiji Miya work together like Toyota engine. The fuel that drives them are the two techies: Daichi Norikane, a video artist and Kentaro Homma, a DVJ (kind of a cross between a disk jockey and a video jockey). However, with something as hi-tech as Siro A, problems are bound to occur once in a while. It was a shame that there were some technical difficulties that interrupted one of the sketches. While the performers dealt with it well and the problem was sorted out swiftly, it did feel rather jarring.

Leicester Square Theatre is an intimate venue that usually plays host to comedians and rather more laid-back affairs than Siro A. While perfectly sufficient, I felt there was scope for the performance to be bigger as the sound system didn’t quite pack the punch that Siro A could easily deliver. I almost felt like Siro A would be great in an IMAX theatre. However, the staff at Leicester Square Theatre were polite and the whole place had a good vibe. Being just off Leicester Square itself, it’s easily accessible and convenient.

Overall, Siro A provided a thoroughly enjoyable evening’s entertainment. With some festive elements brought into this show, it could even be considered as an alternative (or companion) to the more-traditional pantomime for the family in the run up to Christmas.

If the audience were to be exposed to full versions of the seventy-four songs listed in the programme, it would be a very long show indeed. I suppose … END_OF_DOCUMENT_TOKEN_TO_BE_REPLACED

How can a play be both charming and devastating? Through its tight script, abundant humour and pitch-perfect performances, 4th Country manages to … END_OF_DOCUMENT_TOKEN_TO_BE_REPLACED

Britain, so a London cab driver once told me, is obsessed with the Second World War, as though it happened just recently. Power Luncheon would seem, … END_OF_DOCUMENT_TOKEN_TO_BE_REPLACED