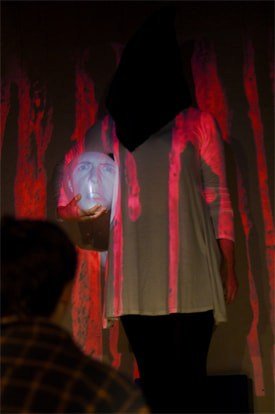 The thing about this production of Dante’s Divine Comedy is that it’s more irreverent than it is divine, and while there are moments of humour, these are really flashes of comic relief in an otherwise thoughtful and philosophical play, so it isn’t really a comedy either. At a stretch it could be for those who happen to enjoy schadenfreude.
Anyway, this is a show that feels like a complete story, and with a running time of 90 minutes, that’s quite an achievement, given that it’s based on a book that’s either 592 (Wordsworth Editions, 2009) or 752 (Oxford University Press, 2008) pages long. An audio book of the epic poem on YouTube is 13 hours and 4 minutes long.

What should also be borne in mind is that the show is based on a fourteenth-century text that not only does God but takes its narrator through hell, purgatory and paradise. Here, it’s done in a twenty-first-century manner, with contemporary costumes and modern dialogue. It’s not supposed to work. But it does work, and it works gloriously. Video projections assist greatly with scene setting and scene progression, and the set is kept simple but remarkably effective. The combination of hi-tech and lo-tech techniques, ranging from elaborate moving images to good old silhouette projections, was very pleasing to see and ensured no over-reliance on any one style of staging.

The sheer amount of different elements deployed in this production overall would, if I were to give it all away and attempt to list all of them, make it sound as though the production were merely throwing the kitchen sink and then some at the show, hoofing (to borrow a football term) and hoping for the best. But it is very focused, and all the various elements serve a specific and constructive purpose, driving the story forward. Allow me to give just two examples. Firstly, the use of physical theatre helped to increase the intensity of certain scenes. Secondly, the way the lighting is used leaves little, if any, room for ambiguity as to the dangers faced by Dante (Alex Chard, whose impeccable stage presence makes him perfect casting for the lead role).

My only disagreement with any of it is its portrayal of the London Underground as ‘purgatory’. I’d say it’s as hot and unpleasant as ‘hell’. The real point I wish to make here is that it was a good call to bring the show into the modern day. The original text is, by contemporary standards, unkind at best and downright offensive at worst towards Jews, Muslims and the LGBT+ communities. Strip all that out, such that the audience is not shocked unnecessarily, and the play can then focus on the more salient aspects of the narrative. Not that there aren’t things to be shocked about – here, one scene sees Dante being treated in paradise, repeatedly, in a particularly abrasive and disturbing manner.

Some of the theological arguments in the dialogue may prove a tad too trying for people who have little interest in questions relating to religion. Very early on the audience is invited to buy into the whole hell/purgatory/heaven premise by Virgil (Jack Blackburn), and quite forcefully. An all-female chorus (Sofia Greenacre, Marialuisa Ferro, Sophia Speakman and Michaela Mackenzie) portrays layer after layer of periphery characters with gusto and stamina, while Kathryn Taylor-Gears’ Beatrice, by contrast, has a calmer, icier demeanour, befitting the character.

This is a mesmerising yet disconcerting, brisk yet reflective, thought-provoking yet triumphant piece of theatre. Highly recommended.

Dante’s Divine Comedy is a journey to hell and back. The epic poem is brought kicking and screaming into the 21st century with imaginative choreography, gorgeous multimedia and a vast array of colourful characters.

After a long period in exile, and riddled with grief over the death of his love, Dante attempts to take his own life. But he is stopped by a mysterious stranger who leads him on a terrifying and life affirming quest through the circles of the inferno, purgatory and paradise.

It is the duty of every citizen to answer the call to support and protect the United Kingdom and its allies so last night, while the rest of the … END_OF_DOCUMENT_TOKEN_TO_BE_REPLACED

Harold Pinter only ever wrote one novel. And, let's be honest, he didn’t rush into this literary endeavour. He started it in 1950 and the book was … END_OF_DOCUMENT_TOKEN_TO_BE_REPLACED

How far would you go for the people you love? What lies would you tell? What sacrifices would you make? That’s the question at the heart of The … END_OF_DOCUMENT_TOKEN_TO_BE_REPLACED

“All political lives, unless they are cut off in midstream at a happy juncture, end in failure, because that is the nature of politics and of human … END_OF_DOCUMENT_TOKEN_TO_BE_REPLACED