Home » Reviews » Review of The Diaghilev Festival at London Coliseum 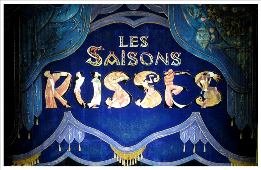 When talking ballet, there are certain names that should always be mentioned and noted; Sergei Diaghilev is one of these. The Russian ballet impresario created Ballet Russes, and arguably brought Russian Ballet to Western Europe with the first independent ballet company not associated with a national opera.

Nowadays, many of Diaghilev’s ballets are still in the repertoire of ballet companies around the world, from well known works such as Sleeping Beauty to lesser known, short works such as The Firebird and Scheherezade. Celebrating Diaghilev and Ballet Russes was at the forefront of the Diaghilev Festival and Les Saisons Russes Du XXI-eme Siecle (Russian Seasons of the XXI Century) at London’s Coliseum Theatre this week, home of English National Opera and English National Ballet.

It wasn’t the ENB on stage this time however, the young Russian ballet and opera company Moscow State Music Theatre for Young Audience, took to the London stage for the first time, complete with their full orchestra, for a triple bill evening of Diaghilev ballets, and coincidently, the choreography of Mikhail Fokine.

Petruska
This traditional Russian folk story tells of a sad, scruffy clown in love with a beautiful ballerina, who incidentally prefers a lavish Moor, all of whom are under the hand of a cruel master puppeteer. Their story is played out with the backdrop of a St Petersburg festival and a variety of street performers.

The company of Moscow State Music Theatre were in full force for the festival scenes displaying wonderful traditional Russian dances with huge energy and gusto. The roles of Petruska, the Ballerina and the Moor were beautifully danced, with Petruska in particular tugging at the heartstrings with his woeful performance.

Chopiniana / Les Sylphides
The epitome of the romantic style of ballet, Chopiniana (Russian name) is set to the music of Frederic Chopin and is deliberately simple to emphasise the style and beauty of the era. In the typical, romantic environment of ghostly sylphs, a young man, known as the poet, simply dances with the beautiful creatures.

Classic ballet-blanc can be captivating, and the company certainly did it justice, performing in perfect synchronicity and harmony. The soloists showed strength and grace with a very strong technical ability.

Polovtsian Dances
Here, Moscow State Music Theatre really came into their own and shone as a talented new company. Taken from the second act of Alexander Borodin’s opera, Prince Igor, the opera side of the company accompanied the dancers, and quite simply blew me away.

Dancing for love and conflict, the passion is clear in Fokine’s original choreography. Once again highlighting tradition within the work, the company goes from strength to strength and finishes on a high with a mass dance and choral climax.

The Diaghilev Festival is a wonderful showcase of the Moscow State Music Theatre for Young Audience, and shows the company as talented, strong and set for a bright future. Although, in the name, they’re aiming to open theatre up to younger audiences, there’s no uncertainty that the company can bring ballet and opera to a wide range of audiences. Whatever the future holds, I’m certain that it will be successful and hopefully widespread.

There’s a warm and welcoming presence about Katie Arnstein anyway, although offering a sweet to audience members as we filed in helps too. Also, the … END_OF_DOCUMENT_TOKEN_TO_BE_REPLACED

The on-stage tiling makes it feel very much like certain scenes are set in a swimming pool, which may be stating the obvious but in a performance … END_OF_DOCUMENT_TOKEN_TO_BE_REPLACED

“I am a little bit of a nerd,” smiles Joe Sellman-Leava, playing himself, or at least a version of himself he’s willing to portray to audiences at the … END_OF_DOCUMENT_TOKEN_TO_BE_REPLACED

This is the kind of show that will preach largely to the converted, if not the choir itself, although this is probably by default rather than design. … END_OF_DOCUMENT_TOKEN_TO_BE_REPLACED

Cabaret is not just the name of a highly successful musical and film, but according to my good buddies at Wikipedia is a form of theatrical … END_OF_DOCUMENT_TOKEN_TO_BE_REPLACED