You are here: Home / Reviews / Review of Driving Miss Daisy at Richmond Theatre 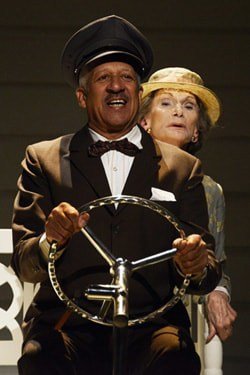 I couldn’t help, sitting in the auditorium waiting for Driving Miss Daisy to begin, but think of the iconic theme tune to the 1989 motion picture. It’s just so memorable. This production from Theatre Royal Bath sees Dame Siân Phillips take on the role of Daisy Werthan and Derek Griffiths play Hoke Colburn – these are parts previously played by the likes of Jessica Tandy and Dame Angela Lansbury, and Morgan Freeman and James Earl Jones respectively. Completing the trio is Daisy’s son Boolie (I never tire of saying that I just love American names), played brilliantly by Teddy Kempner.

I suppose it is a good thing that there is, as the play’s writer Alfred Uhry points out in a note in the show’s programme, that “half of the audience seeing the play” have no personal experience of “how deep the chasm was between the races” in the period when the play is set. But in this thirtieth anniversary year of the original off-Broadway production, the play still has much relevance. Okay, so it’s no longer the case that non-white people can no longer use certain public conveniences in the United States (a point of contention in the play), but it is clear from the recent Black Lives Matter that there is still race-based injustice going on.

The set is very light and airy, very bright but devoid of colour shades, as though suggesting things are black and white in more ways than one. At first, I thought Dame Siân’s Miss Daisy could have been a tad angrier in the early scenes, as she didn’t seem as indignant as the dialogue suggests, especially with regard to maintaining her independence into retirement. But the temperature steadily increases, and her approach is, upon reflection, dramatically better than being explosive right at the start and then leaving little, if any, room for the character to develop.

The costumes are excellent and suitably seem the sort of attire the characters would have worn, whether the play’s action is in 1948, 1973, or somewhere in between. A long car journey alone justifies the show’s title, and proves surprisingly compelling through a combination of simple but effective staging and hugely talented acting.

It’s a play that has stood the test of time, and remains a thoroughly compulsive study into racial and class divisions. It’s a very personal story too, and I had some sympathy for Miss Daisy in her uncompromising commitment to her principles. They even provide a source of amusement on occasion. The action slows up noticeably in the second half, though given the age progression of all the characters as the play races through the years, it all fits well enough.

Being based in London, I’m not really in a position to verify for certain whether the accents in this production are authentically Atlantan, though I think the Southern American drawls could have been more pronounced. This is more than outweighed by the comedy value in the conversations between Miss Daisy and Hoke. The play has a dry sense of humour for the most part, but there are some excellent punchlines. The ending, as ever, is heartwarming and poignant, and it’s done well here, without melodrama. The accompanying music was mercifully sparing, too, as the production rightly puts its trust in its actors to deliver all of the required emotions demanded by the final scene.

Some suspension of disbelief is required to appreciate the ‘car’ as an on-stage car. But I am grateful that this production, which could theoretically run for just over an hour and a half straight through, retains an interval. It actually adds to the level of intrigue. I knew what was to happen in the second half, as did many others in the audience on opening night, but still wanted to discover how this production would portray proceedings. That such a familiar tale came across as so fresh and vibrant is a testament to the high quality of this production. A deeply moving show.

This brand new production of Pulitzer Prize, Academy and Tony Award winning playwright Alfred Uhry’s acclaimed comedy drama, marking 30 years since the play first premiered, is at Richmond Theatre Mon 11th – Sat 16th September, 2017. From its landmark off-Broadway production in 1987 to the remarkable success of the 1989 film version, which was the winner of four Academy Awards including Best Picture, Driving Miss Daisy has touched the hearts of millions worldwide. Press invitations for review are extended for the opening night performance on Monday 11 Sep at 7.30pm

Starring Dame Siân Phillips as Daisy and Derek Griffiths as Hoke with direction by Richard Beecham. When elderly widow Daisy Werthan crashes her car one day in 1948, her son hires her a chauffeur, an African-American named Hoke Colburn. Daisy and Hoke’s relationship gets off to a rocky start, but as times change across a 25 year backdrop of prejudice, inequality and civil unrest, a profound and life-altering friendship blossoms in this acclaimed comedy drama.