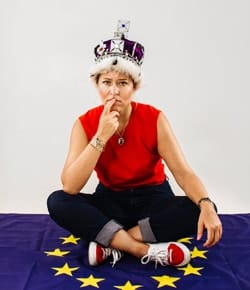 Political plays are all the rage at the moment and taking centre stage in the narrative is the effects of Brexit – even the Archers talk about it every so often. A lot of these plays irritate me as they are based on supposition as to what will happen once the hard/soft/slightly flabby at the edges Brexit goes through – something that nobody knows right now. However, for a really good one-act play about the life – past, present & possibly future – of a European migrant, then I can heartily recommend Cecilia Gragnani & Jvan Sica’s Expat Underground which I saw at the Tristan Bates Theatre.

This charming one-person (well sort of, as I will explain in a moment) production is the story of Cecilia, a young girl who decides to leave her Italian village and, after a sojourn in Paris, decides to move to London to seek her proverbial fortune. We follow her adventures from the moment she arrives and travels to her first – truly gross sounding – home and her first encounter with the spirit of London (voiced by Steve Wickenden) who sets her straight on some of the etiquette of being a Londoner. As she spends more time living here, she throws herself into London life and becomes a true Londoner in all but name. Then the 2016 referendum arrives and the ‘moment of madness’ becomes government policy leaving Cecilia confused about her place in the world and fearful of what happens next.

Cecilia Gragnani & Jvan Sica obviously have a real affection for London coupled with a wonderful ability to observe and document the idiosyncrasies that make the British who they are. There was many a chuckle as the voice of London explained to Cecilia how she needed to walk down the road, and what she needed her inner monologue to be repeating in order to gain her place on the pavement – words I’ve often said to myself when trying to get from one end of the street to another in the West End. There is a really interesting moment when Cecilia realises that she has stopped being Italian and is now really a Londoner. It’s a strange thing when it happens but it’s very true. I have friends from Scotland and the North of England who, whenever they visit their family, are told they are no longer a true Scot or Northerner. I know they would easily identify with Cecilia’s questioning of where her home is now. Once London has you in its power, it never lets go.

Now, this is making it sound like Expat Underground is a tale of doom and gloom. It really isn’t. If anything it’s a fabulous story of hope and self-belief that has a lot of extremely amusing aspects. Cecilia has met some great characters in her time in the UK and encountered some very odd things. One of the funniest, is the wonderful book that Cecilia quotes from on what it is like to be from the UK and to live here – Life in the United Kingdom: A Guide for New Residents, released by the civil servants of the Home Office who, apparently have a better sense of humour than I had given them credit for.

All in all, Expat Underground is one of those plays that prove the British are jolly good at laughing at themselves. The humour is never malicious but has a real affection to it and Cecilia delivers it really well. My only slight criticism was that there were times when the laughter was so strong it covered the start of the next sentence. Getting that timing right is not the easiest thing but, as they say on “Just a Minute” ride the laugh and you will be OK.

I’m really hoping that Expat Underground is a work in progress as I would love to see the show in a couple of years once Brexit has gone through when everyone has finally woken up and realised what they’ve done. However, for now, Expat Underground is an engaging play that explores a controversial subject in a light-hearted and yet quite deep manner giving the audience plenty of food for thought when the curtain comes down.

EXPAT UNDERGROUND tells the comic story of the encounter between Cecilia, a modern migrant, and London, contemporary El Dorado craved by generations of young Europeans.

Cecilia arrives in London to try and create the future she has in mind: becoming British while remaining deeply Italian. Among hundreds of unlikely jobs, encounters with the most varied personalities and Brexit’s threat, Cecilia finds herself alone in facing the chaos and thousands of lights of a multi-ethnic London, where making one’s desires become a reality turns into a titanic endeavour.

It is the duty of every citizen to answer the call to support and protect the United Kingdom and its allies so last night, while the rest of the … END_OF_DOCUMENT_TOKEN_TO_BE_REPLACED

Harold Pinter only ever wrote one novel. And, let's be honest, he didn’t rush into this literary endeavour. He started it in 1950 and the book was … END_OF_DOCUMENT_TOKEN_TO_BE_REPLACED

How far would you go for the people you love? What lies would you tell? What sacrifices would you make? That’s the question at the heart of The … END_OF_DOCUMENT_TOKEN_TO_BE_REPLACED

“All political lives, unless they are cut off in midstream at a happy juncture, end in failure, because that is the nature of politics and of human … END_OF_DOCUMENT_TOKEN_TO_BE_REPLACED